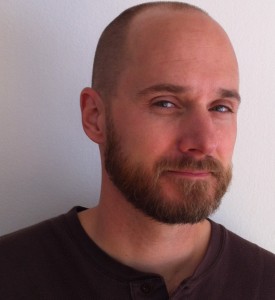 Scott Kolbo’s performance pieces, video art, and print series are populated with fiery preachers, bellicose ideologues, hapless schmoes, intrepid neighborhood kids, and swirls of flocking crows. The works often combine the hasty, mass-produced look of digital art with lovingly attentive drawings of human figures and faces. His drawing style combines a fleshy naturalism with a lively, comics-influenced sense of movement and story—he seems to owe as much to underground cartoonist R. Crumb as to Georgian printmaker William Hogarth or Renaissance portraitist Hans Holbein. His combined attraction to new technologies and dedication to the handmade result in an art that feels at once edgy and warm, both provocative and generous-spirited—largely because he tends to make himself, rather than the viewer, the butt of the joke. His approachable but sometimes elliptical narratives (he likes to work in series) dramatize the Christian virtue of humility—in a spirit of playfulness rather than self-loathing. Kolbo says he wants his work to be experienced in person, but we think the web can give you at least a hint of what makes it so appealing. This is work with which it’s a pleasure to spend time.

Scott Kolbo was born in Washington State in the early seventies and grew up the Northwestern United States. As a kid he spent countless hours drawing to stave off boredom, and drawing continues to play a dominant role in all his work. He became interested in the tradition of satire by looking through art books in the library and realizing that he was most attracted to prints with funny looking people in them. He received a Bachelor of Fine Arts in Painting and Printmaking from Boise State University in 1996. He received a Master of Fine Arts degree in Printmaking from the University of Wisconsin-Madison in 2000.

Scott lived in Spokane Washington for twelve years while working as a Professor at Whitworth University, and in 2012 he took a faculty position at Seattle Pacific University. He teaches a variety of courses including; Printmaking, Drawing, Design, New Media, and Contemporary Art History. His interests revolve around the study of culture, aesthetics, literature, film, and the tension between religious faith and contemporary art. In his studio art work he is interested in the incorporation of new technologies into traditional art making strategies and mixing together elements from high and low culture. Scott exhibits his work locally, nationally, and in web-based formats.

I am currently working on completing a series of prints, drawings, and video based installations that focus on a single location – the classic “back alley” that exists in many urban neighborhoods. I am creating loose narratives about the kids who run through these spaces (largely unsupervised and free from adult interference) as well as the adults who utilize these spaces for activities that are less positive. The project is intended to examine the world we make for ourselves and for others, and how these human-made environments influence the people who inhabit them.

I have always loved the idea of using visual art to create narratives. My work is grounded in the historical figurative tradition of printmaking and drawing. Much like a writer or filmmaker I have built up a pantheon of reoccurring characters and environments that allow me to investigate some of the social, political, and ethical issues that confront private individuals and communities in contemporary society. I prefer to fragment my stories rather than rely on a traditional narrative structure – so most of the pieces I produce are vignettes and brief glimpses of a larger slapstick comedy world. For example “Heavy Man” is a sad-sack middle class man who mysteriously becomes spontaneously heavy when he interacts with some of the more disturbing elements in our culture. He breaks office chairs, falls through floors, and wanders around lost in a haze of doubt. Other characters allow me to explore issues related to harsh political rhetoric (the Escalation Project), ideological zealotry (Jeremiah), homelessness and poverty (Inga), and how the human environment impacts the people who live in it – particularly children who left to their own devices in challenging urban environments (Alley Kids).

My recent studio practice is focused on creating digitally manipulated animations that are projected over static wall drawings. I am attracted to the tension that is created when fuzzy and “cheap” digital elements interact with sharp and beautiful hand drawn marks. The digital elements in my prints, drawings, and hybrid video projections are constantly flickering and morphing, but in an indistinct and shallow way that comments on our current predicament living in a world dominated by glowing screens. The resulting documentation is a record of both the performance as well as the drawing – using the means of mechanical/digital reproduction to create experiences that are impossible to reproduce through mechanical or digital mediation. My ultimate goal is to create art objects that have to be seen in person to be authentically experienced.