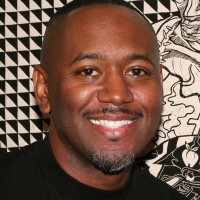 “There’s a lot we haven’t dealt with in our soul, so I like to deal with it in my artwork,” says printmaker, sculptor, and graphite artist Steve Prince. That concept of the collective soul (and its collective burden) is essential to Prince’s work and to his sense of mission as an artist. His series the Katrina Suite, featured in Image issue 78, is the perfect example: New Orleans native Prince (who had departed his hometown just a day before the storm hit) channeled New Orleans funerary rituals, the diasporic traditions, and his own familiarity with the weight of the city’s history to articulate a culture’s mourning and resurrection. The Katrina Suite takes three parts, beginning with Katrina’s Dirge, a song of mourning that “complicates the impulse to shelter behind the so-called ‘universal’…the piece inaugurates the Suite’s persistent request that viewers come face-to-face with Katrina’s specificity,” says Beth McCoy in her Image essay on Prince’s work. Second in the Suite is Katrina’s Veil: Stand at the Gretna Bridge, which revisits the infamous incident at that bridge during the storm’s aftermath, visually linking it to March 7, 1965’s Bloody Sunday, when civil rights demonstrators were attacked at a bridge in Alabama. Finally, in Second Line, Prince created scenes of festival, acknowledging the city’s rebirth. Some of the pieces in the Katrina Suite, deeply engaged with a public loss, were actually created in public. Prince visited four U.S. cities, locations to which the post-Katrina diaspora flowed, and set up his work in outdoor spaces, where he fielded questions from curious passersby. This was only fitting, as Prince’s work insists on inviting the viewer in: his images sound the cry of the mountaintop prophet, come down to speak truth to power and mercy to suffering. Each of his pieces holds a story, a truth that must be told. Narratively detailed and brocaded with symbolism, but created with a unique clarity of purpose, his images shine forth like so many stained glass windows.

Steve A. Prince is a native of New Orleans, LA and resides in Meadville, Pennsylvania. He received his BFA from Xavier University of Louisiana and his MFA from Michigan State University. Prince is an educator and has taught privately, middle school, college, and is currently an Artist in Resident at Allegheny College. He has shown his art internationally in various solo, group, and juried exhibitions, at the Contemporary Art Center of Virginia, the National Gallery of the Bahamas, the Museum of Cultural Arts Center in Santa Catarina, Brazil, the Grand Rapids Museum of Art, the Portsmouth Courthouse Museum, Hampton University Museum, the Museum of African American Culture in New Orleans, Xavier University of Louisiana Gallery, Charles H. Taylor Art Center in Hampton, and the Peninsula Fine Arts Center, to name a few.

Prince has created a number of public artworks, including a life-size bronze bust of 1967 Medal of Honor recipient Ruppert Leon Sargent titled “In his Hands,” in Hampton, Virginia, a 6′ x 6′ x 10′ aluminum sculpture titled “Open Expressions” in Richmond, Virginia, a 4′ x 24′ woodcut entitled “Alexandria” in Alexandria, Virginia, a 3′ x 30′ woodcut titled “All That Jazz . . . Making New Connections” in Richmond, Virginia, and a 15′ stainless-steel kinetic sculpture titled, “Song for John” in the Coliseum Central district in Hampton, Virginia. Prince is the recipient of numerous awards and honors, including the 2010 Teacher of the Year for the City of Hampton Virginia, 2008 Best in Show Award at the Charles H. Taylor Art Center “Artists Who Teach Juried Show,”  2007 Best in Show at the Southeastern Virginia Arts Association Juried art show, the 2007 Partners of the Americas Artist in Residence in Santa Catarina, Brazil, a 2006, 2007, and 2013 Trawick Prize semi-finalist, the 2001 and 2004 Best in Show at the Contemporary Art Center of Virginia Beach, and the 2004 Award of Achievement at the Peninsula Fine Arts Center Biennial.

In addition to being an accomplished lecturer and preacher in both secular and sacred settings, Prince has conducted workshops internationally. He has spoken at various colleges, community centers, museums, galleries, and addressed congregations of various denominations. Steve works primarily in printmaking and drawing. He uses its black and white language to express a remarkably original and innovative vision. The many rhythms of New Orleans’ cross-fertilized culture reflect throughout Steve’s art. The rich traditions of art, music, and religion pulsate through Steve’s woodcuts and drawings. They rise up as metaphors and messages that guide the viewer into the depths of his expressive imagination. Steve’s art becomes a window that leads you into new and unseen worlds. His work has been characterized by the New Orleans art critic D. Eric Bookhardt as “startling in its ability to elucidate inexplicable worlds within worlds, in what amounts to an almost unearthly scrimshaw effect.”

It is Steve’s faith that calls him to be an artist. His work is an unending exploration of faith and its relationship to his life, his culture and his community. To Steve, “We are all living epistles, whether we want to be or not.” In “Urban Epistles,” a series of prints that was exhibited in the Grand Rapids Art Museum, he visually interprets the thirteen epistles of Paul, recontextualizing them within a contemporary, urban framework. His work becomes an “open letter” to American culture, calling it “to acknowledge its role within the fabric of the American family and to redress race, representation, and education with a new raiment woven of respect, truth and equality.”

He wants to take his message to the streets. That’s where Steve’s visual ministry is focused. That’s where his church is. His art becomes a traveling evangelism show for our contemporary culture, providing answers for today’s troubled world. But it also becomes a celebration; a celebration of that very broken yet extremely beautiful world. The art becomes a bridge to help people find their way from that brokenness to the beauty Steve so clearly sees.

I am working on a series of linoleum cuts titled “Old Testament.” The series hinges on the premise that true love is like an old testament made new each day. I plan to make an image for each of the thirty-nine books of the Old Testament plus five images for the book of Psalms. The series is laden with subtle symbolism and narrative on couples and relationships. The project is semi-autobiographical as I reflect upon the many years I have been married. I am looking critically at the seeds planted in the old soil of our beginning and interrogating what has manifested from this marriage. I am interested in understanding God’s unconditional covenantal love he has for us on a spiritual level, and conversely, understanding how we live out that creed in the natural sphere.

I am revisiting a series I created several years ago titled Icarus Avenue. It is a fictitious tale of a woman named Jessey who receives a calling from God to become an evangelist within her community and spread the Gospel in the face of the violence that is consuming its inhabitants. I utilize the Stations of the Cross as a storytelling mechanism to demonstrate how we can follow in the steps of Christ to do the work necessary in our communities. The series was born from my work with my wife as youth directors at a small church in Southeast Washington D.C. Our pastor, armed with a bible in her hand, started her ministry in the prisons and worked her way into the community, consecrating corners and ministering to the lost by pointing them to Christ. The character of Jessey was modeled on the true life-work of my pastor and the series is a sort of blueprint for an evangelist in the field doing the work of spreading the “good news.”

I am continuing work on my series Urban Epistles which was birthed from my study of the thirteen letters attributed to Paul in the New Testament. In this series of large scale linoleum cuts, I recontextualize the letters and utilize their truths to grapple with modern moral dilemmas, issues of race and representation, hegemony, gender concerns, etc., through a Christian lens. I utilize the language embedded in Christian iconography and fashion a contemporaneous language that speaks to contemporary culture. Each image in the series is layered with symbolism to offer a space for us to have an open dialogue about the issues in society but most importantly, the artwork is a call to action. We must get up from our pregnant tables overflowing with bounty and be active in the lives of people regardless of ethnicity. I postulate in the series that we are all living epistles. As Christ said, we have been called to be fishers of men. As Paul proclaimed we must put on the armor of God, because the battle is not against flesh and blood, but against principalities. With my art, it is my hope that it will admonish, uplift, challenge, enlighten, empower, and encourage us to be more like Christ.