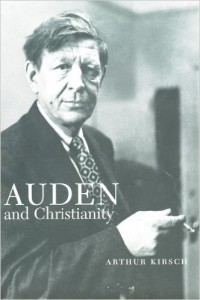 I’m always a few months behind in my magazine reading, so it was only recently at breakfast that I opened the December 7, 2007 issue of The New York Review of Books to Edward Mendelson’s review-essay, “Auden and God.” Mendelson, who is Auden’s literary executor, reviews Arthur Kirsch’s Auden and Christianity (Yale U.P.) — praising the book unequivocally but scarcely referring to it in his own informative overview of Auden’s religious life. Though I’ve long known about Auden’s Christianity, something about Mendelson’s presentation of it so stimulated me that I was zinging as if I’d slogged down four cups of coffee (though I’d had none: doctor’s orders).

Mendelson’s motif is that the core of Auden’s Christianity was “Thou shalt love thy neighbor as thyself.” Auden went through various phases of understanding of the commandment, but it remained the ground of his religious belief. So, for instance, here is Auden on prayer :

To pray is to pay attention or, shall we say, ‘to listen’ to someone or something other than oneself. Whenever a man so concentrates his attention — be it on a landscape, or a poem or a geometrical problem or an idol or the True God — that he completely forgets his own ego and desires in listening to what the other has to say to him, he is praying.

Forgetting one’s own ego, truly attending to someone or something other than oneself: this was Auden’s sense of loving one’s neighbor. One manifestation, writes Mendelson, was that “Auden’s passion for proper names in his poetry had a moral and theological point: like prayer, it was a form of attention. A proper name was a sign of personal uniqueness, and Auden used the word ‘miracle’ to refer to anyone’s sense of the unique value of their own unpredictable individuality. ‘To give someone or something a Proper Name,’ he wrote, ‘is to acknowledge it as having a real and valuable existence, independent of its use to oneself, in other words, to acknowledge it as a neighbor.’… When human beings imagine a beholder who finds such value everywhere, they think in terms of God, or as Auden wrote in another late poem [the 1965 ‘Epithalamium’], ‘the One…/ Who numbers each particle/ by its Proper Name’ — a deity who knows the personal name of every electron in the universe, rather than thinking about them in statistical terms.”

“To give someone or something a Proper Name”: I’d offer this as a statement of what great art does. Art removes us from our petty selves and opens us to the unique reality of the other. It is in this sense that a religious impulse is at the core of all great art. Like the God “Who numbers each particle/ by its Proper Name,” art attends to the miracle of the particular. It is this impulse of art that Czeslaw Milosz honors in his poem “With Trumpets and Zithers”:

I wanted to describe this, not that, basket of vegetables with a redheaded doll of a leek laid across it.

And a stocking on the arm of a chair, a dress crumpled as it was, this way, not other.

I wanted to describe her, no one else, asleep on her belly, made secure by the warmth of his leg.

It’s the impulse I find so compelling also in the poetry of Pattiann Rogers.

Mendelson notes Auden’s acute awareness of how far short he (like the rest of us fallen mortals) usually came of truly living the commandment to love one’s neighbor. But holding the commandment front and center kept him honest about his moral lapses into ego-driven self-regard. “The same idea,” Mendelson adds, “is behind a statement he once made that the purpose of art, to the extent that it has one, is to make self-deception more difficult, and ‘by telling the truth, to disenchant and disintoxicate.’”

With such a bracing sense of art’s mission, who needs coffee?