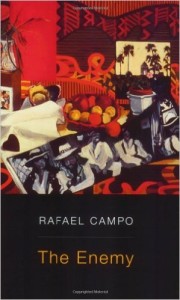 Reading Rafael Campo’s new book of poems, The Enemy (Duke UP, 2007), makes me appreciate what intriguing religious poetry can come from someone outside of conventional religious practice.

Campo grew up in the Catholic church and culture of his Cuban-American community, but — according to his memoir-essay in The Poetry of Healing — he left church-going when, as a gay teenager, he heard homosexuals denigrated from the pulpit as “degenerate.” Now in mid-career as a physician and poet, he has (as far as I know) kept his distance from the church. At least in practice. In his poetry, he is comfortable drawing on Catholic language for its spiritual resonance.

In this volume, for instance, he chooses “Absolution” as the title for a poem about suffering from a headache, which spreads into the “shapeless troubles” of “young soldiers killed, / the rising price of crude” and other troubles named (as synecdoche for all human suffering), which melts into tender images of being cared for in our human fragility, finally yielding to a glimpse of brief alleviation of pain — that is, of the “absolution” of the poem’s title.

Many other contemporary poets also use this titling technique: choosing a religious term as title for a poem apparently on another topic. When this technique works well, as it does in “Absolution,” the religious title term gathers the entire poem’s experience up into another order of being. Blesses it, I’d even say.

Campo’s poetry has a light-heartedness at the same time as it embraces heavy issues like illness, war, death. So his religious language can be jesting without undercutting its genuine import. The volume’s final poem, “Sick Day,” has exactly this teasing relation to the language of Catholic practice, which is the poem’s primary image source and so in a sense its subject. The person lying sick in bed hears “the clinking” of the recycle pick-up outside as a “benediction”; a church’s bell tower within view is apostrophized as “O pinnacle /… continue your protection of the weak.” As we all perhaps tend to do when sick, the patient muses on life’s transience, leading to a burst of liturgical language: “Holy, holy, / holy Lord, it is February, weeks/ from when the sun will blaze like Florida.” There’s a playfulness in this plea, but still the religious language seems meant to hold its weight, and especially so in the poem’s closing lines bemoaning our “imperfect bodies”: “Feed a fever, starve a cold: still, we hunger, / so we pray with our sore throats Grant us peace.”

I’d be misrepresenting Campo’s work if I implied that all or even most of his poems draw on explicitly religious language. They don’t. Yet there is no poet now writing who is more compassionate, and none more devoted to putting poetry’s craft (of which he is a master) at the service of a vision of what it means to be a good person in a world pretty full of bad stuff. We Christians would say in a fallen world. I suspect Campo wouldn’t — and when I’m engaged by his poems, that doesn’t matter.