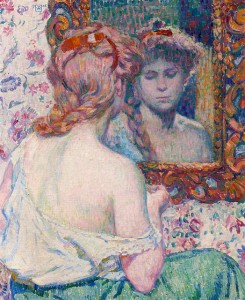 I’ve just read a thirty-page article called “Whitman Music: The Problem of Adaptation.” A critical analysis of musical settings of Whitman’s poetry, the article was published in the 1965 issue of Books at Brown, a journal devoted to materials in the Special Collections of Brown University’s library. The author is Peggy Z. Rosenthal.

What the contributors’ bio omits is that Mrs. Rosenthal, as Peggy Zierler, studied music composition all through elementary and high school, while writing poetry for the high school literary magazine. Hence her interest, for her college honors thesis, in musical settings of poetry. (It was her thesis advisor who suggested basing her thesis on the Brown library’s unusual collection of musical settings of Whitman.)

Nor does the bio mention that Peggy Zierler married Mr. Rosenthal just before her senior year of college, commuting to Brown from their apartment at MIT, where he was doing graduate work. In order to get married as a Pembroke student, she needed a permission letter from the Pembroke Dean. The letter also stipulated that Mrs. Rosenthal would not be allowed to spend the night in the Pembroke dorms; her experience as a married woman would not be a good influence on her (supposedly) virginal peers.

After Brown, Mrs. Rosenthal went on for a doctorate in literature, where parts of her dissertation on Whitman’s poetry were published in scholarly journals in the early 1970s, under the name of P. Z. Rosenthal. She chose the initialed name in order to disguise her gender. Women in academia were still few, and considered intellectually inferior by the male majority, so she strategized that a non-gendered name would be more likely to gain acceptance by journal editors.

While at graduate school, an astoundingly self-absorbed immaturity moved her to divorce Mr. Rosenthal in order to marry George Dardess. Influenced by the newly emerging feminist movement, she declined to take Mr. Dardess’s last name, saying huffily to herself: “I’ll be damned if I’m going to change my name every time I change husbands!” (Irony: She has not changed husbands. And after forty-five fulfilling years with Mr. Dardess, doesn’t plan to.)

(Historical footnote: Once she had married Mr. Dardess, Social Security and the IRS immediately asserted that she had changed her name to his. This was 1970. In order to legally keep her name—which of course wasn’t “her” name but her first husband’s—she had to go before a judge and make a case for this radical request. The judge unhappily granted it. “But which last name will you give your children?” he whiningly asked.)

As a young academic beginning her college teaching career at the start of the women’s movement, the now Dr. Rosenthal taught courses on women writers and wrote a couple articles on the new field of feminist criticism. Now, thanks to feminism, she could “come out” as a woman, so a simple Peggy Rosenthal authored these pieces.

But then she left academia to pursue writing full time. Her first attempts were what she (pretentiously) thought of as “structuralist fictions,” which were published under the name of Piesch in self-proclaimed post-modern literary journals. The alias of Piesch was a family joke. Within their extended family, members had taken to calling each other by the initial of their first names. So Peggy’s family name was P, which her sisters had affectionately extended to Peesh. Thinking that a Germanic form would look more professional, she altered the spelling for the publication of her experimental fictions.

Then came 1983, and the event that put a pause on the play of aliases.

In 1983 she was baptized. This changed not her name but her entire being. She became a new creation in Christ. Naturally, this changed the focus of her writing. No longer pathologically self-absorbed, she looked out on the world and saw injustice and war. Through the 1980s, as Peggy Rosenthal, she wrote impassioned articles against the nuclear arms race and for nonviolent transformation of society.

When peace (supposedly) broke out all over with the end of the Cold War in 1989, she decided to return to her literary interests and combine them with her newly-developing Christian faith. So a string of books and articles on the spirituality of poetry came out, beginning in the 1990s.

Peggy Rosenthal stayed put as her professional identity. But those irrepressible aliases kept multiplying in other realms. As of this writing in 2015, she is Abuelita to her granddaughters, and a teasing Sr. Peg to her Trappist monk friends. She’s abuelitapeg on twitter and grannypeg on ravelry (the knitting social networking site).

As for the uncountable usernames on a myriad of other websites, she has long given up trying to remember them. Who is she on Amazon? On Paypal? On her Visa account? On etsy? On Skype? She shakes her head at the dizzying possibilities.

But fortunately none of these usernames has anything to do with her true identity. The only name that matters is the one God addresses her by in the Song of Songs (1:16): “my love.” She notes this, then pauses to reflect: God addresses everyone with exactly this name!

Her true identity—and mine—we acknowledge with a grateful sigh, lies not in a crafted individuality or a hodgepodge of aliases but in our shared humanity as God’s beloved.