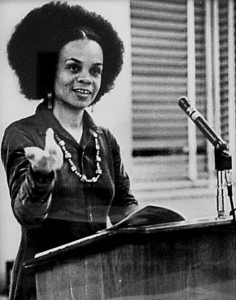 The languages she spoke. The ground on which she stood, singing her suffering, power, anger, love. Between the painful past and the dreamed of future: her presence. That’s what I remember. More than the timber of her voice. Definitely more than the poems she read that Saturday afternoon.

Fall, 1977. McGlinchey’s, a restaurant and bar in downtown Philly. Having finished, for the time being, the life that had been programmed for me—I had recently graduated from Glassboro State College (now called Rowan University), I was discovering and inventing my identity in Kiryat Shemonah, Tzfat, Jerusalem—Israel! Then, eighteen months into my new life there, I was home (or was I away from home, visiting America?) for a short visit.

As students at Glassboro, my poetry friends and I often went to McGlinchey’s. After scouring the poetry shelves at Middle Earth Books, we drank shots and beer and talked poetry.

Then, while we waited underground past midnight for the High Speed Line to carry us over the river to Jersey, we read poems to each other from books we had purchased that night, and sometimes we kissed and sometimes we roared and sometimes we dropped to our knees and pleaded with the universe to escort us home and sleep with us and rise in the morning to fried eggs and Ginsberg, Merwin, Bly, Kinnell.

Two poets read at McGlinchey’s that autumn afternoon. A poet whose name I don’t remember and Sonia Sanchez. The first poet was a big guy with a booming voice. He stood at the podium and belted out poems. But as commanding as he might have hoped his performance would be, dozens of conversations continued while he read, and pint glasses knocked when they were set down on table and bar.

Then Sonia Sanchez took the room. No podium for her, she stepped into the crowd, which parted and formed a circle around her, leaving enough space for her to breathe in life, breathe out poetry. She was, as I recall, a small woman, her voice soft. Yet, as she spoke her poems, not another sound could be heard: not a whisper or cough, not a glass or spoon. We were drawn into her circle, dropped and uplifted by her vision and voice.

Did she read “a chant for you / brothas & sistuhs”? Here’s an excerpt:

listen to the tears
flowen down my blk / face

I don’t remember which poems she read. But I do remember listening to her read, chant, sing out of the matrix of identities into which she was born, identities which often, because of this nation, these people among whom she lives, are the very causes of her suffering.

Listening to her that afternoon, I saw myself once again as if for the first time: a Jew who should write poems as a Jew.

After her reading, I thanked her for her work, her very way of being that had transported me, for a moment, by means of her art, into her world, her suffering, her love, her challenges as a black, Muslim (for a few years she was a member of the Nation of Islam), American, woman poet. When I told her that I was Jewish and was home from Israel for a brief visit, she said this:

The only way you and I can meet is when you write out of your experiences as a Jew.

Sonia Sanchez made me a Jewish poet.

I’m thinking about this today because of a conference from which I just returned, the Association for Contemplative Mind in Higher Education’s annual conference, this year on the theme of “Building Just Communities.” Held at Howard University, the conference created an opportunity for participants to look deeply and honestly at how contemplative practices in higher education could be used in the urgent work of creating just communities on and off campus.

The conference challenged me in many ways. Not least was what came up for me during a contemplative exercise led, at the start of the second full day, by the organization’s president, Rhonda Magee, an African-American law professor whose work includes research on mindfulness and the pedagogy of race and social justice. Rhonda asked us to look inside and see what questions were coming up for us that morning.

I closed my eyes, let my mind settle a little. Before long, this question arose: Have I led, at work, in the community, at home and abroad, with my Jewish identity? Has that been a way to protect myself from having to see myself as what else I am: a white, American, man? Wherever I stand, those are in the room with me, too!

Suddenly, I saw my life exposed in a new, troubling light. But I also felt liberated and motivated to learn about the privileges that come from the identities into which I was born and to learn more, much more, about the experiences of those who have not been born with these privileges. What I may make of this late development in my life, I cannot say.

I pray, however, that I may find a way, however small, to add my effort to the efforts of those who have for many years been working to create a just, inclusive, loving world for all.