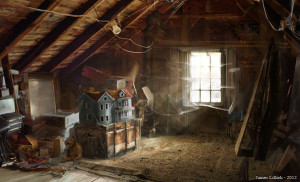 When my cousin became a Dominican sister, she gave away all of her belongings. My sister and I were invited to come and shop in her closet and salvage any clothes we wanted before they went to charity. More valuable items she bequeathed to family members, and I was the lucky recipient of a pretty pair of lapis lazuli earrings, as well as a Honda Civic, which I, in turn, drove to Rhode Island to discern my own calling to join a religious community there.

Ultimately, I didn’t stay, but I met my husband’s sister there, and she set me up with the man I would marry less than a year after my return.

I never had it in me to give away all that I own, such a sad and rich young woman was I.

So little has changed.

My husband and I have just cleaned out our attic. Everything that was in there is now gone, so that we might begin the process of converting it into another bedroom for the kids, who now sleep stacked like sardines in the two bedrooms upstairs.

What became clear as we went through the piles is that, contrary to all my big talk about detachment and anti-materialism, I’m the packrat in the family.  I’m the one with fourteen Sterilite bins in the attic.

Among the items I threw away:

I was in the process of reading through a box of folded notes passed to me from classmates in middle school when my husband made a move to carry all remaining items out to the burn pit.

“Do you understand that you are asking me to part with my identity? This is going to take some time,” I said to his back as he left the room with another bag of recently coined garbage.

He barely had a yearbook to show for the years of his life before I knew him. Early on when we were dating, I was annoyed that he didn’t have more baby pictures because I wanted to see what kind of babies we might make. Now that that mystery is solved, it’s true, I’ve had little interest in his artifacts.

When I was young, I believed that these objects made me worthy of love. They were the sacraments of secular childhood, the outward sign of my interior life, my interests, my identity, my victories. I lived from ritual to ritual, from the slow build of studying for a final to the release of passing it, from anticipation of a phone call or a school dance to the moment of glorious fulfillment when there would be communion with my fellow supplicants.

I believed that some day, the important people of my future life would be glad to receive all of this testimony, that they would follow the glistening trail from this box to that, this notebook to that one, and the objects would witness on my behalf, ensuring that I would never be reduced to a subjective memory in someone else’s mind.

Here in the Sterilite bins was my eternal life.

Of course, I knew nothing about love when I was a child, having only been the recipient of it. Offering real sacrificial love to others requires so much more than I was prepared to give, and I knew this innately the first time I held a crying newborn in my arms—that the priests of my childhood hadn’t actually supplied me with meaningful tools.

I had to go deeper and lean more heavily into the sacraments I received at Mass, sacraments with more valuable and lasting effect, though the evidence of their existence is less specific—oil, wine, water, bread, a priest making a cross over my head.

Rather than store them for another day when they will testify in my absence, I carry their grace with me, testifying, I hope, not to my own merit, but to the source of my love, which I believe to be God.

I still have affection for the secular rites of life in a small community as I continue to live them with my own burgeoning family—the dark pilgrimage each morning to school and work, and the glad return home, duty done, in the evening. When I’m in the right frame of mind, they can be just as nurturing to me as any heartfelt prayer. The catechism of my faith notes, “God has bound salvation to the sacrament of Baptism, but he himself is not bound by his sacraments.”

In other words, the sacraments of our faith are real, and God has made promises regarding them, but he can still make himself known or not-known however he chooses, and if he wants the Friday night football game to be a source of grace for all who have gathered in the stadium, so be it.

I believe he’s made known to me, specifically, that there is no eternal life in my old Sterilite bins, that they contain, rather, a shrine to a rather average person, and testify to what is least remarkable in my life—minor accomplishments at the threshold of grace.

There’s an old adage that married people end up where religious sisters and priests begin their vocations, with complete detachment from worldly things. Perhaps it is sacramental grace that allows us to do voluntarily what death does for everyone involuntarily, to not just put childish things in the attic for another day, but to really dispense with them and be free.