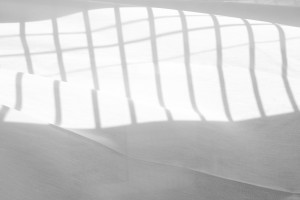 What if God turned up at your door in the form of a brush salesman? That’s the premise that Karen An-Hwei Lee’s prose-poem plays with. Mystery and comedy merge in this delightful meditation. First, an unnamed “He” does not do certain everyday things, like shampooing your carpet. Then “God” slips into the poem as the essence of love. Soon the brush salesman is speaking in tongues and the poem’s speaker is wafted heavenward. Although “without a psalmist,” the speaker utters some words of a psalm. In closing, she implores the God who is love to “brush me,” as if she were the salesman’s carpet—a final play on the wild sudden entrance of the divine into our most ordinary doings.

Meditation on the Evangelista

He does not shampoo your carpet or show you how to brush it clean.
He does not shower you with roses for Sunday’s wedding or funeral.
He does not put his hand in your hair or ask if your spouse is at home.
He only opens a book of words in two columns, one in your language.
He is the salesman with a suitcase of brushes—no gospel tracts.
No, not uncertain whether God loves you from one moment to the next—
your being is love, moves in love, as God does. Man with a case of brushes
shows up at the door. Leans on the frame, whispers a word, evangelista.
Soon he speaks in tongues, but you do not know where this utterance
will go. Upstairs to heaven or sideways, as though sleeping in holiness
on the man’s sleeved arms. You never see the sky open, a ladder of angels
ascending and descending. Instead, a book closes, and the glory-cloud
engulfs you. Without a psalmist, you say—O God, you touch my heart
with love. If I find shelter in the shadow of your wings—brush me.