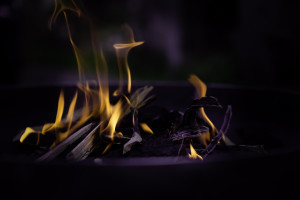 There’s a sub-genre of poetry in which the speaker’s persona is a long-ago figure or a fictional character. Here, in “Translation Back into Native Tongues,” the speaker is John of Patmos, purported author of the biblical Book of Revelation. His subject in this poem is language, languages: always a perfect subject for poetry, that prime crafting of language. I like how the speaker longs for his childhood language but also hears language in the natural world: the “keening” of Patmos’s “olive-green wind”; the remembered language of birds. He hears even Jerusalem itself as a language. I feel myself wafted through the poem’s lines evoking various languages—until suddenly in the final stanza, I’m brought to a full stop. Here is a contrast I must pause over, ponder. Why is “metaphor” for God, while humans get what seems lesser—“simile”? Might it be that metaphor is open-ended, while simile (X is like Y) offers only a single, bounded comparison?

“Translation Back into Native Tongues” by Nicholas Samaras

Sometimes, I miss the Aramaic of youth.
Then, the personal flame came over us

and we spoke to the numb nations—
until the nations winnowed and muted us,

but not breaking the spirit of our speech.
Now, I live in the breeze’s murmur,

the native tongues to which the soul responds,
a language that comforts us where we are.

Here on Patmos, the olive-green wind
is tethliménos—bereaved, keening its dialect

over the lee. Sometimes, I miss the Aramaic,
the Hebrew, the language of birds

in my father’s courtyard.
My permanent sadness and permanent joy.

There will be new countries, a clarity of experience
only when you step out of it.

A clarity of Jerusalem found only on Patmos.
It is a language of gesture and longing.

Metaphor is for God.
Simile, for the extent of humans.

Nicholas Samaras’s newest book is American Psalm, World Psalm (Ashland). The poems published here are part of a new manuscript of poems in the voices of John of Patmos and his scribe, Prochoros. He is currently completing a memoir of his childhood in nine different countries.