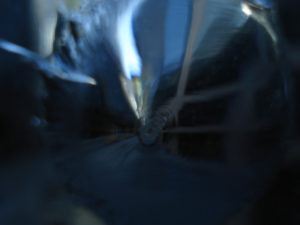 Whenever I first meet a long skinny poem, I ask myself: Why has the poet chosen these very brief lines for the poem’s shape? In Todd Davis’s “Nothing More,” the effect of these short lines is a sort of staccato: short phrases punched out in succession and often snapped by startling line breaks. Yet what fascinates me is that the content of this poem is contemplative—so a tension is set up between the poem’s shape and its substance. How perfect for a poem where the substance itself is a play of opposites: death and life, sleep and waking, “lucid dreaming.” And how intriguing that all this goes on within the genre of ars poetica: a poem about the art of poetry. Poetry, Davis writes, is “nothing more / than lucid dreaming.” Yet that “nothing more” becomes much indeed when Christ himself enters the poem as the “composer” (the poet) of a parable which the child he wakes from near-death has been dreaming.

“Nothing More” by Todd Davis

He was used to writing
poems during meetings
and student presentations,
voices droning like bees
when the azalea blooms,
or while driving his car,
trucks only inches away,
death in tow. As Graves
tells us, “To be poets
confers Death on us.”
But death to self, or
to the world, or to each
moment passing away
irretrievably, irrevocably,
like the same azalea
days later, blossoms
black with decay?
What he liked most
was writing in church
while the minister
explained why Christ
said the child had
not died but only slept.
Poetry is nothing more
than lucid dreaming:
awake enough to change
the course of things
by merely desiring it,
asleep enough to know
the pleasures of the dead.
A poem can’t say what
the girl wished for
after Christ called
to her, “Talitha kum.”
But from what poem
would anyone willingly
awake? In the room
where Christ composed,
she slept undisturbed
until his words woke her
from a dream of mustard
grown taller than any
plant, of birds roosting
in its branches, shielded
from the day’s harsh light.

Above image is by M Daines, used with permission under a Creative Commons license.