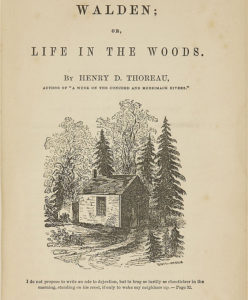 What are the classics but the noblest recorded thoughts of man? They are the only oracles which are not decayed, and there are such answers to the most modern inquiry in them as Delphi and Dodona never gave.… To read well, that is, to read true books in a true spirit, is a noble exercise…. It requires a training such as the athletes underwent, the steady intention almost of the whole life to this object.

Yes, it’s Thoreau. I’m re-reading Walden. Why? Because it’s on my bookshelf, and I’m in the process of interrogating each book there. The choice: either read it or get rid of it. I hadn’t read Walden in decades, so I pulled it from the shelf.

Though I admire Thoreau’s radical simplicity—if something isn’t a necessity, get rid of it! and my shelf-purging seems to be in Thoreau’s spirit—the book’s opening hundred pages lay it on too thickly for my taste; too much finger-wagging at people who are attached to even minimal property.

But this short chapter called “Reading”: this one is a treasure.

I delight in that opening quote calling for reading to be like athletic training. Indeed, a lifelong training, a “steady intention.” What Thoreau means isn’t that we need to be able simply to read words, read sentences. No, he means that reading “true books in a true spirit” requires a sustained act of will and sustained practice. “Books must be read,” he adds, “as deliberately and reservedly as they were written.”

Wow, that’s quite a challenge to readers. Do we take it on?

And then, what are “true” books? For Thoreau, they are the classics: first of all Homer, Aeschylus, Virgil. Something in me must agree, because I do return periodically to these writers. But later in the chapter Thoreau expands his list of “required reading” in a different direction:

That age will be rich indeed when those relics which we call Classics, and the still older and more than classic but even less known Scriptures of the nations, shall have still further accumulated, when the Vaticans shall be filled with Vedas and Zendavestas and Bibles, with Homers and Dantes and Shakespeares, and all the centuries to come shall have successively deposited their trophies in the forum of the world. By such a pile we may hope to scale heaven at last.

I’d known that, along with Emerson, Thoreau “discovered” for his American contemporaries the riches of the Eastern scriptures. But what fun to come across this final image: that these scriptures belong in the pile of trophies by which we can “scale heaven.” (I confess that I had to look up “Zendavestas”; they’re the Zoroastrian sacred texts.)

Thoreau’s list of literary trophies notably omits fiction. He seems to be unaware of—or have no interest in—the new genre of the novel that was creating a sensation on both sides of the Atlantic. When Thoreau was writing Walden in the early 1850s, Jane Austen’s novels had been published forty years previously. And even if they hadn’t yet reached Thoreau in Concord, Massachusetts, closer to home America was generating its own acclaimed fiction in Melville’s 1846 bestseller Typee, and Hawthorne’s first short story collections.

I don’t know why these works didn’t inform Walden’s chapter on reading. Yet something Thoreau says about Homer applies, for me, to the best of fiction:

No wonder that Alexander carried the Iliad with him on his expeditions in a precious casket. A written word is the choicest of relics.… It is the work of art nearest to life itself. It may be translated into every language, and not only be read but actually breathed from all human lips.

The written word in the form of the novel, I’d argue, is pre-eminently “the work of art nearest to life itself.” I agree with Nathaniel Rich, writing in “James Baldwin and the Fear of a Nation” (New York Review of Books, May 12, 2016):

“How do people come to know themselves? One way is by reading fiction. The profound act of empathy demanded by a novel, forcing the reader to suspend disbelief and embody a stranger’s skin, prompts reflection and self-questioning.”

Is this, I wonder, why I always have a novel by my bed? Often it’s Austen, whom I cycle through every few years. Or Anne Tyler. Or Dickens’s David Copperfield. Or Vikram Seth’s A Suitable Boy. (At one time Dostoevsky was there, but now I find him too dark for bedtime. “Near to life,” definitely. But to life’s darkness. I need to end my day with a glimpse of light.)

This brings me back to Thoreau’s comment that “books must be read as deliberately and reservedly as they were written.” Alas, this is not how I read at bedtime. As the day ends, I need to let the words of my novel wash over me; I need to just let them happen, reading not deliberately, but passively, appreciatively.

But during the day? Yes, then I do try to read deliberately: that is, with as much attention to the language as the writer has given. Take Walden itself, my current afternoon reading. Many of its sentences are luscious, with the rhythm and sounds of poetry.

Like this line: “By such a pile we may hope to scale heaven at last.” The hint of iambic beat. The alliteration of hope and heaven. The linked “l”s of pile… scale… last.

Such “trophies,” as Thoreau calls them, I gratefully treasure.

The above image is public domain, via Wikimedia Commons.