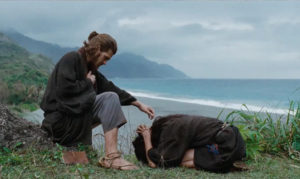 I arrived at the advanced screening for Martin Scorsese’s new film, Silence, in the worst possible frame of mind. For one thing, I was running late after seeing to some errands. Also, I was starving. My only option for getting some food in time was a fancy burger joint near the entrance to the multiplex. It was one of those places that makes your burger to order and I fidgeted at the table, waiting for my number to be announced.

I sensed the irony of chowing down before watching a story that chronicled both the extreme poverty of Japanese peasants in the seventeenth century and the torture and execution of missionary priests and converts. Then while I was waiting for my mega-burger and fries a man entered the restaurant who seemed both high and homeless. Having lived in or near big cities most of my life I was instantly on to what he was up to. He was approaching various people in an oblique way, as if to sit down beside them.

I knew that he wanted to make the diners uncomfortable and generate a sense of obligation toward him. And yet, when he asked if he could sit by me, I instantly said no in such a loud voice that I startled myself. He moved on and was soon being told by one of the cooks to leave the premises.

I scarfed my food while keep an eye on the time, squirming with guilt. Having finished the burger I ran after the man and gave him the bag containing half my French fries and tore up the escalator to the theater.

It’s well known by now that Silence is a film that Scorsese has wanted to make for nearly thirty years. The film is a close and loving adaptation of the famous novel by Shūsaku Endō, published in 1966. Based on historical facts, it tells the story of two Jesuit missionary priests, Rodrigues (Andrew Garfield) and Garupe (Adam Driver), who travel to Japan despite stories of mass persecution of the Christian population and the foreign priests who serve them. They are driven not only by missionary zeal but also by the report that one of their predecessors (and mentors), Fr. Ferreira, has, under torture, renounced his faith and taken a wife. They are tracing a path similar to Joseph Conrad’s Heart of Darkness, seeking a mysterious figure who can provide answers to the mystery of suffering in a strange land.

In the Portuguese colony of Macao they meet a drunken Japanese fisherman named Kichijiro (Yôsuke Kubozuka), who becomes their guide en route to Japan itself. Though he denies being a Christian he takes them to a village of Japanese converts, who welcome the priests with joy and relief. But it quickly becomes evident how brutal the repression of Christianity is. The very presence of the priests, who are welcomed as God’s servants and intermediaries, places the villagers in mortal danger.

Thus the stage is set—and while the film remains reverently faithful to Endō’s novel it is also very much Scorsese territory. For one thing, the ex-seminarian has long been preoccupied by the Judas figure—and not only directly, as in his earlier adaptation, The Last Temptation of Christ (1988), but in such figures as Charlie (Harvey Keitel) in Mean Streets and elsewhere.

Though he has been all too easily reviled in Western history, Judas is an inherently dramatic figure, caught between self-preservation and idealism, loyalty and betrayal. In Silence, Kichijiro fulfils the role of a ragtag Judas, a pathetic, cowardly sort who betrays Fr. Rodrigues but continues to lurk on the perimeter of the story, alternating between hiding in the isolation of abject shame and returning with fervent pleas for the sacrament of confession. Rodrigues, initially repulsed by Kichijiro, arrives at a dawn of understanding when he reflects to himself: “But Christ did not die for the good and the beautiful. It is easy enough to die for the good and the beautiful; the hard thing is to die for the miserable and corrupt….”

The virtue of both the novel and film is that they refuse to reduce an intractable, tragic conflict into a tale of either heroic martyrdom or cultural imperialism. The inquisitor Inoue (brilliantly played by Issei Ogata) is ingenious as well as cruel, but his argument that Japan is a “swamp” in which Christianity cannot take root—later echoed by Fr. Ferreira (Liam Neeson)—is contradicted by the evident faith of the peasant farmers and fishermen. In the end, he simply protests too much.

Neither is Silence merely about the heroic integrity of a man of conscience—A Man for All Seasons set in seventeenth-century Japan. Instead, it adds an entirely new and provocative layer: the mysterious and agonizing inter-relationship of the community of believers. Silence challenges the notion that Christian faith can be interpreted in an individualistic manner. What makes the choices the missionaries face so impossible is that the Japanese authorities threaten to kill the Japanese converts if they refuse to renounce their faith—or apostasize, to use the technical term.

It’s one thing to die for others. It is quite another thing when others have to die for you.

There is no doubt that Silence is fundamentally about putting the faith of Fr. Rodrigues on trial, but what the story suggests is not the meaninglessness of faith—the notion that silence betokens a non-existent or uncaring God—but a faith that is fully willing to accept that God works in and through human weakness, corruption, and need—not in spite of them.

In the end, Rodrigues learns to see the falsity of the view that has crept into his triumphalist Christianity, that “Men are born in two categories: the strong and the weak, the saints and the commonplace, the heroes and those who respect them.”

Only when Rodrigues is reduced to the same condition as Kichijiro, that of a wandering vagabond without power or status, can he begin to hear what the silence is saying to him. Only when his faith is crucified can he truly begin to believe.

So perhaps I arrived to see this film in precisely the right frame of mind: fresh from betraying one of my fellow human beings.

Martin Scorsese inhabits this story fully, not just in the script and scenery, but most especially in his camerawork. This is not an easy film to watch, but whatever your religious beliefs, it will change the way you experience the tension between solitude and solidarity.