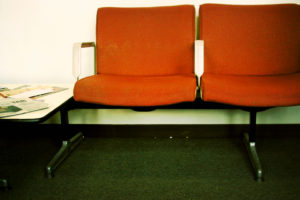 On day two we fired the harpist.

“The music is really very lovely,” the nurse had explained, as if we’d never heard a harp before. My sister and I sat facing each other in plastic chairs on either side of a hospital bed. We watched the nurse smear Vaseline on our mother’s lips. Our mother’s eyes were closed, and she continued the loud, gurgled breathing that began after she lost consciousness from her second stroke one floor below us in the emergency room.

“She’s played for several patients and the families are always so grateful. I’ll give her a call and let you know when she’s available.”

We thanked the nurse. We watched her peel off her purple latex gloves, flip open the garbage pail with one foot, and drop the gloves in the can. “No problem,” she said, and left, pulling the door closed behind her.

I turned to my sister, “No harpist.”

“No harpist,” she agreed.

The first stroke hit my mom at home. My sister had stopped by to say hello to her and noticed the right side of her face drooping. And her language was strange, although not in the usual way, not funny, but garbled.

My mom had always invented words and meaning to suit her mood and purpose, or maybe she just said and did the first thing that came to mind. Every Christmas she bought chocolates for the mailman from Diet Rite, not Rite-Aid. She turned yuppies into yappos, mammograms were mammies. And at the grocery store handfuls of taffy and wrapped caramels from the bulk bin were her free samples.

The hospital was on the other side of the Willamette River, a five-minute drive from the home my parents built forty years ago in the Oregon town where they were born and raised. After my sister convinced my mother she needed to see a doctor, my mother reapplied the orange lipstick she called coral and walked out to my sister’s car.

An hour later I talked to her on the phone from the city where I live five hours north. She was sitting up on a gurney waiting for test results.

She handed the phone back to my sister, and a few minutes later the second stroke shorted out most of the left side of her brain. We didn’t know that yet.

Her eyes opened occasionally over the next couple of days but they didn’t look anywhere, not even at me after I hung up the phone, drove down, arrived at three a.m., leaned in close to her face and practically shouted, “Hi, Mom! I’m here!”

It’s day four and I’m still doing that about every hour. A volunteer hospice helper wheeled in the comfort cart with hot coffee and leftover scones that my mom’s doctor baked and entered yesterday in the state fair. Her doctor reassured us again last night that we made the right decision. Our mother didn’t want a feeding tube, she reminds us.

We know. We agree, but what if we’re wrong and she makes a comeback and gets mad and asks us what the hell were we thinking? I’ve driven her away from this hospital before with a new prescription to fill and vases of flowers in the back seat propped up against each other so the water won’t spill.

Why can’t I save her this time, too, and deliver her back over the bridge to her home here on earth?

This morning I’m prying her eyes open and asking my sister again, “Do you think her left pupil is bigger than her right one?” (a bad sign) and, “What about those two times she moved her right leg? Didn’t that seem intentional?” (a good sign).

There’s a shift change and the Sunday nurse arrives on our floor directly from church wearing a flowered muumuu.

“Aloha! We just had the most amazing service!”

My sister seems happy to talk to someone other than me.

I don’t want this conversation to start, but it has. I’m behaving well for my unpredictable unconscious mother who chatted up store clerks and bag boys but who also pressed the Close button with the tip of her cane in the new church elevator and said to the frail Presbyterian elder and his wife as the doors shut in their wealthy faces, “Tough shit.”

The nurse closes her eyes. She hums and sways. The I.D. badge that hangs from the lanyard around her neck swings across the pink and white gardenias printed on her dress and she shifts her weight side to side, lifting and lowering her arms until they roll like waves. Together, my sister and I stand and mimic her moves, fluttering our hands as if we could scatter the clouds that have closed in around us.

I look through the window out over the hot asphalt parking lot to the cemetery where we buried my grandmother twenty years ago, where my great grandmother is buried, too.

I imagine our parents’ living room. My mom sits in her wingback swivel chair like she did a week ago. Her tan legs are crossed and she holds a glass of cold Carlo Rossi in her hand. She’s laughing and snorting as my sister and I act out this scene, making fun of the nurse, mocking death in some other sick person’s life. My mom loves it. She loves us.

“Hea i ka Haku,” the nurse croons, and we play along, making up our own words as we go.

I ask, “What does it mean?” and the nurse laughs, “Shout to the Lord!”

I shuffle between my sister and the nurse, around my mother’s bed and out of the room to look for a water fountain in the hallway. I find one near the stairs and bend down close to the stream.

I lean in, crying. I shout to the Lord.

Marlene Muller’s work has appeared in Commonweal, Cistercian Studies Quarterly, and Pontoon: An Anthology of Washington State Poets. She lives in Seattle.

The above image is by David Salafia, used with permission under a Creative Commons License.