I happened to be re-reading Uncle Tom’s Cabin when the current issue of Image (#90) arrived in the mail. So I was especially interested in Joe Milazzo’s essay on the work of African American artist Sedrick Huckaby.

In Harriet Beecher Stowe’s 1851 novel, even the kindest and most compassionate white people refer to their slaves as “articles.” The less kind whites simply assume that “n*****s” are “property.” The sale of this property is big business, and “traders” (as they call their profession) separate husbands from wives, children from parents, without any more moral awareness than you’d have in separating perennials in your garden.

Even after the Civil War and the passage of the Thirteenth, Fourteenth, and Fifteenth Amendments, the demeaning of an entire race of Americans continued. I don’t need to rehearse the various incarnations of the Klan, nor the demeaning Jim Crow laws, right up to the current mass incarceration of black men—which, again, separates fathers and brothers from their families. 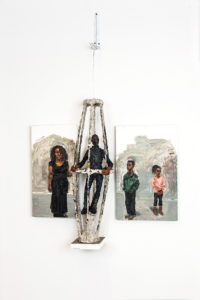 Sedrick Huckaby’s painting If Perhaps By Chance, I Find Myself Encaged… expresses this forced separation: as Milazzo notes, the encaged father in this painting is barely touched by his wife and is visually totally separated from his disturbed, puzzled-looking children. In another set of portraits, Three Forbidden F Words: Faith, Family, and Fathers, a family is separated yet again, this time each in their own frames. A daughter’s portrait is aptly titled—The Family: Halle Lujah—breaking apart any hallelujah that the separated family might want to sing.

While a paintings like Encaged or Three Forbidden F Words depict how American history up to the present has damaged black families, other of Huckaby’s paintings celebrate black cultural heritage—mainly through paintings inspired by quilts.

Huckaby grew up surrounded by quilt-making: his grandmother, mother, and aunts all made quilts, as his wife still does. My favorite of his quilt paintings reprinted in Image is From Glory to Glory, an abstract image of an intensely colorful quilt. This painting, in effect, re-joins the Halle and Lujah in an ecstatic Glory.

Viewing Huckaby’s quilt art recalled for me a visit my husband and I made in 2009 to Gee’s Bend, Alabama. We were making a self-designed Civil Rights pilgrimage during our drive home to New York after teaching a summer course in Mobile.

From Montgomery we drove the fifty-four miles to Selma. We were pleased by—yet also scornful of—the glitzy state museum halfway along the Montgomery-Selma route. The museum celebrates the Civil Rights Movement and the 1965 Selma to Montgomery march, which had been brutally repressed by state troopers only forty-four years previously.

What a turnaround: now Alabama’s civil rights history was (hypocritically, I thought) a tourist attraction.

But Gee’s Bend was a special treasure. Named for a bend in the Alabama River, the tiny town was once the cotton plantation of Joseph Gee and then Mark Pettway. After the Civil War, when Pettway’s slaves were freed, they remained on the plantation’s land, took Pettway as their last name, and created a hideaway African American community.

The black Pettway women had long created quilts—for at least six generations, it’s said. But no one outside the surrounding area knew how creatively gorgeous these quilts were until art collector William Arnett, while researching the history of African-American popular art, stumbled upon a photograph of one of the quilts. He set out to find the quilt and its maker, and his search led him to Gee’s Bend.

Astounded by the uniquely abstract imagery of the quilts he saw there, Arnett set up a foundation to bring the quilts to major museums for exhibition.

By the time George and I visited Gee’s Bend, its Quilt Collective was quite famous, and the quilts appropriately pricey. I bought two (each signed by a Pettway): one for my bed, and one to hang on the guestroom wall. (I thought of the money paid as my personal reparations.)

Still today, touching the quilt on my bed, I feel a visceral connection with these women, whose lives and ancestry are so different from mine.

I wish that Harriet Beecher Stowe could come back to life and visit the Gee’s Bend Quilt Collective. It would justify her faith that the human spirit is able to rise above attempts to crush it and that it can create beauty out of a heritage of suffering. I think she’d delightedly buy a quilt, and one of Sedrick Huckaby’s paintings, too.

The above image by Sedrick Huckaby, used with permission.