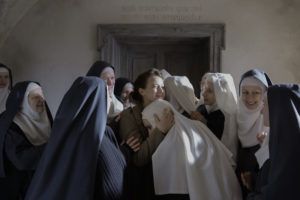 After World War II devastated eastern Europe, the Red Army pushed into the countries allotted to them as spoils, such as Poland. There, they continued the destructive work that the Nazis had begun. Among those hardest hit were the women religious of Warsaw.

French Red Cross physician Madeleine Pauliac, sent to find and repatriate the French who were still in the Polish countryside, discovered that whole convents of nuns had been gang raped by pillaging Russian soldiers. Some of the women were molested thirty to fifty times each. Unsurprisingly, a good number died in the process, and those who survived often fell pregnant. Lives of avowed purity were changed forever into lives of violent desecration.

Pauliac, who herself died in an automobile accident while still on duty in Poland, wrote of these women in her diary. That work formed the inspiration for Anne Fontaine’s 2016 film, The Innocents. The movie provides a careful, respectful, and convincing portrayal of the emotional array that comprises such a tragedy. For nuns do not stop being women when they take the veil, nor are women who have not consecrated their lives to God any less called to the courage that nuns must possess.

In the film, the Pauliac character, renamed Dr. Mathilde Beaulieu (played by Lou de Lâage) is brought to the convent by a sister who has sneaked out to the Red Cross camp. One of the nuns who has been raped by the soldiers is giving birth, and her life is in danger. Dr. Beaulieu saves both the sister and her child, but then is forbidden to return by the Mother Abbess (Agata Kuleska).

The Abbess explains that if it is learned that the nuns were raped and are now pregnant, they will be rejected by everyone—implying that their disgrace will be considered either too shameful to acknowledge, at best, or that they will be thought complicit in their own desecration, at worst. The convent will be closed and the women turned out to starve.

Dr. Beaulieu says she understands and will supply what is needed, secretly and discreetly. But the Abbess will not have it, so the physician has to threaten her: if the nun will not allow the provision of care that the sisters need, she will tell the convent’s story to her superiors. Facing that ultimatum, the Abbess concedes, but only upon one condition: that the doctor alone return to help them, and no one else.

This creates a tightrope of danger for Dr. Beaulieu, since she can only sneak away from her duties at night, and can only get to the convent by driving a Red Cross truck through dangerous territory.

As the events transpire, the doctor strikes up a friendship with the novice mistress, Sister Maria (Agata Buzek). The two women have a great deal in common. The Red Cross at the time (I am not sure how it is run now) was more of a military-type organization. There were superiors to whom you answered and duties that had to be performed. Discipline was the order of the day, and insubordination was punished by dismissal.

Of course, comparisons between convent life and military life are not uncommon either. The Abbess was the general of the motherhouse; the sisters followed the discipline that she set or risked exclusion. Dr. Beaulieu risks the wrath of her superiors for providing secret help to the sisters, and Sister Maria risks the wrath of the Abbess for the liberties she takes in ensuring that the sisters get the help they need.

The film deftly portrays the different faces of the nun’s ordeal. Some cannot stand the burden they carry, rejecting the children and running away from their fate like children themselves; some lose what faith they had; but others endure and find their way to bear both their beliefs and their children.

There are also conflicting views of providence, and the doctor learns that she is not so different from these women, and certainly no stronger. She even comes to understand what it means to risk violation in the call of duty.

In a poignant scene between the physician and the sister, Dr. Beaulieu asks if the nun is happy; despite everything, she says that she mostly is, a state that the doctor cannot truly claim for herself. She then asks how the nuns can keep their convictions considering what has befallen them.

Sister Maria answers: “At the beginning, when you are a child, everything is wonderful. Your father has your hand and you feel safe. But there comes a time—and I think it always comes—when the father let’s go—when he won’t answer when you call.”

The doctor replies that she had thought it was all supposed to be joy.

Behind all joy is the cross, replies the nun.

“Faith is twenty-four hours of doubt,” she says, “and one minute of hope.”

Amazing that faith can—and does—survive, even in such devastated places, and against such terrible odds.