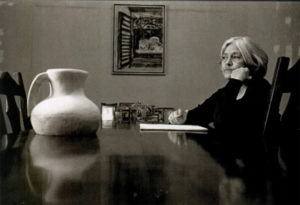 The night I met Dona Adélia, she told me my husband was the perfect man. She came to the University of Texas for a poetry reading with her longtime translator and editor, Ellen Doré Watson. At almost eighty, Dona Adélia had aged with the grace of a self-possessed movie star, Sofia Loren as a Brazilian poet. Ellen, several years younger than she, translated her words with the ease that exists between women who have been friends for decades. They were traveling together with Dona Adélia’s statuesque daughter across the United States and came to Austin to read to a packed house.

The reading was a week after my dissertation defense. Kurt, my graduate advisor, had known Ellen since they were in school and had planned the evening. Dona Adélia lingered over one of her long poems dedicated to the figure of Jonathan, who sometimes stands in for the ideal man and sometimes Jesus, and about whom she has written dozens of poems, which differ from the earthier poems about her husband, Senhor José. When she heard that my husband’s name was Jonathan, she grabbed a pen to write in a copy of her book of poetry: “With happiness, for Jonathan (the perfect man) and his kind wife, Jessica.”

Over dinner at an intimate Italian restaurant, the scent of garlic and spicy wine mingling with candle smoke, we comfortably mixed Portuguese and English. Jonathan grew up in Brazil; we lived there together for a few years before graduate school. Ellen and Kurt and other translator friends joined us. Dona Adélia leaned in, breaking garlic bread delicately over her plate, asking questions in her melodic voice. We asked her about her poems, but she waved our questions away. She wanted to hear about what it was like for Jonathan to grow up in the western part of Brazil; they discussed fishing in the Pantanal. Dona Adélia’s children are older than we; we talked about how much she loved being a grandmother. When Dona Adélia asked about our children, we paused and looked at each other.

I had two babies during my graduate school years. Though the department where I studied had been incredibly supportive in the births of my two older children, I was still hesitant to share about our third daughter. I had already been told by another professor that the fact that we were going to China to adopt a toddler with special needs meant I was clearly not serious about my scholarship. We would leave to pick up our three-year-old daughter one week after that dinner.

Kurt could not have been more different from that professor; he had supported me in speeding up my dissertation defense and loved to talk about my girls. He was an anomaly, however. I had learned over the years to talk sparingly about my children in my academic life. Even if most people were not as forthright as the professor who said I was not serious, the idea that having children took away from my focus was evident in every lifted eyebrow, every shift of the conversation away from my family.

Still, when Dona Adélia asked, we told the table about our adoption plans: how old our new daughter was, where she was from, what we knew about traveling to pick her up with our older girls along. Our food came—the thick fragrance of fresh pesto blended with seared meat. I assumed the conversation would inevitably turn, but Dona Adélia asked more questions. Kurt told a story about his three-year-old grandchild; Dona Adélia countered with a story about the antics of one of her grandchildren. Ellen told a story of her own daughter, years ago, the girl she named Adelia after her dear friend. Dona Adélia’s questions were probing, insightful—she clearly wanted to hear everything we could tell her about the adoption process and the life of children in Chinese orphanages.

In academia, I had learned to compartmentalize my life: devoted mother and believer on one side, serious scholar and skeptic on the other. Very rarely could I bring both sides of myself to any conversation. I love Prado’s work precisely because she brings the mundane into the literary world and finds holiness in things that are almost absurdly normal: the intimacy of cleaning fish in the kitchen, the sacrament of picking guava fruit. But her poetry is not sweetness and light. She describes herself as a woman “with whom God toys.” Her relationship with God is fraught—she rails against God and against Jonathan as Jesus before blessing them in the next breath. I wanted to ask her about what she felt about God, how her faith impacted her work, but she shrugged those questions away. Through various roles as an editor and graduate student over the years, I had met several well-known writers who were adept at bringing the conversation around to themselves. Dona Adélia was different. Her ability and desire to listen, to delight in everyone else, showed me better than any well-crafted answer how her faith and life blended with her art.

At the end of the evening, Dona Adélia raised her glass to us. Brazil’s brightest living poet and a table full of some of the most brilliant minds I know toasted our trip to get our girl. In her poetry and in her person, Dona Adélia demonstrates the delicate balance of a mother who is also a poet, a doubter who also believes. Her toast felt like a blessing, like a benediction.

Jessica Goudeau has a doctorate in poetry from the University of Texas. She has written for the Washington Post, Muftah, and other publications, and is currently writing a book about her decade working with refugee artisans. She blogs at jessicagoudeau.com and tweets as @jessica_goudeau.