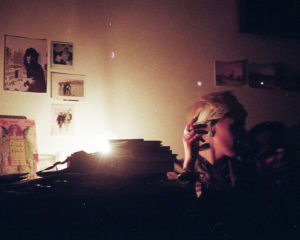 It’s fairly common for a poem to be inspired by (or be in conversation with) a famous painting. Less often, though, do we find poems engaging with a musical work. Yet that’s just what happens in Carol Davis’s poem “Grief Daybook: A Love Supreme.” Fans of the brilliant jazz saxophonist and composer John Coltrane will immediately recognize in Davis’s title the name of Coltrane’s masterpiece, “A Love Supreme.” And a line from the final movement of this work, “Psalm,” is quoted in the second stanza of Davis’s poem. For Coltrane, the “Love Supreme” is God. For Davis’s speaker, it’s less clear. The poem opens with disturbing images of bodily disintegration. Coltrane’s piece then enters the poem, offering the speaker the possibility of “another pulse in me.” Hopeful musical images continue into stanza three, with the church’s organ heard from across the street. But then, in the final stanza, musical images merge with the (apparent) loss of a loved one. “Where you’ve gone,” psalms like Coltrane’s ecstatic praise of God are abundant. Yet on the cello’s neck, “fingers [wait] / above a stalled note”: the poem’s speaker longs to connect with the lost one (“ear of my ear”), but can’t. Something is stalled; loss finally overwhelms the speaker. So the poem gives in to the grief of its title: “Grief Daybook.”

Today it’s like water in the ear, a slow bleed in the brain,
thinking of your bones
and the marrow inside them. Last night,

half-awake, I leaned into the siren as it passed
and thought of Coltrane writing his liner-note prayer
—it all has to do with it—

and listened for the drumbeat of another pulse in me.
It’s there, but I can’t hear it. In the morning
there will be blue sunlight and organ music
from the church across the street.

Carol Ann Davis’s first book, Psalm, was runner up for the 2005 Dorset Prize and will be published in October 2007 by Tupelo Press. Her poems have recently appeared in Agni, Threepenny Review, and Southern Review. The recipient of grants from the National Endowment for the Arts and the South Carolina Arts Commission, she lives in Charleston, where she directs the undergraduate creative writing program at the College of Charleston and edits Crazyhorse.

Above image by Super Awesome on flickr, edited and used with permission under a Creative Commons License.