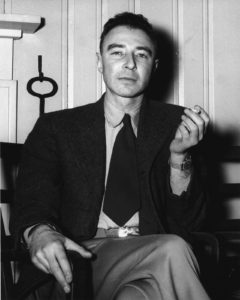 What would you think of a biography of a famous person written in the form of a poem?

I don’t mean just a portrait of the person: Stephanie Strickland did this (masterfully) in her The Red Virgin: A Poem of Simone Weil. No, I mean a full, chronological biography—birth to death and reputation beyond—complete with socio-political context and analysis of the subject’s inner life as well as his public achievements. And even more: a biography that becomes at the same time an epic poem, with its towering yet tragic central character.

All this is what Kelly Cherry has managed to do in her new book Quartet for J. Robert Oppenheimer. The subtitle is “A Poem,” though 121 distinct poems make up the book, much like chapters and subheadings in a prose biography.

The Quartet of the title refers to the four “movements” into which Cherry has divided Oppenheimer’s life: his childhood through schooling and his early professional career as physics professor (with the horrors of Nazism’s rise always in the background); his position as Scientific Director of the Manhattan Project, which developed the atomic bomb that was dropped on Hiroshima and Nagasaki; his post-war downfall, caught in the net of Senator Joe McCarthy and the country’s anti-Communist hysteria; his later life, death, and assessments of his life’s significance.

I think that Cherry calls the book a “Quartet” because Oppenheimer loved music and all the arts. He knew poetry and even wrote it; he memorized the Bhagavad Gita; his childhood home had paintings by Van Gogh, Picasso, Renoir, and more.

Oppenheimer has long been a hero of mine, as I mentioned in a recent post. So, naturally, reading Cherry’s book I was fascinated (and disturbed) to learn more about his life: his chain-smoking, his extra-marital affair, his signs of psychic illness (depression? anxiety?), his persecution as a Communist fellow-traveler during the witch-hunting 1950s.

But what about Cherry’s poetry? What sets her biography apart from prose ones? Well, she’s a brilliant poet: she knows how to use her craft to say something in a more richly condensed way than prose can do. Take these lines from “Sundays,” on the chauffeured Sunday drives with his parents and brother. (“Sundays” follows poems on Oppenheimer’s childhood as a precociously intelligent boy who still felt inadequate to his parents’ expectations.)

Their father pointed out notable details
of architecture. Ella corrected their posture,
her gloved hand no less firm for being gentle,
clouds of snow surrounding the Packard like

the sift of snow inside a paperweight,
how lightly but steadily it falls, how soon
the sky becomes invisible, the air
unbreathable, the glass globe suffocating.

I owned one of these snowy paperweights as a child. But I never pictured myself suffocating inside it: Cherry’s image for Oppenheimer’s childhood sensibility is perfect—and perfectly terrifying.

Iambic pentameter is English poetry’s most “natural” form. Yet Cherry’s choice of it was also driven, I’m sure, by her desire to write Oppenheimer’s biography as an epic. English translations of Homer and the Aeneid are usually done in iambic pentameter (though the meter of these epics’ Greek and Latin is dactylic hexameter).

From the very start, Cherry lets us know her epic intentions: she begins, as the classical epics do, with an “Invocation” to the Muse. At several points, she inserts her translation of passages of the Aeneid, using them to comment on Oppenheimer’s life at that time.

And here’s how she begins “War,” which follows poems on the Hiroshima and Nagasaki bombings:

Like Aeneas, like Achilles,
quite like the warrior-kings of old,
a leader calls together strategists
and makers of arms and bearers of arms.
Thus did Oppenheimer, not in revenge
or excess but to save civilization
from the brute mindlessness of Fascism.

Similarly, the poem “Heroes Have Flaws” begins by implicitly likening Oppenheimer to Achilles and their shared flaw of pride:

Heroes have flaws and those flaws are always fatal.
That’s how the tiny, interfering gods
do what they do—they find or make the flaws
and advertise them.

Those “tiny, interfering gods” take the form, in Oppenheimer’s life, first of colleagues jealous of his success, then Joe McCarthy and the FBI. Even after his death, the FBI still hounds him (as Cherry imagines it) in Hades, though they’re kept out of the Elysian Fields where “Robert dwells”—

and maybe he and Homer take turns reciting
the travels and travails of sly Odysseus,
the wily one. With Plato he discusses
the ideal state, its nature and its purposes.
Dammit, he said, teary-eyed, I happen
to love this country.

My general rule when getting a new book of poetry in my hands is to resist rushing it, limiting myself to a couple poems a day to meditate with. But from the first lines of Quartet for J. Robert Oppenheimer, I couldn’t put the book down. I found it gripping, a real page-turner. So I gave myself over to Kelly Cherry’s artistry and insight, and read it all in two days. I let myself be carried along by the blank verse, by the classical framing, and by the plot—by all that I was learning and reassessing about Oppenheimer.

I ended my previous post on Oppenheimer by saying he was no longer my hero, because he had said yes to creating the atomic bomb. Now, after reading Cherry’s Quartet, I understand why he said yes: because letting Hitler win the war would be the ruin of civilization. That Oppenheimer was tormented for the rest of his life by his decision, by the terrible deaths it caused, only adds—I’d say, with Cherry—to his status as hero.

Above image found via Wikimedia Commons, used with permission under a Creative Commons License.