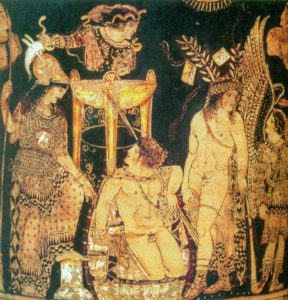 In your last letter, you asked me not to hesitate in taking a “real swing” at you, philosophically speaking. (Or were you suggesting that this tête-à-tête must inevitably culminate in the back of an alley somewhere?) I’ve been setting up the foundation for doing so over the last couple of letters. But maybe it is time to draw the threads together and take my little “swing.”

Basically, we are going to have to wrangle with Kant, which is never easy and rarely pleasant.

We have to wrangle with Kant because I think he, along with the aesthetic Modernists who came after him, dealt a kind of deathblow to the uneasy civilizational alliance between Athens and Jerusalem that we talked about in the last exchange of letters. You have characterized the conflict between Athens and Jerusalem, following Jaroslav Pelikan, as one of “synthesis,” a synthesis of “tension and complementarity.”

But simply claiming that two things fit together harmoniously does not make it so. If Athens and Jerusalem got along as well as you claim, we wouldn’t have to read quotes like the following from Cardinal (later Pope) Ratzinger (which you used in your last letter to me). Ratzinger writes:

In the Passion of Christ the Greek aesthetic that deserves admiration for its perceived contact with the Divine but which remained inexpressible for it, in Christ’s passion is not removed but overcome.

Now, I ask you, why is this sentence such a torture of syntax and grammar? What is Ratzinger trying to say here that ties him in such knots? All he’s really proving is that holding a Greek aesthetic together with a Gospel aesthetic does great damage to sentence structure (at the very least), and possibly damage to one’s mind. Come now, Greg, Ratzinger is proving my point in this sentence, not yours.

This is the game that Western Christianity has been playing with the Greeks for eons now. It is a game in which one pretends that the Greek aesthetic was simply an untimely precursor to the Gospel. This game produced much of what was great and good in Western culture for many centuries (along with much that was silly). But it couldn’t hold together forever. Nothing can, I suppose.

Now it is dead. So let’s be done with it.

Truth be told, I am somewhat surprised to see your commitment to the Ratzinger line, given your oft-expressed desire to take Modernism seriously and to appreciate contemporary art and literature on its own terms.

There is no Modernism in any meaningful sense without severing the strange alliance between Athens and Jerusalem, especially in the area of aesthetics. Kant first accomplished this severing in The Critique of Judgment. Rest assured, we do not have to go into a technical analysis of the whole of the third Critique in order to get Kant’s basic point.

Still, I now have the unenviable task of trying to provide a quick thumbnail sketch of what Kant has to say about beauty. It goes, basically, like this. The word “beauty” doesn’t actually mean anything, unless it means something. So, if by “beauty” I mean “morally good” or “erotically stimulating” or “spiritually uplifting” then I don’t really need the word “beauty.” The word (or concept) is not doing any meaningful work.

If beauty is to be a meaningful concept, then it has to designate something that can’t just be replaced by another concept. Kant’s surprising conclusion was that beauty, properly understood, is a thing of disinterest. That’s to say, we see something as beautiful when we see it not as tied to any other concept or purpose, but as an “excuse” for understanding, and the imagination to experiment without being tied to any specific rule. Beauty exists in a realm of “free play.”

The above is a gross oversimplification. But I think it gets at the essential gist of Kant’s argument. It is important for us because Kant’s argument basically collapses both poles of the Christian/Greek approach to beauty. For Kant, to call something beautiful because it is either spiritually uplifting or sensually pleasing is to have misused the concept.

Now, Kant’s argument led fairly directly to movements like “art for art’s sake” and to the extreme formalism of thinkers like Roger Fry and Clement Greenberg. You and I both, I suspect, have similar reservations about that sort of formalism, mostly because it leads to a situation where, to put it bluntly, beauty and God have nothing whatsoever to do with one another.

But I don’t think we can brush Kant aside just because we are suspicious of the formalism. Again, that’s because there is no Modernism, no space for the free play of beauty, for the development of an art that is not directly at the service of this or that moral mission, or this or that external goal, without Kant’s intervention. There’s no T.S. Eliot without Kant and there’s no Flannery O’Connor without Kant. Kant opened up that space.

Kant rewrote the rules on beauty. He redefined what we mean by “aesthetic.” Because of Kant (I’m oversimplifying here by having Kant stand in for a vast array of historical forces, but you get the point), a new form of art came into being. To understand and appreciate this art, we have to be post-Kantians. And to be post-Kantians we have to abandon the “synthesis of tension and complementarity” that Pelikan and Ratzinger don’t want to let go.

What I’m therefore trying to say is that it is impossible to agree with Ratzinger and to appreciate Modern art at the same time. They are mutually exclusive. You seem to want to have it all, a desire I can certainly appreciate. But it doesn’t work.

So what do we do? My tentative answer is that we have to learn to look for spiritual principles in art in completely new and different ways.

Above image is a Scene from the Eumenides, part of the Oresteia, by Aeschylus, painted on pottery by Python.