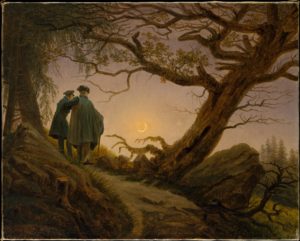 Well, yesterday you took your swing all right. I just can’t tell if you’ve decked me or…whiffed. In either case, I’m certainly dazed! I told you last time that I have no formal philosophical training, so in one sense I’m helpless to answer you in kind. If only you’d challenged me to a close reading of Finnegans Wake….

Now that you’ve played the Kant card (!), I think this offers us a good opportunity to complete this set of exchanges.

The simplest way I can summarize your argument is that you hold a “disruptive” theory of cultural history. You say that Kant destroyed any notion that Jerusalem and Athens can co-exist and, furthermore, that Kant’s subjectivist theory of beauty puts an end to any attempt to ground beauty in classical metaphysics. What we need now, you conclude, is “to look for spiritual principles in art in completely new and different ways.”

My gut reaction to this contention is the same as my reaction to new religions that claim that we’ve been completely mistaken about God or the Bible for a couple millennia and that we need to follow the brand new approach of some guru who has been vouchsafed the true, ultimate revelation.

The problem here is hubris: the notion that we must discard the past and start over is tantamount to saying that we must now create a new system of understanding virtually ex nihilo.

I’m not naïve enough to believe that all truth was discovered by point X in human history and everything since is a just narrative of decline. Even when a new philosophy challenges what I hold dear, I want to take the challenge seriously and incorporate it into a new whole. I am incorrigibly committed to synthesis. (For me, the doctrine of the Incarnation is the driving force behind every attempt to find synthesis, balance, wholeness.)

I’m willing to concede that beauty is a deeply problematic concept, one that it is easy to treat in a superficial manner. But I’m not convinced that Kant is as disruptive as you say.

For one thing, Kant didn’t merely inspire the formalism of modern art. Long before that he inspired Romanticism, as you well know. That’s because he understood that beauty causes us to enter into a contemplative frame of mind—one that is akin to religious devotion—and that it offers us a glimpse of the transcendent God. In that sense, Kant and Plato are happy bedfellows.

For another, I think you are misreading Kant’s aesthetics. As a philosophically trained friend of mine wrote to me recently, Kant’s Critique of Judgment said that there are two types of judgment: determinative and reflective. It’s worth quoting at some length what my friend said:

In reflective judgment we seek to find unknown universals for given particulars; whereas in determinative judgment, we just subsume given particulars under universals that are already known. “Socrates is human” is a determinative judgment: I place Socrates under a universal. Aesthetic judgment is reflective: we call many particular things “beautiful” and we can never determine exactly what the content of the universal category, Beauty, consists of. Yes, Kant says we can’t say “Beauty = pleasant” or “Beauty = good” because to do that would be to reduce beauty to attributes which cannot be held to be universal for all types of beauty. I could never make an argument like: “Socrates is good, therefore he is beautiful,” or “This pot is perfectly symmetrical, therefore it is beautiful.” What is beautiful is never explainable according to attributes, and so we can never determine what the universal, beauty, consists of.

As you put it, “beauty has to designate something that can’t just be replaced by another concept.”

If an absolute definition of beauty is elusive that doesn’t mean that in stalking it we can’t sense that it is a sign of the divine inhering within the created order. Kant’s theory of the “disinterestedness” of beauty has to do with how we approach beauty, what frame of mind we bring to it. As my friend put it: “Our behavior must be ‘disinterested,’ i.e., virginal, open, receptive.”

In his book, Modern Culture, Roger Scruton writes: Kant’s “Critique of Judgement situates the aesthetic experience and the religious experience side by side, and tells us that it is the first, and not the second, which is the archetype of revelation. It is aesthetic experience which reveals the sense of the world. Of course, the ‘sense’ turns out to be, for Kant, precisely what religion had assumed it to be.”

That, too, is compatible with Plato and Aquinas.

Speaking of Aquinas, you could just as easily say that it was the Angelic Doctor who helped make writers like T.S. Eliot and Flannery O’Connor possible. They rejected a moralistic concept of beauty (beauty as mere decoration around the bitter pill of truth or goodness) in large part because of the way Aquinas (and Aristotle before him) drew a crucial distinction between “making” and “doing.” Makers of beautiful objects focus on the good of the thing made, whereas the ethical individual focuses on the good of his own behavior.

Now it is entirely true that Kant discarded the classical Christian vision of metaphysics and the belief that there is an “analogy of being” between earthly and divine beauty. And that is where I cannot go along with Kant. I believe that the “analogy of being” remains a viable and vital part of our Western intellectual heritage. Thinkers like Jacques Maritain, Hans Urs von Balthasar, and Erich Przywara have done much to extend this idea into the modern era. Their work may not be definitive, but it keeps the “tension” alive.

The truth is that modern art and literature are influenced by many streams. Yes, Kant is one of those streams. But some of the more philosophically reflective artists of the modern era—Eliot and O’Connor come to mind, as does Walker Percy—were not mere disciples of Kant but actively trying to respond to him by seeking a new synthesis. In Eliot’s Four Quartets, for example, we see a Christian writer acknowledging the palpable reality of human subjectivity (hence the deeply autobiographical nature of the poem) but also pursuing ways in which his personal experience might connect in some partial fashion with the objective: history, culture, church, God.

Thanks again for opening up such a large can of worms, Morgan. Seriously. I’m definitely outclassed by your philosophical mind but I hope I’ve at least thrown a few feeble counter-punches. My challenge to you is that you proceed to forge those “spiritual principles in art” in “completely new and different ways” so that we can all benefit from them.

That way we’ll be able to take our own swings at what you come up with.

Above image by Caspar David Friedrich in the Public Domain, used with permission under a Creative Commons License.