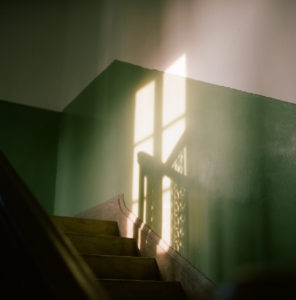 How to pray for someone bent over by grief when nature is stretching upward in the June sunshine? This is the question posed by Robert Cording’s “June Prayer.” We learn in the course of the poem that the young son of a woman “I love” has died months ago, and that she asks the poet to pray for relief from her grief. Much of this poem’s action takes place in the final words of lines whose grammar runs into the next line (in what is technically called enjambment). Take line 2’s “I know”: it sounds like the beginning of a statement of certainty until we drop into the “only” of the next line. Or line 6’s “Lord, take pity”: we expect this to be a prayer for the woman, but it turns out to be a plea for pity “on this prayer.” Or later in the poem “Lord, the sun is…” drops into “stronger,” a strength we’d pray for the woman herself. Then “all she sees” leaves us hanging, until it settles onto “the boys she must forgive each day” for simply being alive. Finally, there’s the enjambment of the poem’s closing sentence. The poet prays that the woman might be released “from her season of captivity in the dark”—which we take to be the darkness of her grief, until in the final line it becomes “the dark / belly of memory where she waits for you.” That is, for God.

Pray for me, she said, and Lord I try.
I have no eye for eternity. I know
only this world, where May’s light lengthens
into June’s long days, and someone I love
keeps discovering that grief is a season
that leads nowhere. Lord, take pity
on this prayer which is meant to be plain,
to ask no more than what has always been
asked—that she be helped to bear the weight
she cannot bear alone. But I cannot refrain
from asking something more: Why,
if she can still perfectly recall the horror
she most wants to forget, why, as the months
pass, is she already losing the feel of her son’s
touch and the exact timbre of his voice
when he joked with her? Lord, the sun is
stronger each day and the trees have filled
with birds again, but all she sees
are the boys she must forgive each day
for living, for bouncing a basketball or
carrying their mitts and bats. And she does.
She does. Can you not, then, help her lift
her head and say again—Blessed is the day—
words, perhaps, that might release her
from her season of captivity in the dark
belly of memory where she waits for you.

Above image by Nisa Yeh, used with permission under a Creative Commons License.