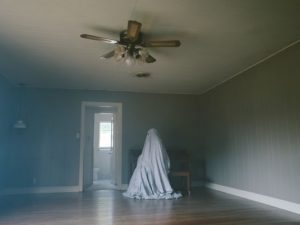 Four years ago, my wife and I moved into our red brick cottage. The living room and bedroom walls were a bright pink; the kitchen floor was green linoleum; a small yellow ball with a star rolled around, but we had no pet to play with it. It was as if we were living in someone else’s house. They left their presence behind.

In the last few months, when my wife brought up the possibility of moving on to a different house, I recoiled because in four years our house has become a place that is now difficult to leave behind. We have marked the house in cosmetic ways—by returning to the original hardwood and painting the walls. This was our way of turning a loving gaze toward the house. We grew attached to the space by not only attending to it, but also by attending to one another within the house. It was time spent in the house, yes, but it was also the quality of that time.

If it is fundamentally human to give our daily lives to projects, then our habit of projecting ourselves into the future says something about the nature of each passing moment. Our passing moments are not merely something to be mourned because they are lost; rather, they give us hope for how they might become something more.

We can’t help but realize love in spaces, in the concrete, private worlds we inhabit. While the love realized seems eternal, the spaces where it is realized in this life are temporal. In the face of this predicament, A Ghost Story has the feel of a post-Christian film in search of a future.

Midway through A Ghost Story, after widowed M has moved out of the house, and after another family has come and gone, C’s ghost observes a party. A man named “The Prognosticator” in the credits delivers a nihilistic soliloquy to the other partiers. He opines about how human beings strive to leave a legacy in various ways so as to preserve meaning and significance; yet, he reminds them, don’t forget that eventually the universe will collapse on itself and nothing will matter. In a film with so few words, the little speech stands out.

I think Lowery resists making this the film’s thesis; yet, the Prognosticator’s sentiment is the fear that besets A Ghost Story. There is a suggestion that The Prognosticator may be taking his materialism a little too seriously when C’s ghost flickers the lights at the suggestion that what we see is all there is. However, the closest thing to a jump-scare is when we cut from this scene to the house suddenly demolished by a bulldozer. The parallel seems unmistakable in its suggestiveness about the end of the cosmos.

A Ghost Story is invested in a certain sort of mystery. It seems vigilant against providing easy answers or interpretations. The mysteries here seem defined by an overriding sense of bewilderment.

I’m not sure that many specifics can be ascribed to this film’s point of view. I’m not talking about a set of abstractions that can be self-assuredly pasted to human experience with little regard for what’s there. I’m talking about a manner of perception seeking some consonance with what’s there, an embrace that is also a way forward. This film’s sense of searching is the furthest thing from indifferent, but it does often feel inevitably haphazard. It suffers the palpable loneliness of being lost.

I wonder if this is due to the film’s narrative structure. It’s not until near the film’s end that we learn M and C had a disagreement about whether to move from home. C wanted to stay in the house, he said, because of its history. We are distant from this specific conflict for most of the film. I found myself often detached from the film until this revelation.

Once C’s ghost returns to the past, time eventually fast-forwards so that his life with M recurs in front of him. I’m no Nietzsche scholar, so I can’t offer definitive judgments about how Lowery allows the idea of eternal return to structure his story. At least two things stand out, though.

First, it’s interesting that we don’t receive more joyful visions of the life that was lost between C and M until their lives recur. Second, C’s ghost has something of a revelation re-watching their life together. He is finally able to let go in a way that seems consonant with a debatable interpretation of Nietzsche’s eternal return: That it involves the practical value of examining a life.

It may be that Lowery doesn’t give us the couple’s specific conflict until the end because he wants the suddenness of C’s death to have its full effect. Perhaps he wants us to be in something of the position of C’s ghost—searching for the thing that may better enable us to let go of our lives when the time comes.

The film begins with an epigraph from Woolf’s “A Haunted House.” Whatever hour you woke there was a door shutting. We are all haunted by what we seek. In Woolf’s story, a ghostly couple haunts the home of a living couple. The ghosts seek some treasure. We discover by the end of the story that the treasure sought—that which we look long and deeply for—is the lovers’ hidden joy.

This film doesn’t look too long into what that hidden joy might entail, let alone how the experience of that joy in this life often has the quality of collapsing time so that the immanent frame becomes porous. Instead, the best we can hope for here is the satisfactory release of being able to let go.

Mortality is sure to haunt us. In the end, the remaining question—one that I’m not sure A Ghost Story explores enough—is whether our mortal end gives way to a future that is hinted at in every waking moment. We’ll continue searching, and sooner or later, we’ll see.