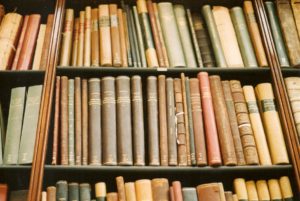 It was back in the summer of 1995 during Image’s Glen Workshop that I had the opportunity to interview Dick Wilbur for Image.

Wilbur was someone whose poetry—I am especially thinking here of poems like “Love Calls Us to the Things of This World”—I’d read in my late teens and been drawn to, especially because the poem’s clotheslines reminded me so much of the backyards of the New York tenements where I’d grown up.

Over the following years I kept coming back to his poems and his translations, especially of Molière.

By the time he was thirty Wilbur was already acknowledged as a significant force in American poetry. Twice he would win the Pulitzer for Poetry, twice the Bollingen as well as the National Book Award, and he would become the nation’s second Poet Laureate. He also served as president and chancellor of the American Academy of Arts and Letters.

Then, too, there were his brilliantly vivid and highly performative translations of Molière’s plays—among them “The Misanthrope,” “Tartuffe,” “The School for Wives,” and—when he was in his mid-seventies—“Amphitryon.” In between, he translated two of Racine’s verse tragedies: “Andromache,” in 1982, and “Phaedre,” in 1986.

He also composed many of the lyrics for Leonard Bernstein’s adaptation of Voltaire’s Candide, which saw Wilbur in the role of mediating between the enormous egos of Bernstein and Lillian Hellman. In fact, it was his royalties from the production of his plays which allowed him to retire after some thirty-five years in the classroom, first at Harvard, from 1950 to 1954, then at Wesleyan for the next twenty, and finally at Smith College for a final ten.

In addition to his extraordinary talents as a translator of poems and plays from the French and other languages—Italian, Spanish, and Russian among them—he published two volumes of prose essays and two books for children, both of which he himself illustrated.

Born in New York City, he soon moved to a farm in North Caldwell, New Jersey, where he grew up, his sole companion for years his younger brother, Lawrence, so that he spent long periods studying the things of the world around him.

His father was a gentlemanly Presbyterian, his mother a devout Episcopalian, so that he grew up in that faith tradition. Sometimes he attended Baptist Sunday school with the family gardener when his parents were away. During WWII he carried a missal with him he’d been given by a field chaplain.

He was also influenced by what he called the baroque imaginations of Milton and Borromini, as well as by the poems of Gerard Manley Hopkins. For years he was a lay reader in his local church in Cummington.

Growing up in the ’30s, he took to hoboing, twice riding freight cars across the country and seeing many of the country’s major cities from their railway yards, first alone, and later with some of his Amherst College friends. Considered a radical leftist in college, he at first opposed the U.S.’s entry into World War II, but after Pearl Harbor enlisted in the Army.

While at Amherst, he met and fell in love with Charlotte—Charlee—Ward, a student at Smith College, a sister school of Amherst, and married her right after he graduated in June 1942. The couple, who were deeply devoted to one another, had four children, all living: Ellen, Christopher, Nathan, and Aaron.

During the war, he served as a cryptographer with the Texas 36th Signal Company. When telling war stories, he once told me, “the fear, horror, and incredulity” were long gone, so that the talk was “mostly of tactics and black-comedy anecdotes.”

But he vividly remembered deciphering the message which told his division that the Benedictine monastery atop Monte Cassino “was to be bombed, and on what schedule that was to be done,” something which sickened him, at the same time that he believed it had to be done to eliminate the German forces holding the mountain.

His earliest literary influences were Frost and Crane, then later Marianne Moore, whose poems, like his, acknowledged the things of the world, however small. There were also William Carlos Williams, Elizabeth Bishop, and Francis Ponge, poets that eschewed the abstract in favor of the quiddity of things.

Then, as time went on, and he spent more and more time translating Molière and Racine’s plays, his own poems came to include more human subjects.

His poetry is filled with wit and brilliance, and holds a deep emotional core in check with its tight, restraining forms. It has been noted several times by critics that, while there is an abundance of evil in the world, his poetry reveals a deep trust in a God who sustains and informs our world as well. It was not we who made the world, Wilbur has said. Rather it is our job to discover the plentitude and majesty of creation.

He was, he once said, like Hopkins “the sort of Christian animal for whom celebration is the most important thing of all.”

Paul Mariani is Distinguished University Professor, Department of English, University of Massachusetts. His fifth book of poems, The Great Wheel, was published by W.W. Norton in 1996. He has written authoritative biographies of poets William Carlos Williams (which was nominated for the National Book Award), John Berryman, and Robert Lowell (a New York Times notable book for 1994). The Broken Tower, his biography of poet Hart Crane, was published by W.W. Norton in 1998.