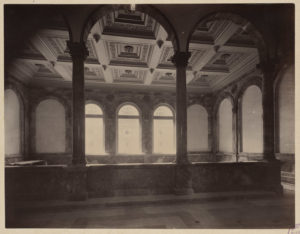 My favorite film from last year is a farce. Paul Thomas Anderson’s Phantom Thread functions like a twisted screwball comedy: Its momentum is the back-and-forth seeking of the upper hand in the relationship between Reynolds Woodcock (Daniel Day-Lewis) and Alma (Vicky Krieps).

But narrative momentum does not always move the viewer. Anderson’s films can be emotionally elusive, worlds that are beautiful to look at but difficult to enter. Or, sometimes we can get caught up in one of Anderson’s worlds, but struggle to gain our bearings inside. I was surprised to discover, then, that Phantom Thread was one of the 2017 films that most moved me.

The house that Woodcock built is luxury fashion in 1950s London. Renowned for his creative genius, Reynolds designs wedding dresses for princesses. Women approach him at restaurants, professing their desire to be buried in his dresses.

Reynolds is busy stitching a daily life that indulges life’s rich pleasures. He takes great pleasure in excellence—in beauty for beauty’s sake. He seeks refinement (no impurities). To craft such a life, Reynolds is aided by his sister, Cyril, who manages the designer’s daily schedule and operations.

Enter Alma. Her meet-cute with Reynolds occurs at a restaurant where she is a waitress. Woodcock is a recognizable brand, while Alma’s not yet made a name for herself (note that Day-Lewis is a legend on his way out and Krieps is the relative newcomer). Reynolds orders two platefuls of carefully curated breakfast. He asks her out. On the bill, she writes, “For the hungry boy.”

On their first date Reynolds’s and Alma’s banter begins without a word, when whether he will open the car door for her is momentarily in question. Back at his house, in front of the fireplace, they withhold their words for a moment until Alma asserts herself: “If you want to have a staring contest with me, you will lose.”

Reynolds has made a life out of transforming women with his carefully crafted dresses. The question is whether a woman can transform his world by crafting her own space. On their date, Reynolds answers: “I’m certain I was never meant to marry.”

Alma retorts: “You seem so certain about things.”

In the house of Woodcock Anderson delivers the viewer a sense of what it’s like to orbit a man who meticulously exerts control over the world around him.

Anderson works in close-ups and extreme close-ups that have a double effect. Many critics have described the film as sumptuous. In part, it’s because Anderson films Woodcock’s world so that we have our fill of every delectable inch, eyeing up dresses and food. This perspective mirroring Reynolds’s attuned sensibilities.

However, these close-ups also accentuate Alma’s experience insofar as Reynolds’s house is confining or suffocating; she feels routinely crowded out by his routine. Put differently: Reynolds’s house is completely airtight. For Alma, this means that she cannot be herself in his world; we viewers struggle to place ourselves (our experience), too.

After a failed attempt to love Reynolds in her own way with a surprise meal, Alma prepares something different. Here the story’s exaggeration and suspense become pronounced (spoilers ahead!). One day, Alma places poisonous mushroom shavings in his tea. Reynolds falls ill. He collapses in front of his team of dressmakers, knocking over and spoiling their finished work on the Belgian Princess’s wedding dress.

He’s humbled. Alma positions herself to be by Reynolds’s side to nurse him back to health.

During his feverish illness, Reynolds hallucinates his mother’s ghost. Alma enters the room unaware that she’s there. Reynolds recognizes Alma anew side-by-side with his mother.

When he recovers, Reynolds is ready to marry Alma. He says he loves her, something she’s already expressed. “A house that never changes is a dead house,” he says.

However, once they are married, breakfast is still a problem.

I’m not exactly sure yet what Anderson awoke within me when Alma decides to go out dancing alone on New Year’s Eve after Reynolds refuses. It began with the image of Reynolds peeking into the hall at the slammed door; Reynolds pacing before the closed door, feeling not the interruption of his work, but something else that hurts more; Reynolds turning his careful eye to the crowd at the ball, but not finding Alma at first; Reynolds finding her dancing—glowing—with others. Without him.

In these moments, achieved in part by a kind of tender urgency in Greenwood’s soundtrack, I found my eyes welling up. In this sequence Reynolds experiences something he hasn’t known except by his mother’s death: palpable absence. What had been airtight space began breathing something unexpected and sorrowful and beautiful.

To discern the thread of a story we often look to the beginning and the end. There we find Alma because this is her story. It’s a story where Anderson wonders, “What if halfway through Rebecca, Joan Fontaine said, ‘You know, I’ve had enough of your shit?’”

In the end, we learn that Alma’s hungry, too, and it’s not reducible to loving Reynolds.

Beneath the games, the power struggles, the hurts, the false self-assurance, the temporary pleasures, the warped masculinity—beneath the absurd exaggerations of Anderson’s precise plotting—is a hope: Real joy is found where we are willing to endure the pain of being changed by a loved one.