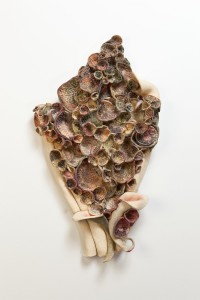 Clay, so satisfyingly yielding, reminds the viewer of the essentially tactile exercise needed to shape it. Luce, who lives and works in Charlotte, North Carolina, began as a painter, but found herself drawn to the convexities and concavities of sculpture, and the corporeality of throwing, folding, smearing, pushing, and pinching. The evidence of her working process remains stamped into each of her forms. Garden, for example, offers clay pushed flat into trowel-like petals and clay rolled into snaky tendrils. Epistle is scored and imprinted with streaks of pebbly texture and indented with doughy pockets. In both pieces the result is a luscious layering and enfolding of elements into an integral whole. After sculpting her pieces, Luce adds a final, unifying layer of color, essentially painting them together. The painted clay becomes almost like cloth—another allusion to the work of the hands. 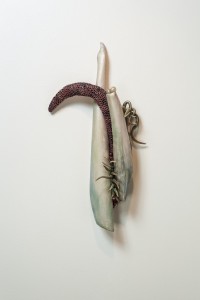 Beautiful and dense, varied and exotic, the pieces in Serpent Tree both delight and startle, like mysterious things that have washed up on shore. Throughout Primoris Ortus, tendrils lick, pods burst open, stalks wave, and stem-like forms dance. In In Plenty eroded elements are fused into a harp-shaped cacophony of hull-like pods, each with a patina of color [see Plate 10]. The piece communicates a sense of time and drift; one imagines it spawning new members, its encrusted barnacle-like forms competing for space. Even If feels wetter, moppier, its curling tongues of undulating growth swaying like parasites from a pair of aquatic plants, a stove-pipe sponge wedged between [see Plate 11]. These two pieces, with their visual references to land and sea, demonstrate the wide variety of Luce’s beautifully abstract forms.

Luce’s use of paint draws particular attention to the surfaces of her ceramic pieces. Applying color through a variety of underglazes, oxides, and paints, using brushes, sponges, and rags, she layers tonal textures in thin coats. After pieces have been bisque fired, each receives finishing stains. In this way Luce enlarges the aesthetic possibilities of the clay, wedding corporeality and expressive volume to surface treatment. For example, in Primoris Ortus, one is drawn to the shapes of peapod-covered skeletal assemblages showing off their crusty complexity; at the same time one is treated to surface tones of greens, russet, and gold [see Plate 12]. Combining clay craft with painterly expression, Luce celebrates the full visual complexity of nature, borrowing from nature’s wide range of design possibilities. 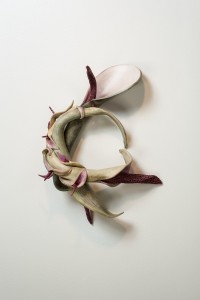 Luce was a painting major as an undergraduate, but in her senior year she began to work on forms that allowed her, in her words, to “escape the confines of the square or rectangle.” She made paintings on large strips of paper and Plexiglas, allowing the paint to define the forms. She recalls being fascinated with Lynda Benglis’s poured paintings and other sculptural paint forms. When she entered Hunter College at the City University of New York to complete her MFA, she took two ceramics classes and soon realized that she “liked to build things.” By the end of her graduate program she was working entirely in clay.

In graduate school, Luce began to study other artists who pushed the boundaries between painterly and three-dimensional expression. Living in New York exposed her to a wide range of such practices. She credits her exploration of nontraditional ceramic surface treatments to, among others, Jeffrey Mongrain [see Image Issue 58], with whom she studied at Hunter, and Lynda Benglis.

Benglis’s exploration of the interrelationship of paint and sculpture was only one facet of her influence on Luce. Benglis’s interest in the interaction of works with their environments inspired another aspect of Luce’s work: ceramic assemblages designed as installations. Between 2009 and 2013, Luce has experimented with arranging her ceramic pieces within site-specific environments, creating installations at the International Ceramic Research Center in Denmark, the Berlin Center for Ceramics, the Medalta International Artists in Residence in Medicine Hat, Alberta, and the Grünewald Guild in Leavenworth, Washington.

During her Danish residency she created a site-specific outdoor installation titled Ancient Expanse, a series of ceramic pieces created to interact with the coastline in southwestern Zealand, with works installed beneath the water, at water’s edge, and beyond. Later, Ancient Expanse was exhibited in and around a four by twenty-foot fountain at the Coastal Discovery Museum at Honey Horn on Hilton Head—a more accessible installation that allowed viewers a clear view of the colorful clay components and their interaction with the water.

Whether photographed along the Danish shoreline or installed in a fountain at Hilton Head, the effect of Ancient Expanse is one of startling contrasts. The natural and manmade elements meet, with rich and disorienting effect. As with Primoris Ortus, the abstract biotic forms both charm and unnerve, like mysterious drifting objects that have come to shore. The sheer organic display lends great warmth to Luce’s forms, whetting our sensate sweet tooth; meanwhile, their visual oddity unnerves. 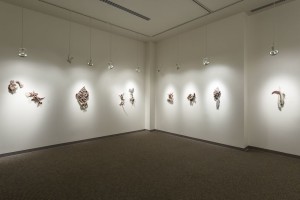 Disarming juxtapositions are a key ingredient in Luce’s work. Unglazed clay, for example, would seem to suggest humility, but Luce’s pieces are without any whiff of homespun virtue. In Primoris Ortus each piece faces the viewer from its place on the wall, gorgeously dressed and waiting at eye level [see Plate 13]. These are no patient, humble ceramics, cautiously waiting on gallery pedestals; they are painted divas, vying for attention. Each is designed much like a corsage, dressed to serve as a pin-up for conspicuous consumption. Were they made for pedestal display, like most ceramic works, we would take them in by walking around them, moving from side to side, front and back. We could turn from them. As they are, we don’t walk around them but face them, furthering the diva-like character of each: they demand nothing less than face-to-face interaction. Luce’s clay assemblages may come from the honest earth, but they wittily covey sophisticated egoism—even unhealthy self-indulgence.

Luce herself writes of the Serpent Tree series, “At first glance, the forms seem to be living and innocent, but upon closer inspection they can appear slightly sinister and suggestive.” Indeed, the viewer can feel almost like Alice in Wonderland. The visual complexity enchants us, and we take delight in Luce’s use of nature’s earthy substance to make surreal forms. Nature, a source of solace and pleasure, seems to beckon us toward reveries of land and sea. But, like Alice, we find ourselves troubled. In the tale, she met a talking mouse, a hookah-smoking caterpillar, living playing cards, and other strange figures. In Luce’s work, the viewer encounters pieces that seem familiar but are oddly disorienting and disturbing: simply put, there is something troubling about decorously painted mud. It is like encountering a twelve-year old wearing heavy makeup.

This tension is testimony to Luce’s acuity. She explores not only the ornamental possibilities of expressive ceramic modeling, in beautiful painted curves and attenuated forms, but also themes uniquely possible with her earthy medium. By stimulating the gaze with painted-up clay, she introduces a visual metaphor for the tension between proper sensual delight and corruption, between creaturely expression and fleshly values run amok. We, too, have the capacity to self-adorn or self-adore, to fashion or falsely frame. Material pleasure can properly awaken or quickly enslave us.

Plato argued that beauty, when it is true, births goodness and love. Indeed, sensual beauty can be a pathway to the sacred. Contemplatives have long made this point, arguing that beauty inspires awe and wonder, thereby invoking a holy order beyond that which the senses perceive. In so doing, beauty creates the conditions for wisdom.

At the same time, beautiful things can be unsettling, dangerous, sometimes even hollow. Superficial beauty can be used to paint over uncomfortable truth. According to the Genesis account, creatures made of clay run the risk of decadence. If, forgetting their origins, they become overrun by desire and self-indulgence, they may regress to little but dressed-up mud.

Allison Luce is able to give aesthetic form to what are essentially spiritual exercises. Her works draw us into an exploration of the sensual world and the spiritual landscape therein. The invitation throughout her work is to recognize the serpent’s lie, giving consideration to the Edenic principle that human beings thrive best when accepting limitations to indulgence.