The morning after the blitzkrieg that toppled the vaults
of Saint Michael’s Cathedral and set the rest on fire,

a stonemason found among the embers one roof
beam laid across another, a kind of crucifix

created by the forces of accident and violence
and then by grace of eyes that saw in them an order.

A puzzler of rubble and its hidden logic,
he chiseled the words Father, forgive, then lashed and raised

the crux into a monument, an abstract man,
beneath the gutted tower left unrepaired for good.

what we then would ask of him. Forgive them, Father,
say the reddened letters in the large black book

that, some claim, is God talking to God, or a man
to men, or both at once. Oh, it gets confusing,

the dust that falls for weeks over the bombed cathedral
as the search party lays its dead in the street.

Coventry, Dresden, Berlin, they know a thing or two
about confusion, the grief that makes a home a stranger,

a stranger a home in ruins you think you understand.
You do and do not, and the things that go unsaid

are tender sometimes as wounds are and certain mothers,
certain gathering storms that call their children in.

As roofs go, so go their nails, and the oldest ones
were so long and fierce, the men of Saint Michael’s

torched three into the mast-like symbol of their faith,
the vertical axis with its dagger toward the earth.

And they gave it away, shipped it across the channel.
Walk the ruins of the Kaiser Wilhelm Church,

and you see there the heavy iron nails raised up
like an anchor drawn to heaven’s invisible hull.

Call it confession or kindness, it is, and no less sharp
than all that make forgiveness possible and hard.

It is specific, as givers and receivers are.
And yes, it would raise us up in turn. And yes,

it is still a nail and so longs to be struck,
immersed, remembered. Call it the drizzle of soot,

the inconsolable cry, the widows of England
facedown in their pillows. Call it what you will,

this stake in the nation, the heart, the corpus mundi,
this gift that would be yours. The moment that you give it. 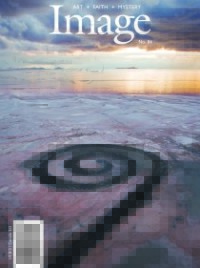