WHAT DO YOU SEE before you look?

You glimpse a stranger in a supermarket, or at church. You might spot a crowd of protestors, or a circle of old women on a stoop. It could be a face behind a windshield, or a stare from the window of a passing train.

What I’m trying to probe here are our habits of perception: what we make of the world before we ever think about it.

When faced with the lawyer’s question, “Who is my neighbor?” Jesus told a parable about recognition and its failures. What distinguished the priest and the Levite from the good Samaritan were their very different habits of perception. Already, at first glance, each saw something that engendered either aversion or compassion. What they did next reflects how they saw. “Who is my neighbor?” is not a question of jurisdiction; it’s a question of imagination. To see the person before me as an enemy or animal is a failure of imagination; to see a neighbor instead is a feat of the imagination.

Our society is grappling with a soul-sickness that is ultimately an infection of our imagination. An election may address symptoms, but how do we treat the underlying disease? How to heal the imagination? Perhaps this is what the arts are for.

The imagination is not just our capacity to invent, to project something new. Imagination is more like our feel for the world. Think of it as a faculty of perception pitched somewhere between intellect and instinct. Instinct is our biological hardwiring that determines certain kinds of responses to our environment. Intellect is our capacity for theoretical reflection. But imagination is, in fact, our default mode of navigating the world—a perceiving that is intertwined with acting, a perception that is pre-theoretical and largely unarticulated. Philosophers Martin Heidegger and Maurice Merleau-Ponty describe this as a kind of “attunement,” a fitting metaphor precisely because it holds an artistic kernel in itself: we are like instruments tuned to the world in certain ways. My feel for the world is like a song my body knows how to sing; my feel for the world is oriented by a story I carry in my bones.

However—and this is crucial—the imagination is acquired. It is learned. It is neither instinctual nor universal. We don’t all operate with the same sort of imagination. Rather, the imagination is a form of habit, a learned, bodily disposition to the world. Embodiment is integral to imagination: such attunement is absorbed on a bodily register.

And how do you teach a body? Through embodiment. This is why the formation of the imagination is fundamentally incarnate. The way to the imagination is through the body, which is why embodied, material media captivate and shape it. Philosopher Charles Taylor talks about what he calls our collective “social imaginary”: “the way ordinary people ‘imagine’ their social surroundings” before they ever think about it, the way we perceive others and our collective life in an instant. Our “take” on others. Importantly, Taylor points out that our social imaginary is “not expressed in theoretical terms, but is carried in images, stories, and legends.” In other words, the social imaginary is shaped by the ways artists show us the world: our storytellers, image-makers, and performers of all kinds enact a story about who we are.

This, of course, is also where we go wrong. Our imaginations are susceptible to malformation depending on what images we feed them, what stories they soak up. It’s the imagination—well- or malformed—that determines what I see before I look.

This is why the arts are crucial to our collective imagination. Grabbing hold of us by the senses, artworks have a unique capacity to shape our attunement, our feel for the world. The question isn’t whether the arts will shape us, but which.

At the root of so many of our social ills today is not just what people believe or profess but what they see at a glance. And that is the effect of how they’ve learned to see—their habits of perception. The way we reflexively imagine others is what truly shapes our action in the world. Of late, many people have overwhelmingly been shaped by stories that portray others as threats and competitors, even stories that fundamentally dehumanize those who differ from us. Our habits of perception have been subtly trained to imagine the other as an invader, a competitor, an adversary, which is why our default has become individualism, egoism, and self-preservation. We then make the world in our image.

This is not new. We have centuries of practice in such subtle disfiguration of the imagination. I recently returned to James Baldwin’s 1964 essay “The Uses of the Blues,” which is, sadly, both prescient and timely.

One of the distinguishing features of Baldwin’s searing prose is his remarkably generous—and what I can only call spiritual—insight into the ways white racism devours the soul of the racist. “In evading my humanity,” Baldwin says, “you have done something to your own humanity.” My imagination needs to undergo detoxification, not just for the sake of the other but because it corrodes my own soul.

Baldwin argues that the United States—“this peculiar purgatory which we call America”—is a distinct case, not because racism doesn’t exist elsewhere, but because the history of America is a history of dehumanizing fellow image-bearers in such close proximity. Unlike the British or French colonialists for whom exploitation was an abstraction on a distant shore, “[t]he American found himself in a very peculiar position because he knew that black people were people.” This proximity of the enslaved demanded imaginative acrobatics that became habits of perception for centuries. Baldwin sees “the attempt to avoid this”—the proximate fact of Black humanity—as “one of the keys to what we can call loosely the American psychology” that “created in Americans a kind of perpetual, hidden, festering, and entirely unadmitted guilt.” How to suppress that guilt? Tell yourself a story that denies what you see. To filter Didion through Baldwin: white people tell ourselves a story (about Black people) in order to live (with their reduction to chattel and ongoing repression).

Guilt is like a film projector that casts a story onto others as if this could somehow expel it from our own souls. Baldwin notes “the ways in which we manage to project onto the Negro face, because it is so visible, all of our guilts and aggressions and desires. And if you doubt this, think of the legends that surround the Negro to this day. Think, when you think of these legends, that they were not invented by Negroes, but they were invented by the white Republic. Ask yourself if Aunt Jemima or Uncle Tom ever existed anywhere and why it was necessary to invent them.” These are images, each one invoking and confirming a story that rattles around in a collective imagination, thereby shaping what many see before we look. Near the end of his life, Baldwin returned to the theme in an open letter to Archbishop Desmond Tutu. The self-destructive guilt of the so-called “civilized” world stems from this oppression and exploitation at the root of western wealth, he wrote. “From this root spring the legends concerning—proving—the inferiority of black people. One must justify the appalling action of turning a man into a thing.” That kind of justification has to bypass the intellect, because the lie can’t survive logic. Instead, the lie targets and settles into the imagination. To root this out requires a detoxification of our habits of perception.

I dream of a third Great Awakening in which our imaginations would be reborn, a sanctification of sight baptized by stories and images such that even our first glance is holy. The tents for this revival would be galleries and cinemas; we’ll sing from poems and novels; the altar call will invite us to attend plays and contemplate sculpture. 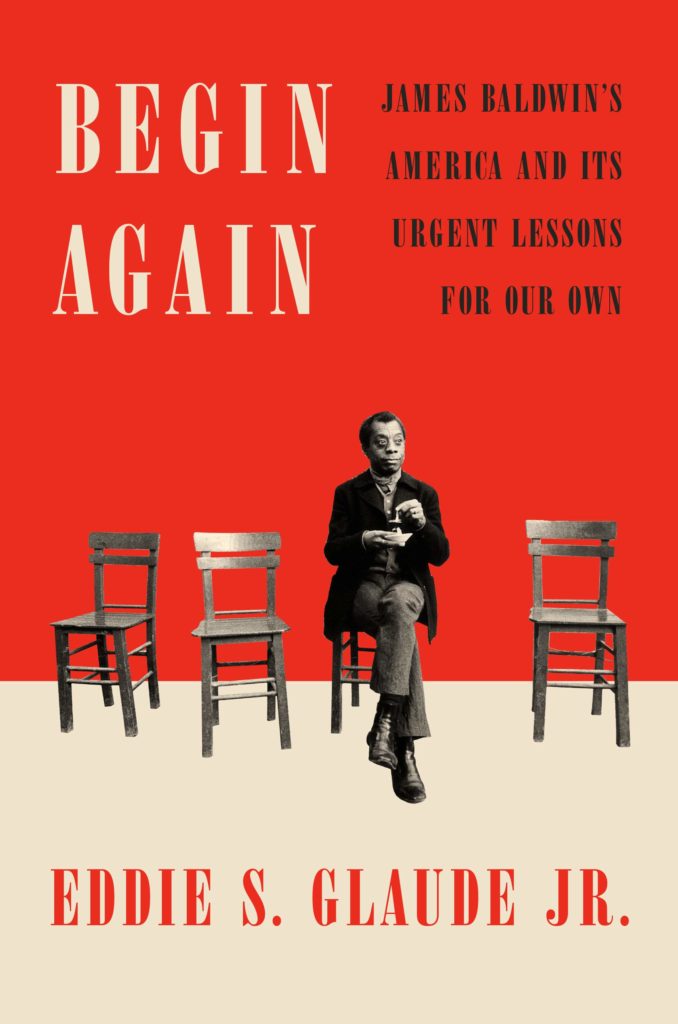 In his stellar new book, Begin Again: James Baldwin’s America and Its Urgent Lessons for our Own, Eddie Glaude locates our societal challenge at the intersection of poetry and images, not just policy and elections: “For Emerson, ‘America is a poem in our eyes’ and what was needed, required even, was a poet to bring that vision to the page. Baldwin’s vision of America was bound up with the lie that resided at the country’s core. Its images could be nightmarish.” Not just its laws; not just its policies; not just its actions; but its images.

It’s no coincidence, then, that Glaude’s book ends with visual art. Making a pilgrimage to Montgomery, Alabama, he visits the National Memorial for Peace and Justice (often called the Lynching Memorial). At a distance, Glaude first sees “a prairie full of rusted, brown coffins.” As he approaches, the floor descends, and the coffins hang above him like the “strange fruit” of which Billie Holiday somehow managed to sing. Eight hundred coffins for eight hundred counties, each inscribed with the names of Black Americans lynched by white rage and fear and hatred, playing out a story of dehumanization that had been told a thousand different ways from pulpits and over airwaves and in sitting rooms and drugstores. To see this is to be forced to look again at who “we” are.

Bryan Stevenson, the Christian attorney who founded the Equal Justice Initiative and established the memorial, understood that arguments would never suffice. The soul-sickness that generated this history was about a symbolic universe. “We’re living in a region where the landscape is littered with the iconography of the Confederacy,” Stevenson said. “When I look around and I see the iconography of the glory of enslavement and the era of lynching, I say we’re not in a very healthy place.” To change our world means telling a different story, inhabiting a different story, transforming my habits of perception to change what I see before I even look. “But this story,” Stevenson concluded, “requires a different symbolic landscape.” Arguments made in a courtroom are important; they might change minds and laws. But it is this sculpture, this memorial, that seeps down to the imagination. The soul that descends into this work of art can never see the world the same way again.