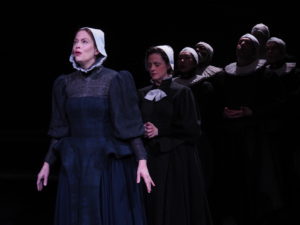 Our current issue features a profile of innovative theater director Karin Coonrod, whose projects range from Shakespeare and medieval mystery plays to adaptations of Flannery O’Connor. Her latest play, now running in New York, is an adaptation of the classic Isak Dinesen short story “Babette’s Feast” (famous for the 1987 film version), the story of a refugee who arrives in a remote Norwegian village populated by the fractious, aging adherents of an austere Protestant sect. Coonrod’s friend John Skillen, who also wrote the profile essay in issue #96, asked her about the project.

Image: Your new production of Babette’s Feast strikes me as yet another flowering of your signature elements as a director. Here’s a story whose cultural, visual, emotional, and theological ethos is Nordic and Protestant through and through. Yet without flinching you bring in another of your multiethnic ensembles, including an African American Babette. How did you understand this mix of people as opening up the text?

Karin Coonrod: The story by Isak Dinesen was originally published in English, in Ladies’ Home Journal in 1950. Rose Courtney’s script is drawn from the story itself, and when I first read it some five years ago, I was struck that it’s set in the northernmost point in Norway, a little fishing village called Berlevåg, not in Denmark, as in Gabriel Axel’s 1987 movie. I think it’s a very important choice on the part of the author. Berlevåg is a fierce landscape in the Arctic Circle, a seemingly godforsaken place. In this choice I could feel the writer’s wit. Who would ever expect a miracle in this place? For me it was like the epiphanies experienced by the desert fathers and mothers. And in my dramatic imagination it immediately translated to being set at the edge of space and time, a kind of eschatological wedding banquet.

This curiosity of a story set in northernmost Norway and written for homespun Americans was the beginning of my finding an entry point for a twenty-first-century American audience. From the first scene, we know the journey will take us through the conflict between earthly experience and the infinity of what is beyond. This, I thought, freed me from the constraints of any narrow, rigid representation of Norway and Norwegians—avoiding a timepiece or diorama of Norwegian life a century ago—and allowed, even called for, something representing the American family in all its shapes, colors, and genders. The heart of the story is unchanged, but the vehicle is one we recognize from the street, from life around us today.

I think the author would approve: Babette herself is a fictional character, after all. And I knew immediately that Babette should be played by an African American woman. A great artist incognito, she enters the play as a maid and a fugitive and leaves it as an angel of grace. It is an often-told tale: the most remarkable divas of twentieth-century America began their lives subservient and ended as household names: Billie, Mahalia, Ella, Aretha, Sarah, Nina…. We, too, are asked to acknowledge what is beyond the physical embodiment of earthly things.

I hope our audience will experience what Isak Dinesen wrote to us: an invitation that brings all mankind into the story of infinite grace. 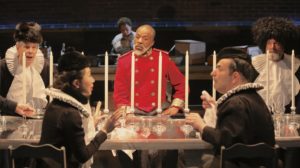 Image: Axel’s beautiful 1987 movie dramatized the story; but you kept a sense of the characters not just as protagonists but also as narrators (you did something similar with O’Connor’s “Everything that Rises Must Converge”). What led you to this approach?

KC: The fleshing out of the narration by the actors creates a company collective straight from the heart and soul of Dinesen, with all its human contradictions and opinions. Having worked rigorously with Flannery O’Connor’s short stories on stage (in some cases verbatim from the story), I have always relished this work. It is an opportunity to be in direct contact with the wit of the writer, like an aside in Shakespeare unleashed. Having the actors slide in and out of their roles and speak some of the narration requires a different suspension of disbelief. But I see the audiences quickly adapting, and the storytelling by the actors reduces the distance between them and the audience and immerses us all in a sort of collective memory of the townsfolk.

Image: Your approach to the costumes struck me as similar to that in texts&beheadings/ElizabethR: spare, monochromatic (except for Babette herself), Puritan black with simplified white neck ruffs, yet visually rich. I’d love to know what your instructions were to your costume designer Oana Botez.

KC: Well, for starters, I never give her instructions, as we are long-time collaborators. With both Oana and Chris Akerlind (who designed the set and lights) I share a language joyous to enter into.

Oana knew we were going to make an ensemble piece. The first step is always the research. In this case she brought me remarkable images from late-nineteenth-century Scandinavia, which we looked at carefully together, Oana making note of what I really responded to. We loved some of the extreme looks of ruffs and skull caps, and this catalyzed Oana. We never intended any kind of realism, but rather a stylized take on it all, since six of the nine actors would be covering many roles, sometimes shifting immediately. We talked through a color scheme of blacks, grays, and blues. Oana had the idea of having a dress for Babette made of cloth printed with an image from a Parisian painter. I loved this idea, and we eventually landed on a print by Eugène Galien-Laloue, predominantly blue with a touch of yellow. When Babette enters the scene in this dress, against the monochromatic solids of the others, it enhances her otherness.

Image: What went into your and Chris Akerlind’s decisions about staging?

KC: As for the first ideas for the world of the play, I spend a great deal of time alone in the theater space, sitting somewhere near the back of the house. I consider all the actions of the play. I make notes and drawings of the characters in their various geometries. That’s when things come to me. Chris and I both operate from a place of deep simplicity and powerful gesture. I knew that Babette should occupy the entire upstage once she arrives. In Portland, where we created the performance, the upstage wall is aged brick, and I imagined it as a hearth. When I brought this reverie to Chris Akerlind, he immediately thought there should be a long counter, nearly the length of the wall, which could roll downstage at different moments.

Image: The set is starkly simple. There is only the long, weighty table and the work counter in back. For me, it evoked a Rembrandt group portrait, a Last Supper. What led you in that direction?

KC: When considering the dinner table arrangement I made several drawings in my notebook of possibilities, including a variation on a Last Supper. What we landed on included the living and the dead around the table. Twelve are coming to dinner, but we only had seven actors, so each living actor was seated opposite an absence. The dinner table would be downstage, while Babette would be far upstage working at the kitchen counter in dim light. Yes, I did think of Rembrandt’s Supper at Emmaus, where a figure upstage is listening in. I wanted Babette present in the upstage with a growing pile of pots, boxes, pans, and bowls, with the dinner table and its attendants featured in the foreground. It was important to have twelve candlesticks representing all twelve at table, present and absent, with all the other resonances conjured up by that number.

Image: And, yes, Babette’s Feast did occur…but with no food! What led you to take this approach? Just pragmatism, or something else?

KC: The play, the story, is not really about food and the exclusivity of a fine dinner, but rather about an act of extravagant giving on the part of an urbane outsider who is an artist chef incognito, which then leads to reconciliations of the fractured community. When I thought about the table and its setting, how beautiful it was in the movie, and how we all would like to be invited to that table, it made me think about how theater does something different. We do not have close-ups in the theater. A play is an experience shared in time and space. I also thought about the elegance of the elements, not the elegance of wealth. I did not want to signal that this feast was about wealth, but rather abundance in a surprising way. The idea is fire and ice at the edge of the world: these people sit around an other-worldly splendor with food that is imagined and mimed. In this way we can catch the thoughts, the laughter, the community coming together without the anatomical distraction of the food. 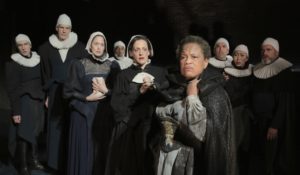 Image: A cynical viewer might suppose that it was the wine that loosened things up among this party of mainly teetotalers. What is your personal interpretation of what it was that opened the tongues and hearts of those gathered for Babette’s feast?

KC: It’s the response to an extravagant act of giving. The fugitive chef from France prepares a stunning dinner with food and wine fit for kings and queens. Inside the wonder of this gesture, the community unwittingly begins to see each other in a new way, to talk and laugh and tell stories. It is a festive time, a deep time that transcends chronology, unlike anything they have ever experienced. Only the general could really understand and articulate what was happening in his recognition that somehow the past and the future have come together in the miraculous presence of the Parisian food. I have often imagined the table, the stage, the altar as collapsed planes coinciding in purpose. Here in our production of Babette’s Feast the planes all come together, more than in anything I have ever done, except perhaps the mystery plays in Orvieto. A line in the story (left out of the play) speaks of this distended moment in festive time when the reconciliations of the fractured community occur: “Time itself had merged into eternity.”