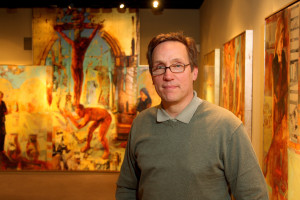 Bruce Herman is living proof that not all visual artists have a hard time with words! As a teacher, gallery director, and leading figure in the organization Christians in the Visual Arts, Herman brings an invigorating intellectual energy and articulateness to all his projects. One of our finest painters of the human figure, Herman always places his figures in a larger context of meaning—involving a profound understanding of Western history, philosophy, and culture. His paintings can be taken in at a glance with pleasure but they also repay careful attention. We at Image are delighted to announce that Bruce will be heading up the visual arts course at the 2001 Glen Workshop. For more information on the Glen Workshop, click here.

Some of Herman’s work is featured in Image issue 7 and issue 62. Read a conversation with Herman here.

Bruce Herman is Professor of Art and Chair of the Visual Arts Department at Gordon College in Wenham, Massachusetts. He recieved his Master of Fine Arts degree at Boston University where he studied under Philip Guston and James Weeks. His paintings have been exibited in seven major cities (including Boston, Los Angeles, and NewYork) and four countries outside of the United States. His work is housed in many public and private collections including the Vatican Museum of Modern Religious Art in Rome, the DeCordova Museum in Lincoln, Massachusetts, and the Armand Hammer Museum at the University of California in Los Angeles. 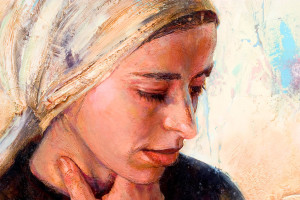 To see more of Herman’s work, visit his website. Some of his most recent paintings are featured in the collection A Broken Beauty (available from Eerdmans), and will be exhibited in Laguna Art Museum this fall. 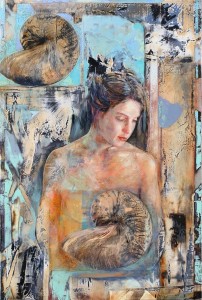 “I began a series of paintings entitled Building in Ruins about eight months after a devasting house fire (September 1997) that consumed some twenty years of my work as an artist. Of course, the phrase ‘building in ruins’ can be read both ways—using the term ‘building’ as a noun or as a verb. The neat correspondence between my personal disaster and the themes I was beginning to address in my work before the fire has helped me to focus on a fairly coherent series of new images. Let me explain.

“It’s my conviction that the whole enterprise of Western culture (or any culture for that matter) is based upon the notion of ‘building’—that is to say, making objects, making a mark in time, making meaning. The Psalmist says, ‘Unless the Lord builds the house/they labor in vain who build it.’ The fundamental human act is to build—yet the possibility of our work lasting, marking time and causing remembrance is predicated upon the idea that we mean something by what we do—and upon the genuine possibility of communicating that meaning to others. This ability to make meaning is underwritten by God—the Logos which speaks the Creation into being and undergirds all speech, all art, all building of meaning.”

“Another conviction I have come to in recent years is that the Tower of Babel story is emblematic of the human condition par excellence—i.e., that our attempts to build are fraught with all sorts of problems (and the deconstructionists have been helpful in pointing out some of those problems for us in recent decades). Simply stated, my recent work—Building in Ruins—addresses the problem of making visual meaning in a post-literate, post-GOD human universe.

“For example the painting entitled ‘Pieta’ shows a worker/building shouldering a large wooden beam which is draped with a hoisting rope that dangles somewhat limply off the end. He is quietly gazing at a partially effaced religious painting on a facing wall—(specifically a reference to Bougereaus’s ‘Pieta,’ but the fact that it is a Bougereau is less important than the fact that it is a pieta). The word ‘pieta’ is Italian for pity, or grief. The workman’s grief can be seen as both specifically religious—and in more general cultural terms a grieving over the failed enterprise of Western culture. This failure is not, to my way of thinking, a final or crippling failure—rather I see it as one of that species of failure that is related to the apparent failure of Jesus on the Cross (cf. 1 Corinthians 1:18 ff). The brokenness of the body is the fertile ground for hope—as opposed to the nostalgia that seems to show itself everywhere in our present-day culture.”