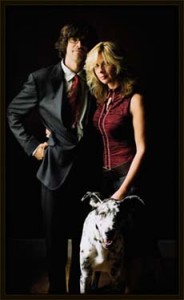 Husband and wife duo Karin Bergquist and Linford Detweiler have run the gamut of musical styles in their formidable career, from R&B to Americana and folk to jazz and cabaret. Karin’s voice offers a stunning mix of fragility and virtuosic power, and Linford’s piano is warm, meditative, and inventive. As master songwriters (they’ve released over ten albums), they command brains, sensuality, idealism, fervor, and humor, drawing on those two great wellsprings of American music: sex and religion. Their lyrics pair a vision of otherworldly hope and redemption with a rawness about doubt, desperation, and bliss. In the summer of 2008, Karin and Linford will teach songwriting their third year running at the Glen Workshop, our annual art and writing workshop in Santa Fe. Endearingly, these rock stars were also humble enough to be students at the Glen. They recently took a poetry workshop from National Book Award finalist Andrew Hudgins, whom they nicknamed “The Shredder.” Since they appreciate great writing, Karin and Linford want their fans to subscribe to Image. And we want our readers to listen to Over the Rhine. The eclectic Snow Angels includes a gorgeous new carol of reconciliation and hope, “White Horse,” the wry, steamy “North Pole Man,” and everything in between. This offer is good only with internet orders for new personal subscriptions and gift subscriptions, and is available only while supplies last.

Some of Over the Rhine’s work is featured in Image issue 30, issue 55, issue 71, and issue 75. Read an essay by Linford Detweiler here.

Over the Rhine is a band from Ohio fueled by the creative partnership of Karin Bergquist and Linford Detweiler. Recording and performing for over 15 years, Over the Rhine has toured with Bob Dylan, Cowboy Junkies and Hem among others, and recently completed an international tour which included SOLD OUT shows in Wellington, NZ, Seattle, Portland, Denver, St. Louis, Philadelphia, Atlanta and NYC. Flying largely beneath the radar of mainstream media, Over the Rhine’s music has won a loyal worldwide following which continues to grow steadily. All Music Guide describes the band’s latest release, The Trumpet Child, as follows:

“This album amounts to a shout of joy… inspired by cabaret singers from a bygone era, the desperate good-time mythology of New Orleans and a suave, decadent intelligence…”

Karin and Linford have developed a weeklong songwriting workshop at Image Journal’s Glen Workshop held every August in Santa Fe and describe themselves as lifelong fans/participants of/in the Glen. They will be returning for their 5th Glen in August of 2008.

Over the Rhine ‘s latest full-length CD release, The Trumpet Child, celebrates a dizzying cross-section of American music in the most richly imaginative ways. “We wanted to open the American Songbook wider and include influences from the pre-rock and roll era,” says Karin Bergquist. “We wanted some horns and strings and the occasional clarinet blowing through this music. We wanted the language to reflect at times the playful approach perfected by such greats as Cole Porter, Frank Loesser and the Gershwins.” Over the Rhine has also made available nationally their brand new full-length Christmas CD called, Snow Angels. “It took us 10 years to write the songs on this project. This is our 2nd full-length Christmas recording, so we’re on track to release one every decade,” explains Linford Detweiler. “People love Christmas music, but many of us are burnt out on typical holiday fare. We wanted Snow Angels to be full of original compositions rich with the conflicted emotions most of us feel during the holidays as well as a record rife with subversive spiritual implications.” Linford Detweiler recently contributed a short essay to the Image forum, Why Believe In God?, and an autobiographical essay published in Paste Magazine which traces the roots of The Trumpet Child back to his earliest childhood memories.