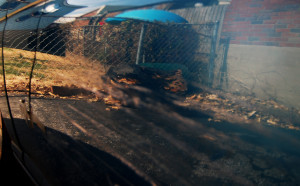 Here is a poem that silently enacts a conversion.  The poem starts off with a string of scornful terms for the speaker’s new neighbors, culminating in the almost mean pun on their child’s “grin” as “grim.” But right after this, the speaker begins to soften her terms: she notices a “warmth” in this noisy, dirty, low-class family. Then by the start of the fourth stanza, a switch in point of view has occurred: the speaker sees herself through their eyes. So when the poem’s title image enters (in the inner-rhymed “racket grackles”), the poet intentionally leaves ambiguous whether it’s the speaker or the previously demeaned family who are the bullying grackles. Whoever they are becomes irrelevant, though, in the poem’s closing lines, which focus on the birds themselves. As the sunlight strikes them, the speaker’s previously negative terms for them turn glowingly positive: “they’ve got the spectrum’s full iridescent gleam.” The poem is ultimately suggesting here that whomever or whatever we demean will—when seen in a new light— shine with this richly full gleam.

The Grackles by Betsy Sholl

Down the block, our new neighbors, not unlike
the old, could be named the Grackles, given
the way everything they have is loud: cars,
children, stereos, parties. It all spills out
into the street—broken bikes, pizza boxes,
a nasty looking dog with nothing to restrain it

but the owner’s curse. Giving the mutt wide berth,
stepping around a rusty bike rim, I glance
at the weary-looking man, the angry woman,
sullen teen, younger girl with a smudged grin.
Grim, it seems. But there’s a warmth here, too,
the father teaching his son to make the car

loud by tweaking something on the exhaust,
as the mother spit-washes the baby’s face,
laughs through smoke and sunken eyes
at her barefoot daughter’s new skip rope trick.
When the son grabs the dog’s collar—sorry
the stupid pooch frightened me—I watch him

slowly size up my jog-reddened face,
amused disdain on his for the type I am,
flitting around the block in ragged sweats
as if life’s a matter of tips from slick
magazines. Such a racket grackles make,
like castanets, scolding the song birds

they’ve chased up into the trees, giving them
flack for not even trying to bully back. Now
the sun flashes on them its brightest beam,
so it’s clear from light’s point of view,
however drab they may look in the shade
they’ve got the spectrum’s full iridescent gleam.