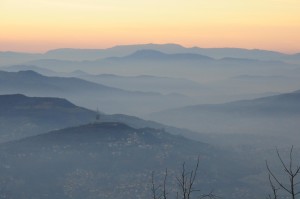 My fellowship liaison, Sevko, drove, and his gaze flicked across teenagers spilling over the sidewalks. The center of town spread within the cradle of the mountains, lit by the pink and blue haze of underground clubs. Gray office and apartment buildings faced the street, many of them gashed open, levels of exposed brick and wood open to view.

I was in Sarajevo as part of a month-long fellowship to study environmental policy. I’d grown uncomfortable with the lack of humanism in environmental debates in the U.S., and I wanted love of people and love of nature in the same breath.

Sevko interrupted my sleepy trance occasionally to point at something outside. Looking at the shadows carved under my eyes, my unwashed ponytail, he asked, “You know about purple light?” I turned to stare out the window, and he said, “No. Purple light around head. Everything is going to be okay.”

On my second day in the city, Sevko took our group of fellows to Herzegovina for a quiet afternoon away from meetings in the capital. We climbed to the south until snow and spills of rock faded beneath us and we were in Medjugorje.

Sevko led us to the foot of Crnica and announced, “We’re climbing a mountain today!” When we looked skeptical and tired, he circled his hands around his head in a halo. “Imagine purple light around head.”

When we reached a leveled-off portion of Crnica where we could stand, Sevko waited until we regained our breath and explained that in the 1980s, five teenagers playing on Crnica saw a vision of the Virgin Mary, whom they described later as being not much older than themselves. The vision warned them that war was coming and pleaded for peace between men and peace between God and men.

Sevko’s friend, Edisa, standing behind us, shielded her mouth from the statue of Mary and muttered, “Anyone who was paying attention to anything knew war was coming.”

Sevko looked broken-hearted and said, “Why can’t it be real? What’s wrong with having stories if they help bring people together?”

The children on Crnica were playing, hopping from rock to rock, watching the light wane and feeling the air cool. And then they saw something. Or they decided that it would be really cool if they saw something. Or they felt the shadow of war filling their parents and brushing nervously against their skin, and they came up with something to give the town a little hope, a part in a greater destiny.

The truth of the story might have to do with salvation, a beautiful place in nature where the world begged to be protected.

As we rested, a young man carrying a guitar on his back finished the climb on his knees, his pants rolled up around his thighs. He sat on a boulder near the statue of Mary and wept, head in hands squeezed between his bleeding knees. I wondered if he cried because this was a place designated for the sacred, the manifestation of a form of God, in a country covered with shrapnel scars that people called rosebuds.

I wondered if he cried because of what those teenagers did or did not hear, that wish for peace between men and men, that plea for peace between God and men, and the realization that here, next to these trees and funny-looking rocks, it was so easy to believe in such a request.

I stayed in a hotel room in the city’s center for the duration of my fellowship there, from which I could hear the recording of the muezzin a block away. When I needed time outside away from my studies, I walked to the mosque’s large, walled courtyard.

Think onion domes and tall minarets and green calligraphy on white walls and wide courtyards with gardens. The mosque was shelled during the siege of Sarajevo, and damaged areas were rebuilt in 1996 and 2000. Water from a hot spring poured out of one courtyard wall, and passersby trapped it in their cupped palms to bring it to their mouths for a drink.

Kind women wrapped silky green fabric around my head to match my bright coat and let me walk around and look at the trees. I could see why God might live everywhere if you were paying attention, in a place where trees and water and people continued to praise fragile flesh and the earth’s power to overrule the worst atrocities with a stubborn continuance of creation.

On our last night in the city, Sevko and Edisa took our group to a restaurant built on a mountain ledge. We faced the windows, gazing down into the lights of Sarajevo and growing drowsy with brandy and meat, while Sevko told us about the purple light around our heads.

When he converted to Hinduism after the war, his teacher said that any time he encountered horror, he must imagine purple light around his head. Sevko did this for a month, responding to the physical and emotional scars of his city with an imaginary halo. At the end of the month, his teacher told him, “Look at how much energy you spent imagining purple light around your head. Imagine if you devoted all that energy to helping people heal, envisioning the world as a kinder place.”

I thought of this conversation in the weeks ahead, holding in my mind the shelled houses of God, massive structures covered in domes and calligraphy, and soft open places blanketed by pine needles and broken ram’s horns, always quiet places where something like peace was a vision away.

Image above is by Lazhar Neftien, licensed by Creative Commons.