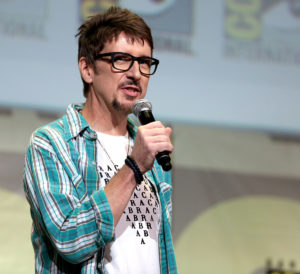 Scott Derrickson is a director whose films include The Exorcism of Emily Rose, Sinister, and Deliver Us From Evil. His most recent film, Marvel’s Doctor Strange, is in theaters now. I had the chance to chat with Scott for Christianity Today in the summer of 2014, when news had just broke that he was Marvel’s choice. In this conversation, he was even more generous with his time and as engaging in conversation as I found him to be two years ago. Scott will direct the Film Seminar at Image’s Glen Workshop in Santa Fe this summer.

Nick Olson: It seems like your film makes itself strange not only on its own terms, but strange when compared to the rest of the Marvel film universe. One obvious distinction is that this film is overtly interested in immaterial reality, but I was wondering if there is more you might say about how your film is able to distinguish itself from the rest?

Scott Derrickson: Marvel knew that I was a person of faith. I’m not a philosophical materialist. I was outspoken about that when I met with them. At the same time, I have zero interest in pitting science against faith, as I believe those two things are compatible. I even brought in a scientist to see how progressive scientific ideas could open up imaginative avenues in the movie. While not at all a challenge against science, the film is certainly a challenge against scientism.

In that respect it’s a movie made from a certain point of view. When watching it, you can accept that spiritual view as somewhat reflective of the real world, or you can accept it as purely fictional entertainment. I wasn’t interested in trying to visualize what the spiritual world may actually be like, or trying to represent any kind of real world magical practices. I was only interested in what could be imagined based on the preexisting mythology of the comics.

My interest in the spiritual planes of existence within the movie was rooted in the practical human effects of belief, which, in my experience, is that faith can help propagate growth in the face of trauma. And so I’m very interested in the relationship between trauma, understanding, belief, and growth. That is what I brought to the table because it’s the whole of my life experience. But it is also all right there in the comics. These things are not taken as seriously in the comics as I took them in the movie, but they do come from the source material.

What I love about Marvel is they are not looking at other movies trying to emulate previous successes or looking at other studios and what’s trendy. They look at their own comics as something that has withstood the test of time in terms of popularity. They weren’t afraid of the spirituality within the story. They wanted Doctor Strange to be Doctor Strange.

N.O.: After seeing the film, I noted that there was something fundamentally religious about it in an anthropological sense. And I’m beginning to wonder how much of this is attributable to the simple premise of Strange’s damaged hands. He is a surgeon and so his hands are fundamental to the image he has of himself. This story begins with the loss of his hands, and thus with the loss of the tools he uses to make something of himself.

For all of the mysticism and portals and ancient texts in this film, I found myself returning to this as marking something fundamentally spiritual or transcendent or religious. And I’m wondering if you might say a bit about this tension between the materiality of something like human hands and yet the loss of them as that which opens up possibilities?

S.D.: Yes, for Doctor Strange what matters is his scarred hands—which is an iconic religious image. But more specifically, his broken hands are the image of his identity loss. I’ve gone through the experience of having my identity shattered and what I believed was my livelihood shattered. And it’s quite a thing to find yourself unable to continue forward, identifying yourself the way you did in the past and being forced to redefine yourself. That becomes an inherently spiritual endeavor. At least it was for me.

I think in Stephen Strange’s case it was absolutely necessary because his identity was wrapped up entirely in a materialistic perspective. And the loss of the material use of his hands put an end to his value system, which was materialistic to use two different terms. I love that. I think that trauma does that. It dislodges you and forces you to redefine yourself, to reckon with things you otherwise wouldn’t.

In my observation of the world, there are two paths. One of them leads you toward becoming worse and one toward you becoming better. To become worse is to run to false comforts like physical substances—food, alcohol, drugs—or a pale imitation of some other identity that can replace your old one. Those are all trips backwards: receding, deteriorating, the antithesis of growth.

The other option is to move forward and see if there is more to life than status and occupation and income and that’s what happens to Strange. He has to ultimately reevaluate all of that. And he is able to because he has good teachers and finds himself in a community that tells him that even when his hands were working just fine, he didn’t get it. He was coming from the wrong place entirely. Without significant loss he couldn’t have seen that.

N.O.: It seems that in order to become Doctor Strange, Stephen Strange has to become a question unto himself. When the Ancient One spectacularly made Stephen Strange strange to himself, I thought, “Wow, this sure seems like the Scott Derrickson version of Malick’s creation sequence!”

Mystery doesn’t seem reducible to ignorance here. When we talk about mystery we often reduce it to something like a puzzle with missing pieces. In this film, does strangeness have a quality of awe about it?

S.D.: Yeah, there’s very little mystery in the movie experience in the classic sense of trying to put pieces of a puzzle together. Trying to solve the singular question. Those kinds of mysteries are very typical in cinema history. Thrillers are always based on solving the mystery.

The truth is that we live in a world where what we don’t know greatly outweighs what we do know. And if you understand that, and accept it, the world becomes a magical place.

Above image by Gage Skidmore, used with permission via Wikimedia Commons.