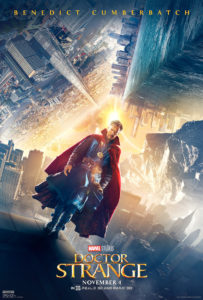 Scott Derrickson is the director of several films, including The Exorcism of Emily Rose, Sinister, and Deliver Us From Evil. His most recent film, Marvel’s Doctor Strange, is in theaters now. I had the chance to chat with Scott for Christianity Today in the summer of 2014, when news had just broke that he was Marvel’s choice. In this conversation, he was even more generous with his time and engaging in conversation as I found him to be two years ago. Scott will direct the Film Seminar at Image’s Glen Workshop in Santa Fe this summer.

Nick Olson: You said recently that, for you, creation is motivated more by discovery than self-expression. What were the memorable discoveries in the making of Doctor Strange?

Scott Derrickson: I discovered more than I could ever put into words in a single interview. Both specific things about my personal life and my relationships and ideological things. The movie certainly took a turn into moral questions that I wasn’t anticipating. Pretty quickly, I ran into some big fundamental questions about the nature of moral structure itself.

I studied philosophy as an undergraduate student and so I’ve always been interested in moral questions. Also, I identify myself as Christian, even though that means different things to different people. But the idea of morality not being as fixed as we think it is ended up becoming more significant as we worked on the script while shooting and during post-production.

I like the fact that the movie presents certain moral conundrums for which there are no easy answers because that’s how it often goes in life, and sometimes the only answer is to choose the lesser evil or choose what seems to be the best possible choice at the best possible time, even though it goes against conventional morality or what feels like universal moral law.

It’s a very dangerous business to be forced into those exceptions, but I think Doctor Strange ended up exploring a bit of what that’s like.

N.O.: I became especially invested in this film when it became clear that, in a certain sense, it was principally concerned with death. And I had this intuition, maybe based on your previous films, that when you’ve said in other interviews that Doctor Strange is distinctly your vision, that this preoccupation with death was a significant part of that distinction.

Is that true? And if so, how has death stimulated your reflection or your imagination over the years?

S.D.: I think that was one of the principle discoveries, going back to your last question. In the first draft the Ancient One didn’t even die. I became increasingly aware of the fact that I was making something that demanded death be addressed directly.

When you talk spirituality and death, it seems like it always comes around to questions of an afterlife. But I’m not focused on that creatively or personally. I’m not religious because I want to go to heaven when I die. I believe an afterlife exists but I don’t pretend to know much about it.

The relationship between death and time rose to the surface while working on the movie. Strange has this encounter with death, and from that point on, he is running up against an antagonist in Kaecilius who is obsessed with idea of not dying—of eternal existence without death.

The death of the Ancient One became a critical scene. There was probably more effort put into the dialogue of that scene than any other scene. Before this movie I wouldn’t have said death is what gives life meaning, because in the Christian tradition death is evil and it’s a curse. On the one hand, as a Christian who believes the Apostles’ Creed, I don’t deny that. But I also know that putting a clock on our lives gives us limited time—limited time to grow, to learn, to explore.

I think about my own death every single day. I want to. I don’t want to forget. That there’s a clock ticking on my life, that the days I have are numbered, so I have to do something worthwhile with them. It also forces anyone who thinks about it to recognize that one’s own life is a story that is going to have an end. And that gets you thinking about what story you want your life to tell.

All of that became a powerful idea at the center of the movie. Religious zealots who are obsessed with eternal life are gravely mistaken. I think it was a rebellion against that idea—whether a Muslim suicide bomber thinking he’s going to get reward in heaven, or Christians who deny themselves and other people the freedoms and joys and growth of this life in anticipation of a life to come.

This movie is about the other side of that I suppose. About recognizing there’s a danger to thinking eternally. Maybe living with death in view is the path to the richest life.

S.D.: I think so. It’s a sensory experience unlike reading. With a book, you’re looking at a physical page with words but in the material world all books look the same. I can open up The Brothers Karamazov, and I could open up a romance novel, and the pages and the black letters are all going to look very similar. When you go into the mind’s eye, only then do they become vastly different experiences.

But cinema is a material experience. It’s sight and sound. Something about that immersive quality brings the whole person, not just into the narrative, but into a moment-by-moment experience in a way no other medium can. Music comes the closest but that’s only sound. Cinema is something like dreaming, I think. It’s something like a waking dream.

You’re engaging the whole person, including the spiritual, and I think the finest filmmakers tap into that dreamlike state. For me it’s probably Ingmar Bergman and David Lynch who told non-narrative stories that most affected me spiritually by using sight and sound to create a kind of altered state. I don’t know how to explain it except those directors—Tarkovsky, too!—they understood how cinema can do things that no other medium does.

I’m just beginning to learn how that works. I’ve been able to make enough movies where I’m starting to understand that better, and I’m very interested in it because I think the future of cinema will take us farther in that direction. Unfortunately, so much of big event cinema aims merely to distract the audience with so much sound and fury that it successfully takes you out of the normal world state, but doesn’t give you anything in its place.

The trick is to give the moviegoer the immersive escape but also take them into a place that when it’s over they have something to take home with them. Not in a didactic way, but experientially. The greatest movies always leave you changed for the experience, and you have a hard time shaking them because you were so immersed in a kind of dream world.

I know that’s all very esoteric, but it’s true. I recently had that experience with Moonlight. The way that it was structured and told—I couldn’t shake the feeling of that movie for five or six hours afterward, and I kept playing scenes over in my head for days.

If I were to reduce it down to ideas of compassion and tolerance and fatherhood and friendship, I would be missing what makes it great cinema. The movie gave me an empathetic experience that was somebody else’s experience, and I was inside it. And I was shaken by it. And in the most beautiful, wonderful way. The greatest movies do that.