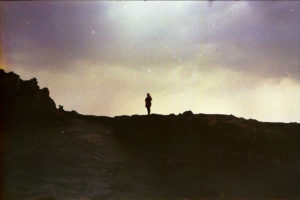 Still Pilgrim. Just the title of Angela Alaimo O’Donnell’s new poetry collection makes you pause. Pun and paradox reverberate through the title terms. A pilgrim is someone on a journey…a spiritual journey. “Still” can mean unmoving, motionless (definitely not journeying). But, further, “still” can mean ongoing, as in “I’m still doing that.”

These contradictory concepts lie at the heart of Still Pilgrim. And there’s more fluidity, too: the persona in the poems is often the poet herself, but can also merge into a cosmic figure or into all of us as readers. We are all on pilgrimage; that’s what life is.

Another dimension of these poems’ fluidity is their relation to formal structure. They are sonnets, but loosely so; few follow the sonnet form strictly. Rather, lines slip out of iambic pentameter, often having four beats instead of five; rhyming can slip into and out of the sonnet’s two traditional rhyme schemes.

To me, it’s as if the sonnet structure hovers behind the poems as the background “stillness” (unmoving structure) while the poems play with it on their pilgrimage.

Take one of my favorite poems in the book, “The Still Pilgrim’s Thoughts upon Rising”:

Blessed sleep and the long call of light.
The morning a mercy of birds.
Returned from the black hole of being,
she finds all as she left it last night.
The chairs askew, the table crumbs,
the dishes stacked up in the sink.
Yesterday’s dress tossed across the bed.
It’s enough to make her think

of how the world just waits for us
attending to its nightly song,
of how we breathe in time with it
of how we bear the miracle
and find ourselves where we belong.

I love the unexpected movement from table crumbs to the miracle of belonging.

“Belonging” is a motif in the book. Again, this is paradoxical: a pilgrim is on a journey, but this pilgrim also often expresses a strong sense of belonging in whatever place the moment finds her. “Belong” is in fact the final word of the book’s penultimate poem, “The Still Pilgrim’s Refrain,” which ends:

Again I sing my pilgrim song.
Again I am where I belong.

Borne along by fire and flood,
by wind that tongues and grooves,
our bodies brimmed with blood
that feeds us as it proves
perfection is no steady state.
It’s on the way and always late.

There’s profundity in this final couplet. Like the Pilgrim herself, “perfection” is always on the move. It’s coming toward us, into us; yet it’s never quite there when we desire it.

Similarly, in “The Still Pilgrim Revisits the British Museum for the First Time in Twenty Years,” which draws from Keats’s “Ode on a Grecian Urn” for its epigraph, the final couplet is:

The poem endures, though Keats is dust.
All remains unchanged but us.

Here, again, the Pilgrim is pondering the interplay of stability and change that is the very texture—I’d even say the deep structure—of our lives.

Writing a whole book of poems with a single protagonist is a challenge, but I imagine it’s a stimulating, even delightful challenge for the poet. I’ve written about two others, most recently Kelly Cherry’s Quartet for J. Robert Oppenheimer, a biography in verse. Closer to O’Donnell’s Still Pilgrim is the imaginary character of the “Invisible Stenographer” created by Kathleen Wakefield in a long section of her new book Grip, Give and Sway. Both these invented women have their feet on the ground while their beings course through time and space.

An extra dimension to the challenge that O’Donnell set herself is the structure of her entire book. Each poem has fourteen lines; each of the four sections of the book has fourteen poems; and each section represents one of the four seasons and also follows the liturgical year. For me, this formal structure holds in place (holds “still”) the wonderful wildness of many of the individual poems.

There’s the cosmic wildness of “The Still Pilgrim Invents Dawn,” where the protagonist carries the sun up “the Mountain of God,” “hold[ing] him in her wind-chapped hands,” and finally “heaves him high against the sky / where he gilds the field gold.”

There’s the wild fun of “The Still Pilgrim Welcomes Pentecost,” where all of creation is speaking in tongues, each element and creature jabbering in its own language:

Squirrels spit verses on the garden wall,
mice cry from the basement, forsaking
their silent places…

Doorbells chime, metal railings ring,
a tune in each creature and every thing.

And there’s the wild inventiveness of “The Still Pilgrim Recreates Creation,” which takes place in the Pilgrim’s kitchen:

I’ll call this volcano, she said
as the pot bubbled up, thick and red
sauce spewed and spat all over
the pristine stove.…
She poached fresh pears in thick merlot.
She had six days, no place to go,
in which to make this tasty world,
invent foods she didn’t know,
seat her children (a boy and a girl)
at the table, the first feast.
The whole earth smelled of bread, rising yeast.

Moving in one sentence from her children at the table to the whole earth smelling of rising yeast: this is typical of the Pilgrim’s “progress” throughout the book. It’s a movement that makes me stop and muse: how am I—how are all of us—connected in our daily doings to the hugeness of the world and the mystery of God?

Above image by super awesome, used with permission under a Creative Commons License.