Image issue #98 includes poems by critic, activist, and biblical scholar Alicia Ostriker, winner of the Jewish National Book Award and many others. She has said, “Composing an essay, a review or a piece of literary criticism, I know more or less what I am doing and what I want to say. When I write a poem, I am crawling into the dark. Or else I am an aperture. Something needs to be put into language, and it chooses me.”

We asked her a few questions about the poems in this issue.

Image: One of your new poems is an extended riff on the difference between narrative and lyric poetry. For lyric poetry you set a very high bar. Do you have to coax yourself into setting out to write a lyric poem, or are you just naturally self-confident?

Alicia Ostriker: I’m intrigued that you feel I have set a high bar for lyric poetry in “Reading Dan Beachy-Quick.” Dan’s semi-mystical style of writing, grounded as it is in a feel for space and place, is what triggered this poem.

Poetry, we all know, though we don’t think about it, exists in time, not space. A poem travels through time. But what can one say about the relation of a poem to time that hasn’t been said in all the prosody handbooks? Iambic and trochaic, all the rest of it; poets need to get the cadences, pauses, syncopations, quickenings and decelerations just right.

But I thought there was more to say.

The impulse to define the relation of poetry to time in general is something I had to think through as I was writing it. In a narrative poem you are traveling constantly forward, or maybe backward or sideways, maybe meandering, but always ongoing.

In a lyric poem obviously you also are moving forward in time (unless it’s a one-line poem). But the lyric poem wants to give you the illusion that you are temporarily outside of time; time has paused for you.

This would mean that you were in Eternity—a Blakean idea.

Pushing myself to clarify the distinction, I found myself drawn to spatial imagery. I don’t think I prefer lyric poetry to narrative poetry, or the reverse. But narrative poetry is all about the spurting forth, the rushing or meandering downhill, downhill, until you reach ocean.

Here is how Swinburne put it:

That no life lives for ever;
That dead men rise up never;
That even the weariest river
Winds somewhere safe to sea.

Or it “sinks / downward to darkness on extended wings” in an eternal evening. Still, it can be tentative and vulnerable. It’s also impulsive. Here, my poem found itself using that old theme of children’s stories, the door that leads to the other world.

In a cherished fantasy of my own, the afterlife is something like a huge boundless party:

I stumble into a sunlit lawn-party section of it, in which are congregated all the writers, poets, artists, actors, etc., in their little groups, having cocktails. I’m going to try to tiptoe inconspicuously toward where H.D. and Virginia Woolf are chatting with a group of friends. They may ignore me. But I have to try. I want to be in that number. The grass there is so feverishly and calmly green and stretches for acres and acres.

Writing a poem dominated by the lyric impulse is always a mysterious process for me. I don’t know what the poem will do line by line and word by word. When I’m on the narrative axis, I have much more sense that the stories pre-exist in a kind of warehouse, a kind of Home Depot of stories, and I’m shopping.

In any case, I liked bringing the two modes back together at poem’s end, to point out that poetry, any poetry, “speaks its mind.”

I did not answer my question about the relation of poetry to time in general. We really don’t know how to talk about time at all.

Image: Another of your poems draws on an image of Moses from the Zohar, the primary book of the Kabbalah. Jewish mysticism has been a running thread in much of your work, especially images of light. Could you talk a little bit about your interest in that?

A.O.: Kabbalah has interested me since I began wrestling with Jewish texts back in the mid-1980s, but I know very little about it.

Most of the Jewish texts I engage with are biblical, and are compelling enough to support a lifetime of interpretation and play. Literature in English is spotted and streaked with phrases from the King James translation of the Bible.

The Zohar—literally “Book of Light” or “Book of Radiance”—is far less influential, far less known. It is a vast multidimensional tapestry of voices imaginatively based in biblical texts. It needs to be approached through devotional meditation rather than analysis, and I have barely touched a toe in that stream.

But the central Zoharic idea—“as the above, so the below,” that everything in the earthly realm has its correspondence in the supernal realm—appeals to me.

The trigger of my poem “Zohar” was a lecture at the Academy for Jewish Religion, where my friend Jill Hammer teaches, which used this idea to play with the image of a Moses who is a double being, both above and below.

Image: In several of your poems you allude to the idea that we exist in a special spiritual state before we are born, in some other place where we have clearer access to the divine.

Meanwhile, other poems of yours, especially in your most recent collection, Waiting for the Light, feel very rooted in certain places, cites in particular. Are you conscious of a tension between earthiness and mysticism in your own writing?

A.O.: The earthy, material world, the invisible, spiritual world—is it a tension, or is it a complementarity? Is the body the soul’s prison, or the soul’s garment?

These are all metaphors, but the idea that we are in some sense essentially spiritual beings, who have fallen into a fleshly body and yearn to return to our undifferentiated spiritual state, is not exactly new. It’s in Plato, as well as Christianity and Buddhism and Hinduism.

According to one Jewish legend, we all possess infinite knowledge before we are born, and at birth an angel taps the area between our upper lip and our nose, creating a slight dent there, and causing us to forget everything.

The version of this myth given to us by Wordsworth in his great ode “Intimations of Immortality” is well-known:

Our birth is but a sleep and a forgetting:
The Soul that rises with us, our life’s Star,
Hath had elsewhere its setting,
And cometh from afar:
Not in entire forgetfulness,
And not in utter nakedness,
But trailing clouds of glory do we come
From God, who is our home…

Wordsworth goes on to say that “heaven lies about us in our infancy,” but that the “visionary gleam” diminishes as we grow up and start caring about things of this world, and ultimately “fades into the light of common day.”

The assumption that our material world and the world of the spirit are necessarily divided underlies Wordsworth’s ode and is of a piece with the dualism inherent to most western thought.

In some strands of Judaism that boundary is a bit more porous; “as above, so below” makes the realms mirror images of each other, and the concentration of Jewish household rituals on food and mealtime carries the implication that everything in our everyday world is potentially holy.

Sparks of divinity may exist within all matter.

I’ve written about the debate in my essay on the Song of Songs in my book For the Love of God: The Bible as an Open Book. For me, the divine is always present, and it is only our ability to access it that is lacking.

There is yearning, but not opposition. I like to think that my poetry is at home in the world, and at home with the yearning, too.

Image: Your collection, The Old Woman, the Tulip, and the Dog is written in the voices of those characters. Did spending time inside the mind of a plant and an animal change your relationship to the natural world?

This was a surprise, however. I was delighted with their humor, but I’d never written anything like that before and thought I never would again. Then, a couple of years later, the three of them began showing up again, and made it clear to me that they wanted to be a book.

I soon got a sense of their personalities, and could (metaphorically?) listen for what they would say. Usually, though not always, the old woman would come out with some utterance, some opinion, and the tulip and dog would respond.

Yet I don’t think my relation to dogs and flowers changed very much. Any of us who have had pets naturally try to read their minds, and I’ll bet many gardeners read the minds of their flowers—only they would be embarrassed to admit it, perhaps.

A gardener friend of mine used to sing to his flowers and tell them jokes. He was quite confident that they enjoyed the jokes. 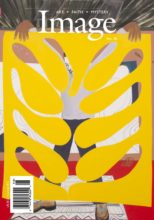