What does time do for an artist whose primary goal is simply to make a better painting?

Combining portraiture and narrative painting has driven my work from the beginning. In college I drew all night, using friends as models; I preferred drawing people I knew to the anonymous nudes we drew in class. I had desires. I had ideas. But I left school during the height of modern painting, in 1966, and I had no confidence in my own artistic ambitions.

The modern painters wanted their figures to be universal, as opposed to specific people, often with distorted features, and posed in non-traditional ways. Their brushes were large, the marks bravely original, the space ambivalent. From them I learned how to put together a whole image, every part talking to every other part, the shapes and colors varied but harmonious, with no dead spaces. As Georgia O’Keeffe put it, the goal was to “fill a space in a beautiful way.” But the content of modern painting left me cold. 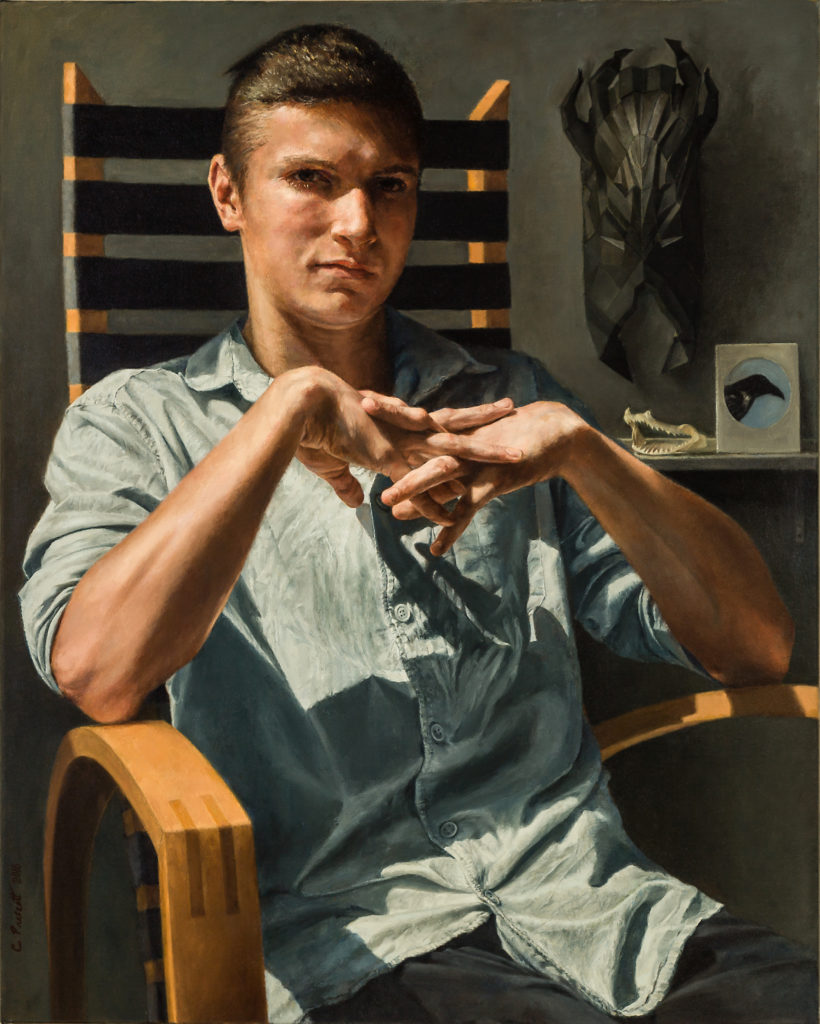 Ten years after leaving school, I began painting seriously. I found that I needed to leave the modern prescriptions behind and break the habits of my hand. I started with small paintings of tiny wildflowers. The skills for rendering detail came along, but I wanted to make portraits that went deeper than likenesses. I needed to make the presence of a person convincing; and I needed to make everything else in the rectangle support a feeling that the subject’s exterior and interior are connected.

As a John Updike character says, “Precision is where passion begins.” But I didn’t know how to be precise. I went to museums and looked at books. The Spanish and Dutch baroque painters became my main teachers, and I learned to slow way down. I worked on Sam with Miraak for four years.

In person, Sam’s interiority is private but strongly visible. You see him watching and thinking. He collects found objects and makes things, like the handcrafted paper mask of a video game character named Miraak. He writes: “I like his mask and its ominous feeling. Masks can be a very powerful thing. Everyone, in a sense, has a mask.”

What has changed in me since turning thirty is a result of my Christian conversion. What I wanted as a painter was always there, but when I met God, he told me, You can paint anything you want.

Once when I was talking with a student, trying to teach her how to make choices in her work, she said, “You mean what I want is good enough?” I hesitated, because it was a teachable moment, but in the end I just nodded. Resolve and devotion were what made better paintings.