FOOD stores on the East Side of Buffalo share a visual vocabulary with those in highly segregated low-income neighborhoods around the country. Their façades often include grated windows, peeling vinyl siding, and shattered signage. Stenciled advertisements for pink and blue sugary beverages abound. Patched sidewalks and parking lots lead up to these stores, grass rising through fissures in the asphalt and concrete. Whether bodegas, corner stores, or giant dollar stores, these establishments could hardly be called groceries. They stock meager selections of predominantly packaged goods of high cost and low quality. 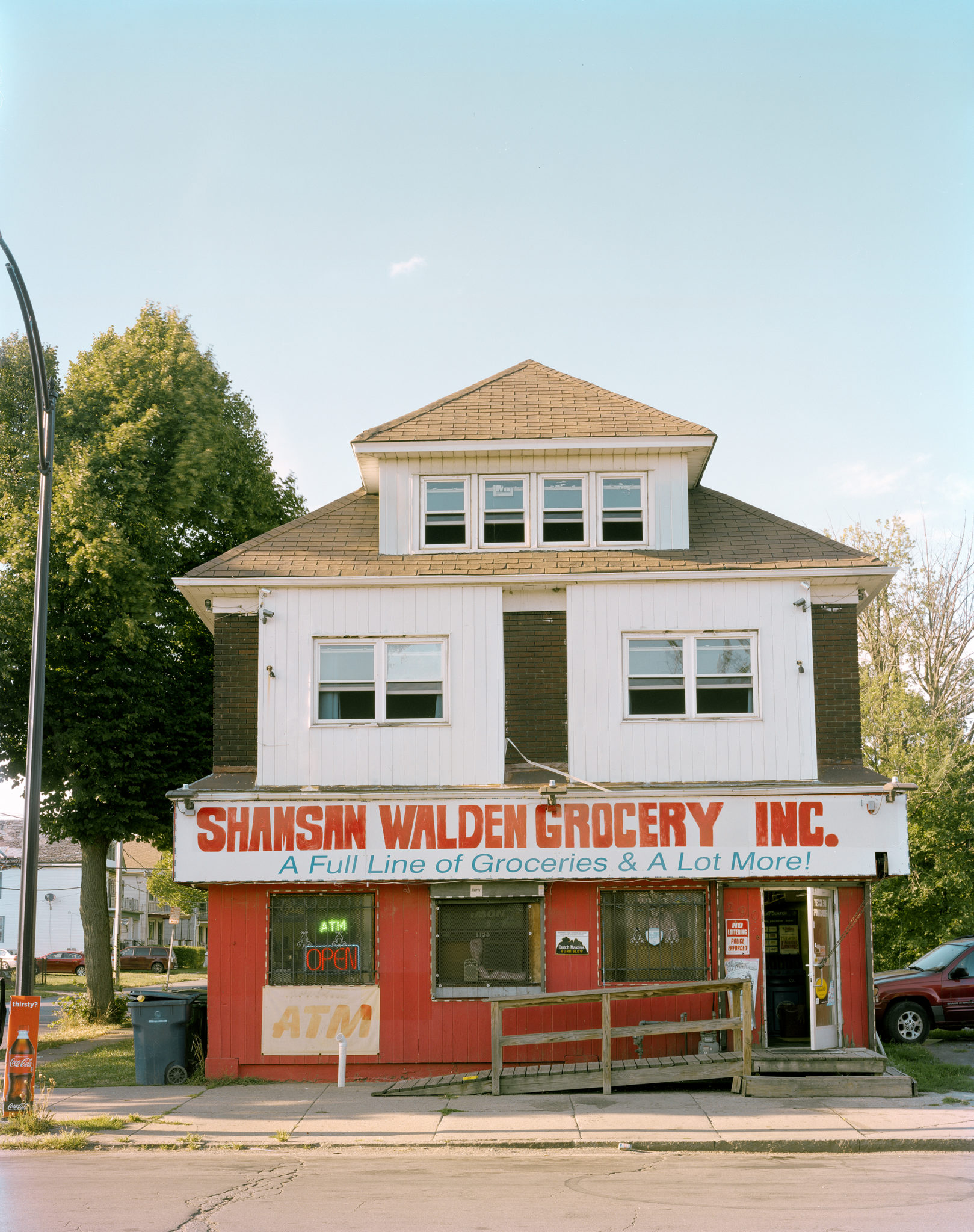 In our collaborative exhibit Redlining Buffalo, through photographs of these storefronts as well as oral testimonies, we sought to shed light on everyday experiences of environmental racism and social injustice. In east Buffalo, proper grocery stores are few. They are often reachable only by long bus rides along indirect, sparsely serviced routes. For most needs, the stores we photographed provide an unsatisfactory stopgap. As national and regional chains and local cooperatives bring a cornucopia of healthful foods to many American consumers, where are the better options for these vulnerable neighborhoods? on the East Side of Buffalo share a visual vocabulary with those in highly segregated low-income neighborhoods around the country. Their façades often include grated windows, peeling vinyl siding, and shattered signage. Stenciled advertisements for pink and blue sugary beverages abound. Patched sidewalks and parking lots lead up to these stores, grass rising through fissures in the asphalt and concrete. Whether bodegas, corner stores, or giant dollar stores, these establishments could hardly be called groceries. They stock meager selections of predominantly packaged goods of high cost and low quality. 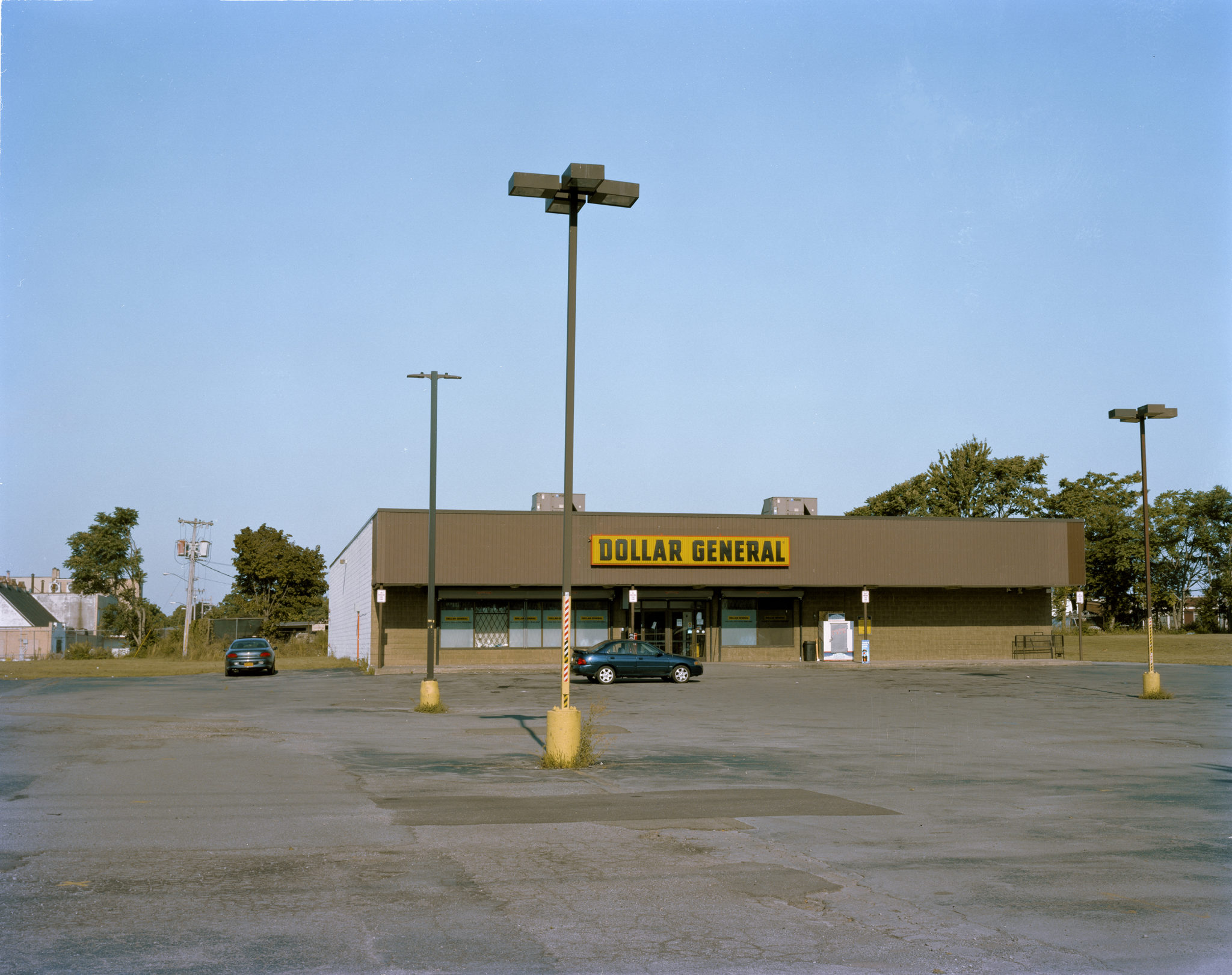 During the pandemic, the disparate health conditions affecting American communities were made painfully visible. As we developed this project, we felt it was important to address the cycles and systems that create these disparities by looking at the structures where food is acquired. We hope these images pose questions not only about physical sustenance but also about the provisions we make as a society for the health and dignity of communities—a pressing moral and spiritual concern. 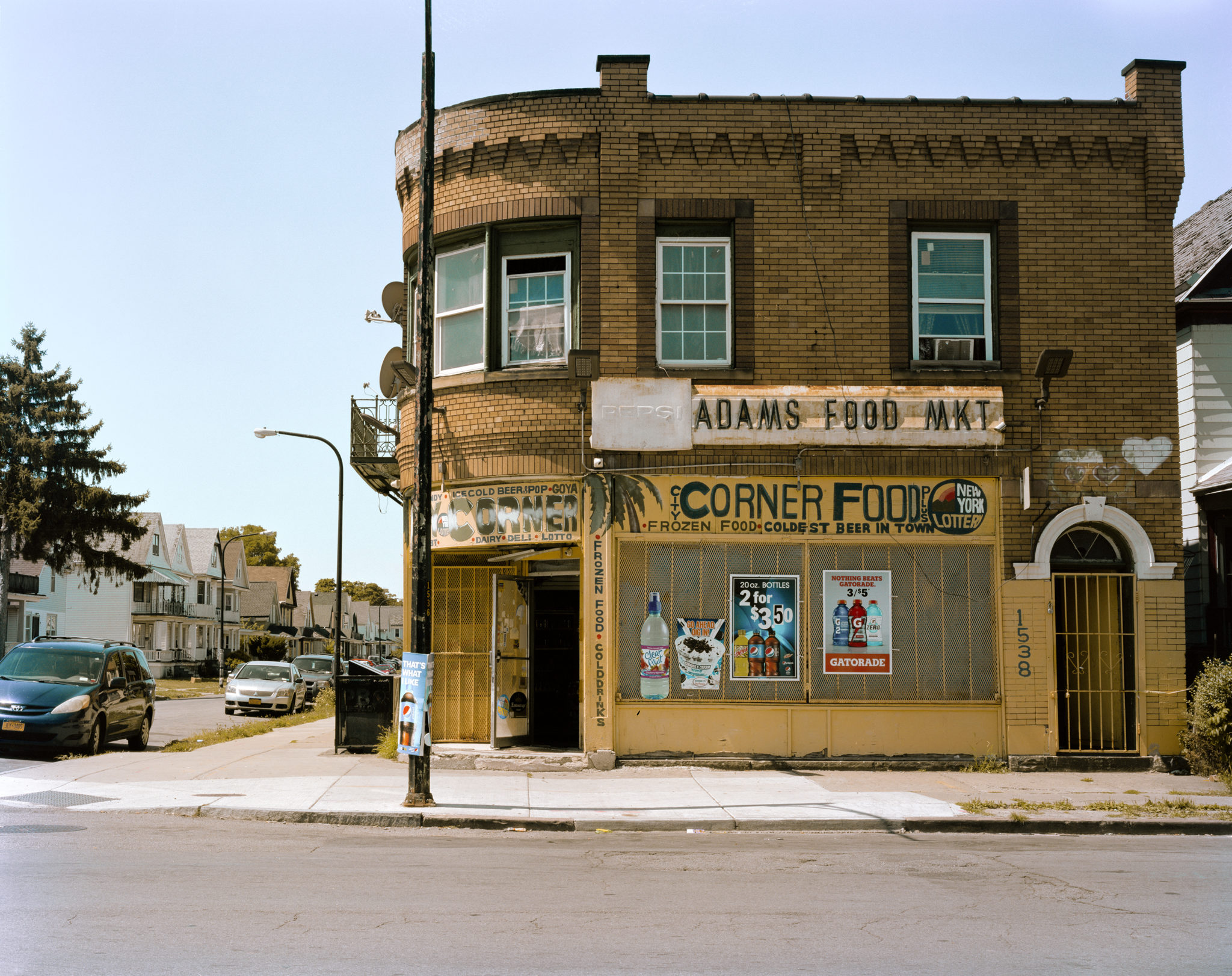 We get the crap… If you get white people over here, then they’ll start making the produce look worthy… It shouldn’t be like that. This is our city… We care just as much about our kids, just as much as the white people out there in Williamsville, Amherst, and other surrounding areas… Why can’t our kids see the same things? 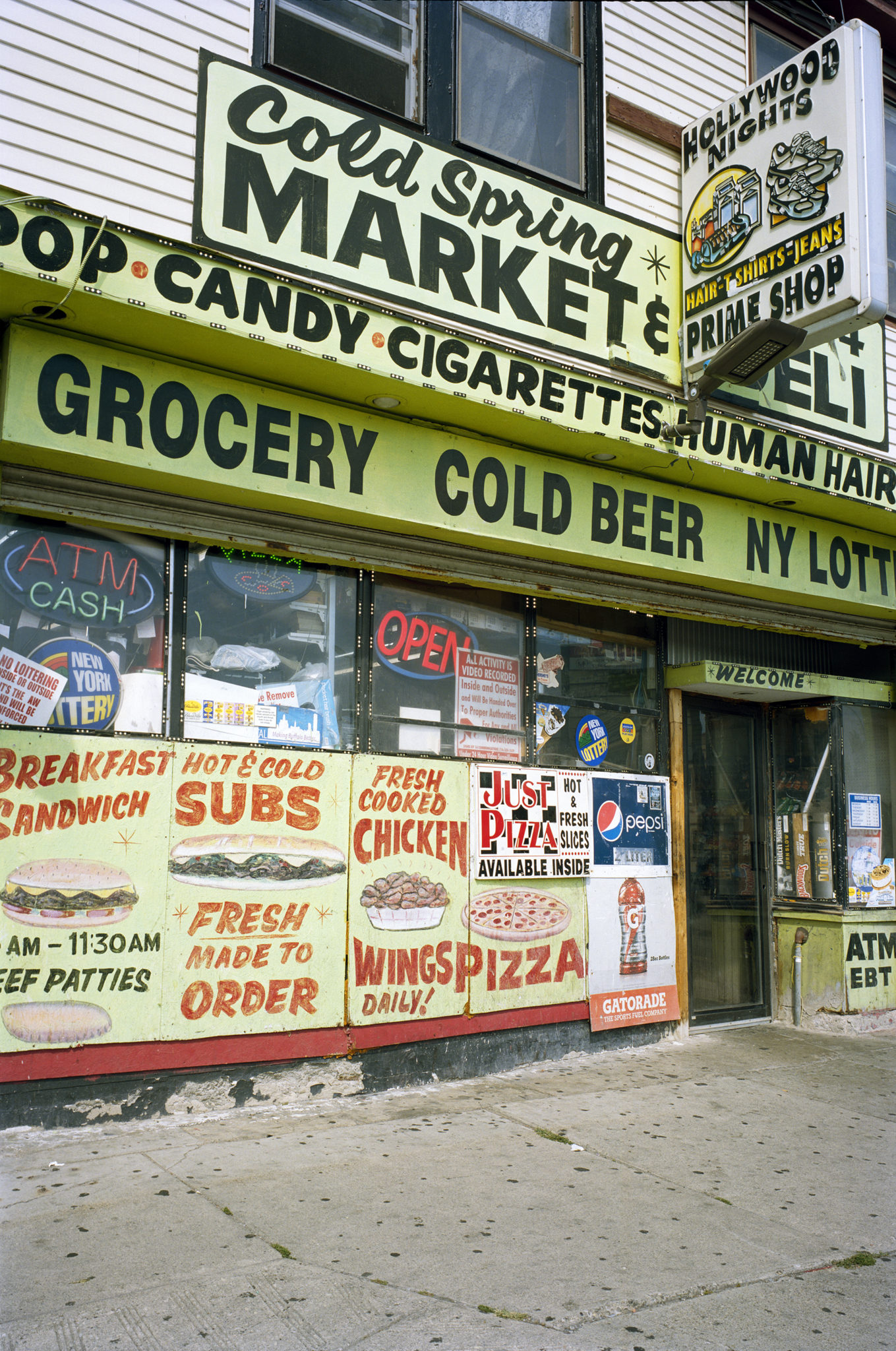 Through our practice as visual artists working primarily in photography, we explore the systemic dimensions that underpin our geographies. Our photographs envision our social and spiritual selves as two sides of the same coin. This tradition of considering the social landscape as a form of meditation extends to Eugène Atget, August Sander, Seidou Keïta, Bernd and Hilla Becher, and Dawoud Bey, artists who address the intersection of histories and individual stories through accumulation and formal repetition. Such protracted looking at surfaces reveals patterns that demand our moral reckoning. We locate our ethics in the encounter with the faces and façades around us, resulting in photographs that might be considered a relational cartography. 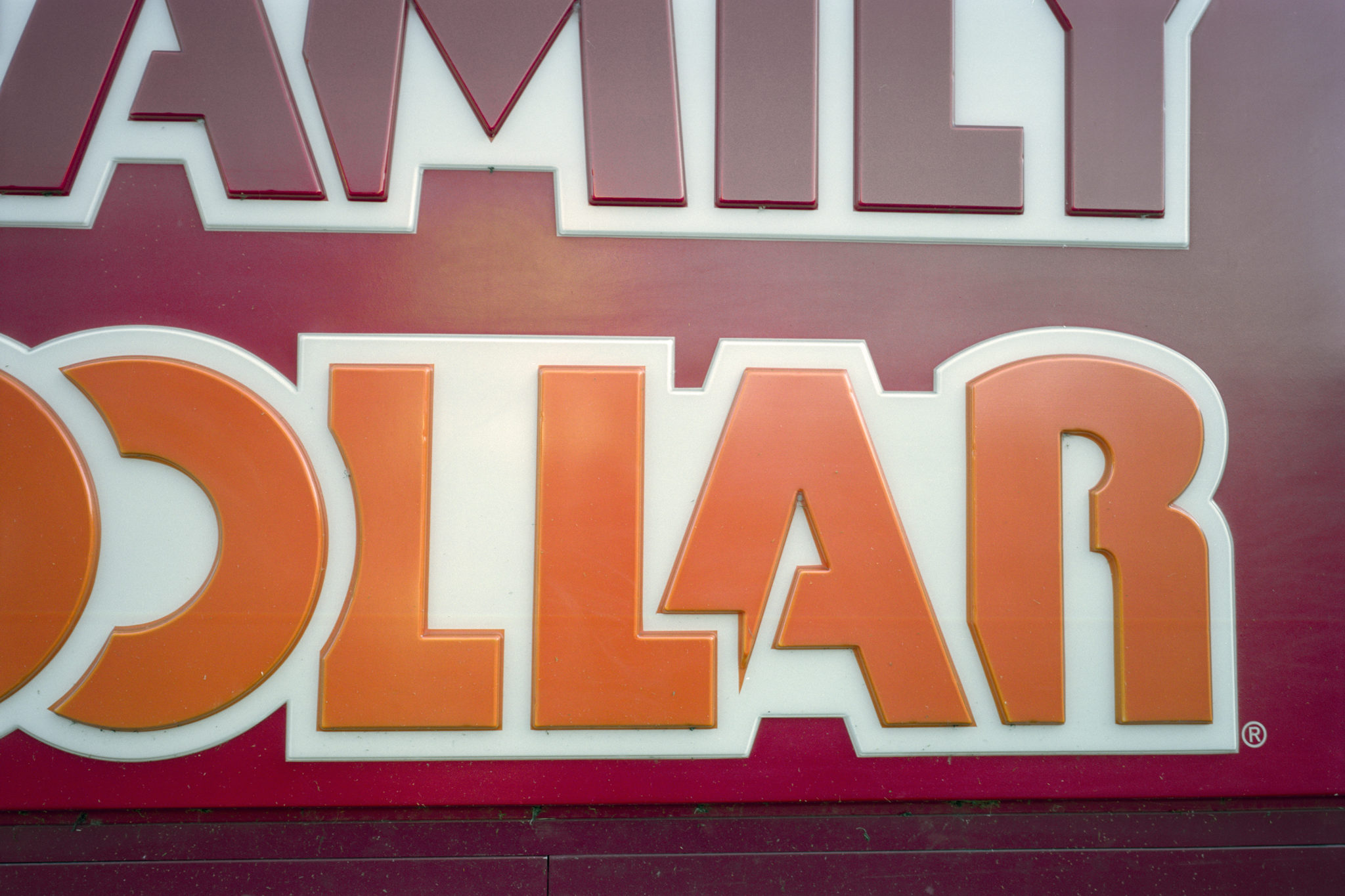 In Buffalo, the actions of urban planners, state and federal authorities, and the real-estate industry have denied the residents of the east side a standard of living equal to that in other parts of the city and surrounding communities. Beginning in the 1930s, parts of the east side were redlined: their housing stock deemed undesirable by mortgage lenders, they were outlined in red on maps and excluded from home loans and economic investment. These red zones, where most African Americans lived, grew into a large, segregated enclave for the city’s Black residents. Government and business policies stemmed the flow of capital to these neighborhoods, creating a segregated bubble characterized by undermaintained housing, low walkability, few real grocery stores, myriad vacant lots, and underperforming schools. Such tactics of discrimination were widespread and have been documented as taking place as recently as 2010, according to a lawsuit against Evans Banks by the state of New York. 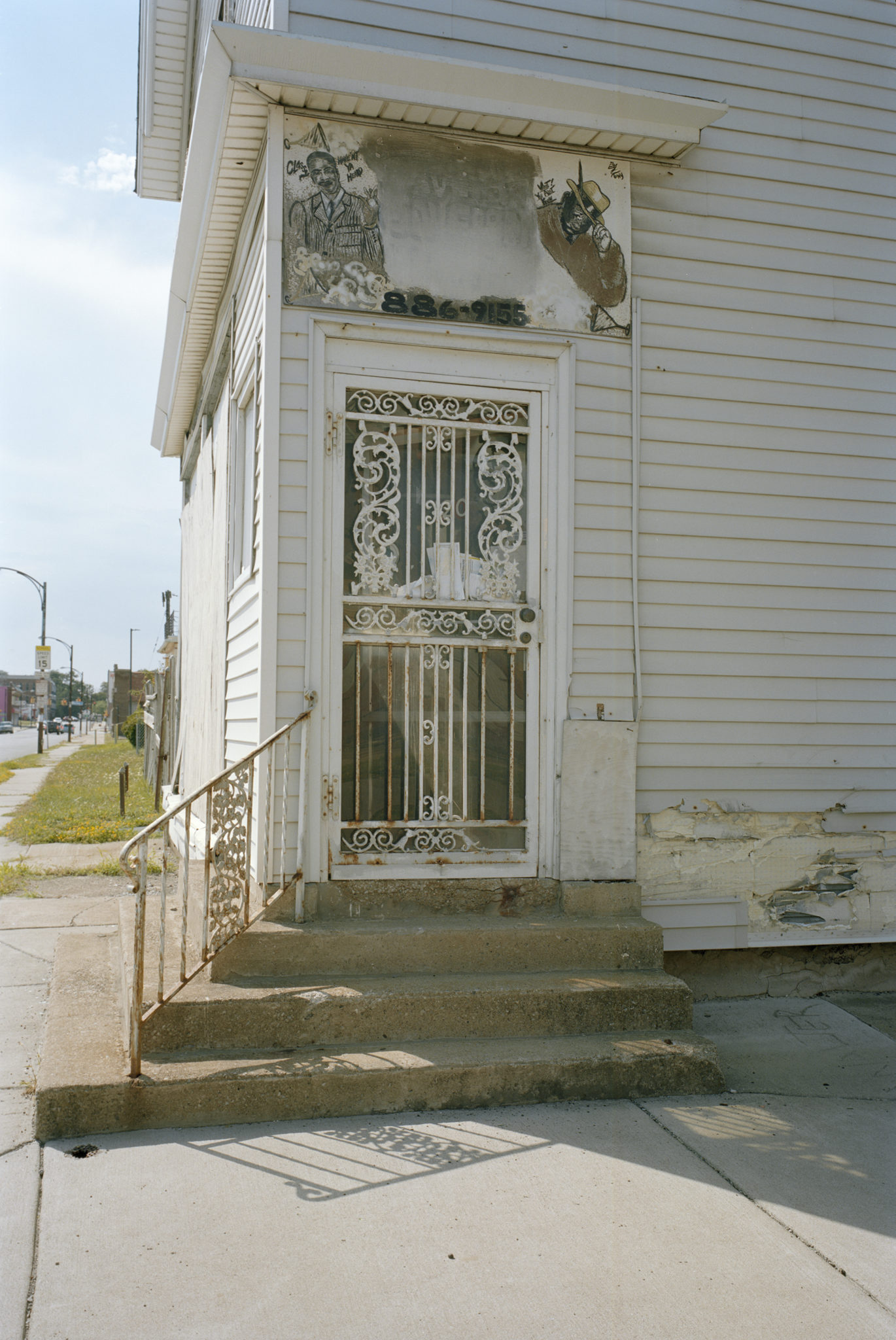 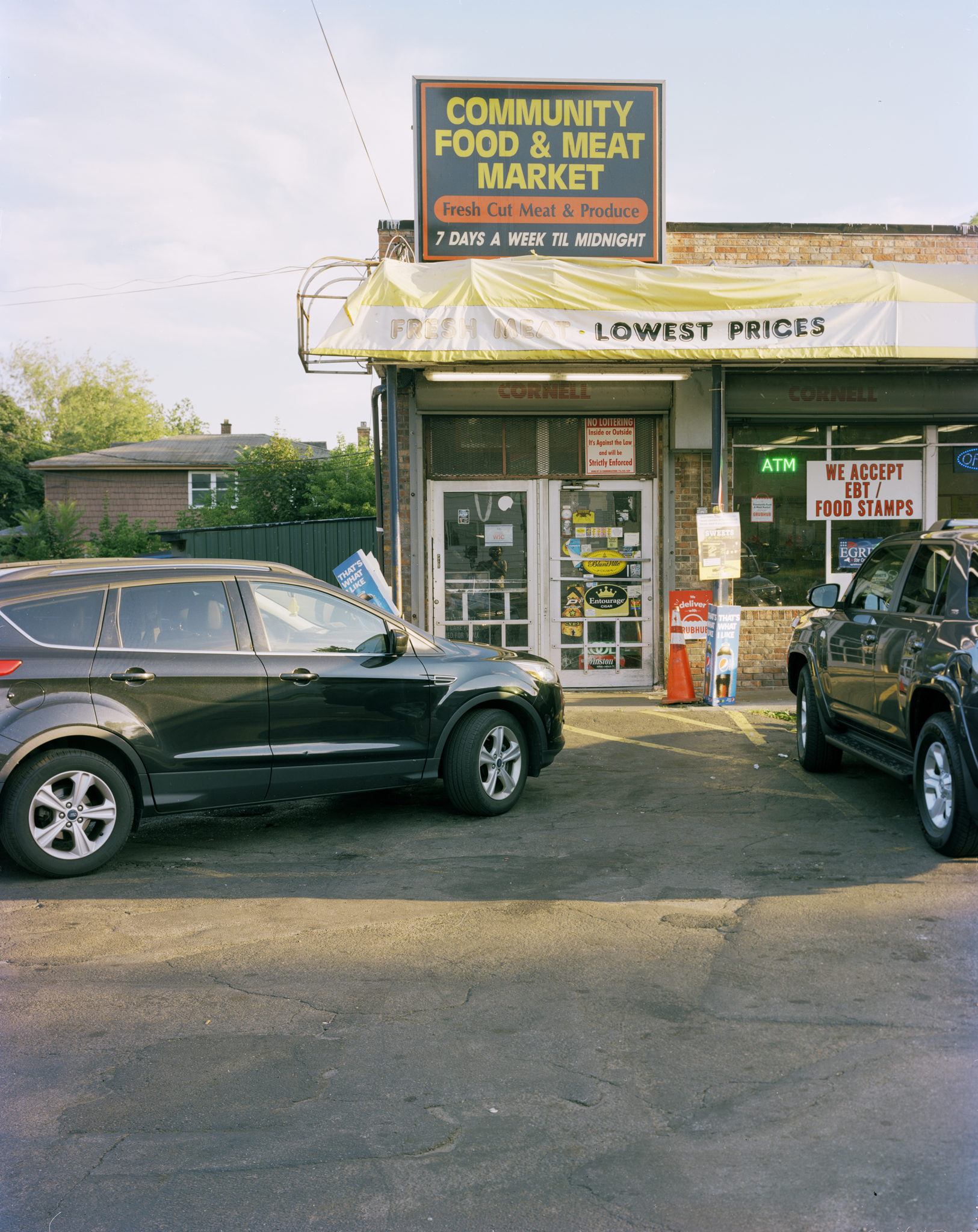 The fundamental, most basic issue often gets lost. That was, they were building a system of valuing land. And anchoring that system of valuation of land was exclusivity and residential segregation [which] would become a powerful force, because it cleanses the space of people that interfere, theoretically, with value. And out of this comes the simple notion: the more exclusive and white a space is, the more valuable the land. 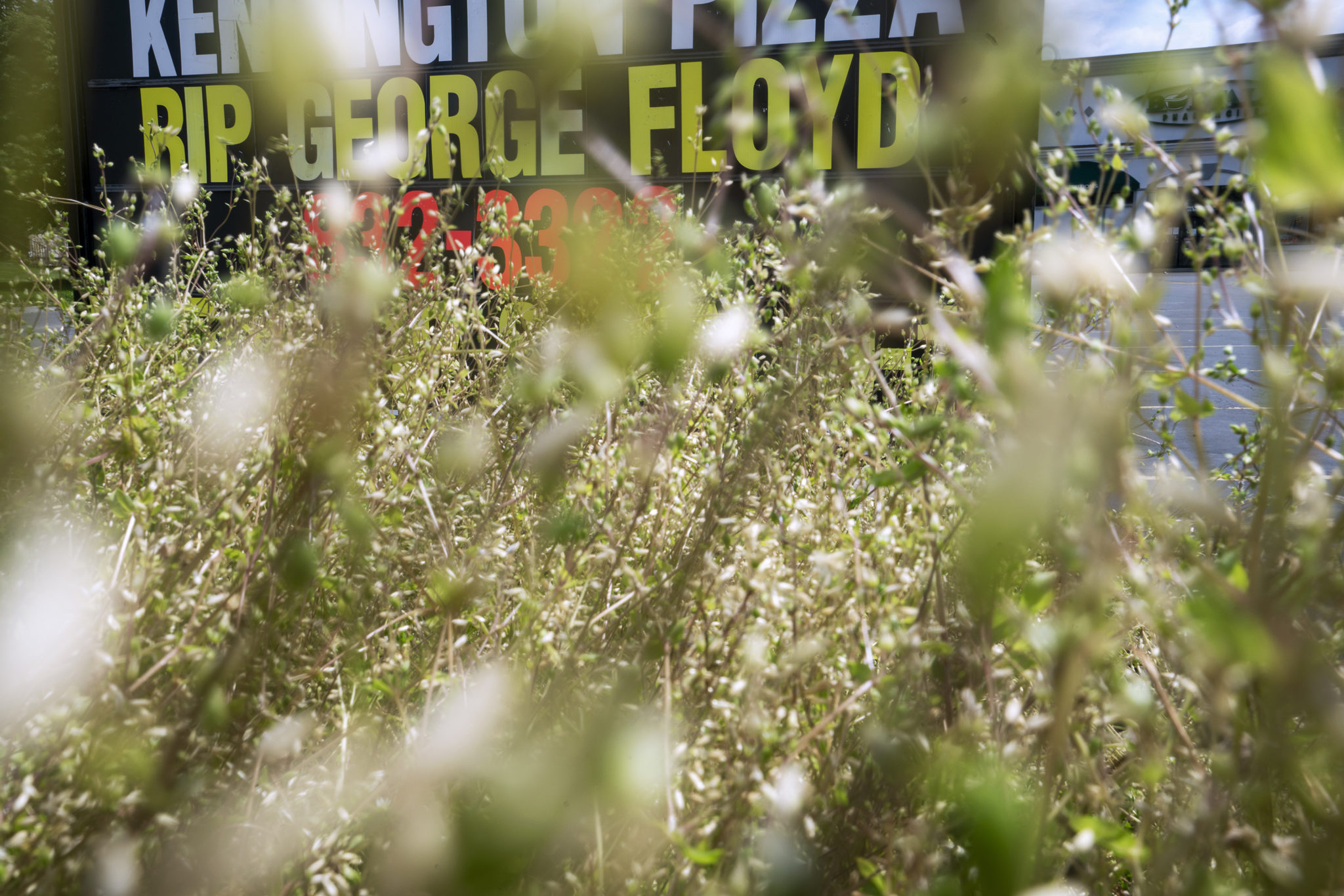 Unfortunately, this negative exclusivity described by Taylor perseveres, adding wealth to suburban communities and on the west side of Buffalo, while extracting wealth and well-being from the east side, leaving it prey to exploitative development. According to a 2018 study by the Open Buffalo Innovation Lab, “Buffalo-Niagara is one of the most racially segregated metropolitan regions in the nation. While racial segregation has declined slightly in recent years, economic segregation has increased, resulting in neighborhood conditions growing worse—not better—for most people of color in the region.” Given the intersection of this segregation with the unequal impact of the pandemic, the last year and a half have laid bare the stark consequences of segregation for the lives of people of color, who are calling for change not only east of Main Street, but throughout the country.

Explore the Redlining Buffalo project, including photography, audio, maps, and resources, at www.RedliningBuffalo.org.

Yola Monakhov Stockton is an artist working in photographic and documentary-based practice. Author of The Nature of Imitation (Schilt), she directs the photography program at SUNY Buffalo State.

Jared Thorne holds a BA in English from Dartmouth and an MFA from Columbia. An associate professor of art at the Ohio State University, his work speaks to issues of identity and subjectivity as they relate to class and race in America and abroad.