YOU’LL FORGIVE ME, I hope, if this editorial amounts to a pandemic journal. The losses of these weeks impinge upon our imaginations like a corrosion, eating away at our creative capacities. Our lives have been dictated by a microscopic, invisible force that pushes us apart like magnetic repulsion. It has been a work of mourning, even if we don’t give ourselves permission to name it as such. We have lost loved ones; lost confidence in our institutions; lost both community and privacy; lost sanity and the simple things that give joy. Many of us have lost the mental bandwidth to dream and make. Can we find something in all this loss?

It seems almost perverse that the first book I turned to after shelter-in-place orders were issued was The Art of Solitude by Stephen Batchelor. I say perverse because the notion that quarantine could be an opportunity for monkish contemplation is part of the empty-nester survivor’s guilt I carry as friends with younger children vie with Leviathan just to get through the day. Perverse because my secure retreat depends on risk to healthcare and delivery workers who don’t have the luxury of being sequestered with a library.

And yet isn’t solitude necessary for creation? Is this strange situation an opportunity to reconsider something about art-making?

Batchelor is a scholar of Buddhism, and while Montaigne is one of the primary voices in The Art of Solitude, another is the “Chapter of Eights” from the Buddhist scripture Sutta Nipata. I was captivated by the opening stanzas:

The creature concealed inside its cell—
a man sunk in dark passions
is a long, long way from solitude.
Hard is it to let go of what drives us,
hard to be free from the wants
that cleave to the thrill of being alive,
hankering for what’s gone and to come,
hungering for those delights now—no one else can save you.

I had hoped that enforced enclosure would provide the solitude I’ve long sensed is required for creativity. But Batchelor immediately punctured that illusion: solitude is not merely an environmental condition. Being stuck in the house was not a sufficient recipe for achieving it. This passage from Montaigne confronted me in quarantine:

In ridding ourselves of the courthouse and marketplace we do not rid ourselves of the principal worries of our life. Ambition, covetousness, indecisiveness, fear, and desires hardly abandon us just because we change address. They pursue us into the monasteries and schools of philosophy themselves. Neither deserts nor caves nor hair shirts nor penance can extricate us from them. That is why it is not enough to remove oneself from people, not enough to go somewhere else. We have to remove ourselves from the habits of the populace that are within us…. We keep returning our gaze to the things we have left behind; we fantasize about them constantly. Our malady grips us in the soul, and the soul cannot flee itself. So we must bring and draw it back into itself. That is true solitude: it can be enjoyed in towns and royal courts.

What began as an illusion—shelter-in-place as enforced solitude—nonetheless became an occasion for reflection and self-examination. Why solitude? And how?

Montaigne’s suggestion of a “true” solitude—a solitude always available, apparently, even amid the bustle of airports and the marketplace—finds an echo in another French writer four hundred years later. The opening chapter of Maurice Blanchot’s Space of Literature is called “The Essential Solitude.” This is to be distinguished from other sorts of solitude. “Solitude as the world understands it,” for example, “is a hurt which requires no further comment.” I think I know what he means. But Blanchot also cautions that he’s not talking about “the artist’s solitude either”—Rilke in his castle. The artist’s solitude “is not the essential solitude. It is concentration.” A scarce commodity in quarantine, in my experience.

So what is this “essential” solitude? It is the singularity of the writer’s (or artist’s) “work.” Here, says Blanchot, is “the essential solitude. It excludes the complacent isolation of individualism; it has nothing to do with a quest for singularity.” The artist’s or writer’s “work” shouldn’t be confused with the production of this book or that poem or a particular painting. The book, the poem, the painting: these are simply instances where the artist or writer agrees to let the current state of the work find an audience. But the work continues. “The writer never knows whether the work is done. What he has finished in one book, he starts over or destroys in another.” It is this infinite, ongoing work that is solitary, Blanchot argues. “[T]his does not mean that it remains incommunicable, that it has no reader. But whoever reads it enters into the affirmation of the work’s solitude, just as he who writes it belongs to the risk of this solitude.”

Here he suggests the importance for writers and artists of keeping a journal: “The journal represents the series of reference points which a writer establishes in order to keep track of himself when he begins to suspect the dangerous metamorphosis to which he is exposed.” The journal, a “solitary” writing, “is often written out of fear and anguish at the solitude which comes to the writer on account of the work.”

And then this insight that blazes even more brightly in coronavirus time: “To write is to surrender to the fascination of time’s absence. Now we are doubtless approaching the essence of solitude.” What is the essential solitude necessary for such writing? A surrender to fascination—a retreat that is nonetheless turned to the world. Blanchot’s commentary is at once cryptic and poetic: being alone “is intimacy with the outside which has no location and affords no rest,” a retreat that is like a “fissure where the exterior is the intrusion that stifles, but is also nakedness, the chill of the enclosure that leaves one utterly exposed. Here the only space is vertiginous separation. Here fascination reigns.”

Such fascination, Blanchot tells us, is a kind of seeing-at-a-distance which is nonetheless intimate; where what you see “seems to touch you with a gripping contact, when the manner of seeing is a kind of touch, when seeing is contact at a distance.” Solitude isn’t just protection for “time to” create; nor is it merely concentration; solitude is the cultivated capacity for the fascination that underwrites the calling of one’s (lifelong) work. “Fascination is solitude’s gaze,” Blanchot concludes. Which is why “to write is to enter into the affirmation of solitude in which fascination threatens.”

“There is more to solitude than being alone,” Batchelor cautions. “Solitude is an art.” Solitude, I’m learning, is not something that happens to you. If I am going to find solitude, something will be asked of me. Solitude involves risk—the “threat” of fascination, as Blanchot put it. But why would that be threatening?

Batchelor’s book is like a weaving of meditations, and one of its brightly colored threads tracks the work of artists in solitude. He recalls his first encounter with Agnes Martin’s Faraway Love at the Tate Modern, a five-foot square of horizontal lines in acrylic and graphite. It might at first appear mechanical, even inhospitable, until one sees the human imprint in pencil lines and fingerprints on the surface. Batchelor is intrigued by what might appear to be a tension. “Agnes Martin maintained that her paintings were complete only when they evoked in the viewer the same quality that inspired her to paint them.” The paintings are an open risk, looking for an end in communion. And yet Martin would tell an interviewer in 1997: “I paint with my back to the world.” Cloistered on a New Mexico mesa, “Agnes inhabited that indefinable space between artistic practice and ascetic practice.” 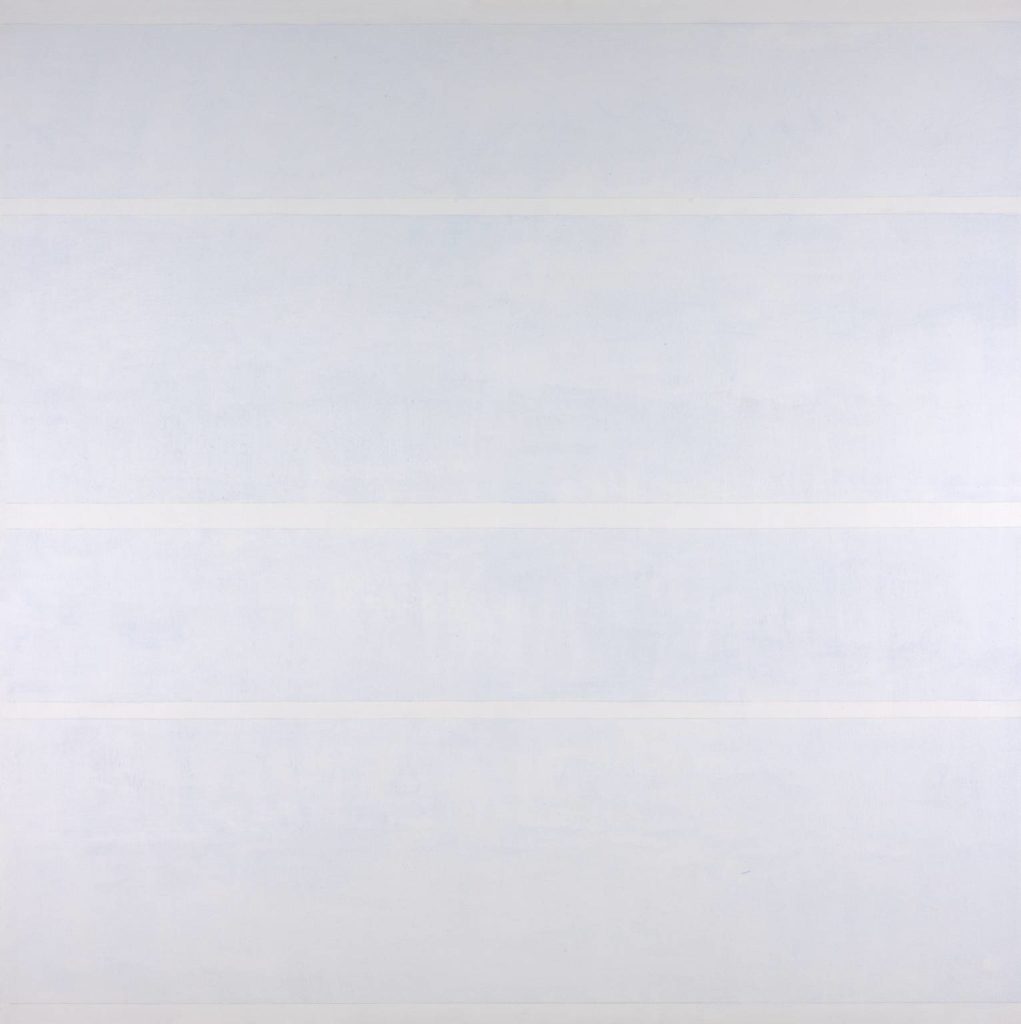 Faraway Love, 1999 Agnes Martin, (Acquired jointly with the National Galleries of Scotland through The d’Offay Donation with assistance from the National Heritage Memorial Fund and the Art Fund 2008.)

The hunger for art has endured, even intensified, in this pandemic: as consolation and hope; as (admittedly) distraction and entertainment; as a means of making sense of our moment yet also transcending it. Artists and arts organizations have responded with generosity: free virtual concerts, digital gallery tours, online poetry readings.

I’ve been especially grateful that the Metropolitan Opera, while its stage is dark, has offered free streams of encore performances for weeks, each night a new treasure. This meant I finally had the opportunity to witness a performance I’d only read about: the May 2019 staging of Francis Poulenc’s Dialogues des Carmélites. Adapting the libretto from a text by novelist Georges Bernanos, Poulenc brings to life the drama of Carmelite martyrs of the French Revolution’s reign of terror through a score that weaves traditional sung prayers with his own modern musical sensibilities.

In many ways, the opera is an extended meditation on fear. The harrowed Blanche de la Force seems cursed with a fragility of nerve; she can’t bear the burden of being in the world. Shadows frighten her; every noise elicits a start. So the mob rocking the gates of her family’s chateau is an unimaginable horror. When she asks her father for permission to join the Carmelites, he admonishes her: a woman less proud “wouldn’t renounce the world out of spite.” “I don’t scorn the world,” she replies. “But I don’t know how to live in such a strange and disturbing place.”

Life in the convent dispels any myth that it is an escape. It is not a protection from the terror, nor a place to flee despair (painfully illustrated in the death of the prioress). Blanche’s education in reality begins when she first presents herself as a candidate. This is not a place for the mortification of sin, the prioress warns her, or a place to preserve your virtue. “This is a house of prayer!” she tells her sharply. “Prayer alone justifies our existence. To those who do not believe in prayer we are impostors and parasites.”

This, of course, is precisely why they are martyred. The tempo of the hungry guillotine reminds us that a world that does not believe cannot tolerate their “counter-revolutionary” existence. Like her predecessor, the new prioress refuses to justify their existence in terms the world can understand. She is willing for their order to appear useless. Little does the world know, these women have turned from the world for the sake of the world. Their cloister contains multitudes. The entire world is suspended in the prayers of these “parasites.”

We turn from the world for the sake of the world. Here, perhaps, is that intersection of the ascetic and the artistic again. When the artist retreats to fascination, there is a risk of appearing the parasite, as if fiddling while Rome burns. But the studio, like the convent, is a retreat for the sake of others. Like the strange paradox of social distancing, where we step away from our neighbors in order to protect them, so the artist loves the world by retreating from it. The art of solitude is ultimately social. “Here lies the paradox of solitude,” Batchelor concludes. “Look long and hard enough at yourself in isolation and suddenly you will see the rest of humanity staring back. Sustained aloneness brings you to a tipping point where the pendulum of life returns you to others.” The artist risks solitude to give back another world to her neighbors.