THERE ARE QUIET SPACES in museums across the country I treasure as almost private retreats. While crowds swarm the European and modernist galleries abuzz with selfie sticks and school field trips, I relish the hush of the decorative arts collections. Secluded, blissfully neglected by the guidebooks, these are spaces to linger and, fittingly, dwell.

The period rooms at the Met, for example, are sumptuous transports. I could spend days in the bedroom from the Sagredo Palace or the tapestry room from Croome Court, each a feast for the senses. I lose myself in carved curlicues on seventeenth-century bedposts, want to dive into the red plush of velvet wall coverings, am mesmerized by intricate silver inlays that adorn a mahogany desk, dreaming of what it would feel like to write in such environs.

At the Art Institute of Chicago, I’m enthralled by the art-deco wall coverings from the Chicago Stock Exchange trading room. Adler & Sullivan’s design has the feel of controlled chaos (perhaps mirroring the trading room floor), with looping, oblong spirals in greens, golds, and reds like a Persian rug on a wall. Nearby is gallery 162, home to American decorative arts from the twentieth century, where the luxurious bends that the Eameses imagined for humble plywood always bring a sense of delight. And then there are the graceful, alluring curves of Noguchi’s coffee table, at once whimsical and sensual, its base the outline of a lounging body, its glass top disappearing yet still functional, a kind of invisible magic.

It’s in this section of the museum that an uncanny encounter takes place: here on a pedestal is a coffee table that I’ve also set drinks on in my son’s living room. Here the table is at a distance, literally untouchable, an object of contemplation. But in my son’s apartment, I’ve experienced the Noguchi more intimately, suspending food and glasses and art books, a hub of conviviality. Removed from its intended function and home, the table is now an art object. 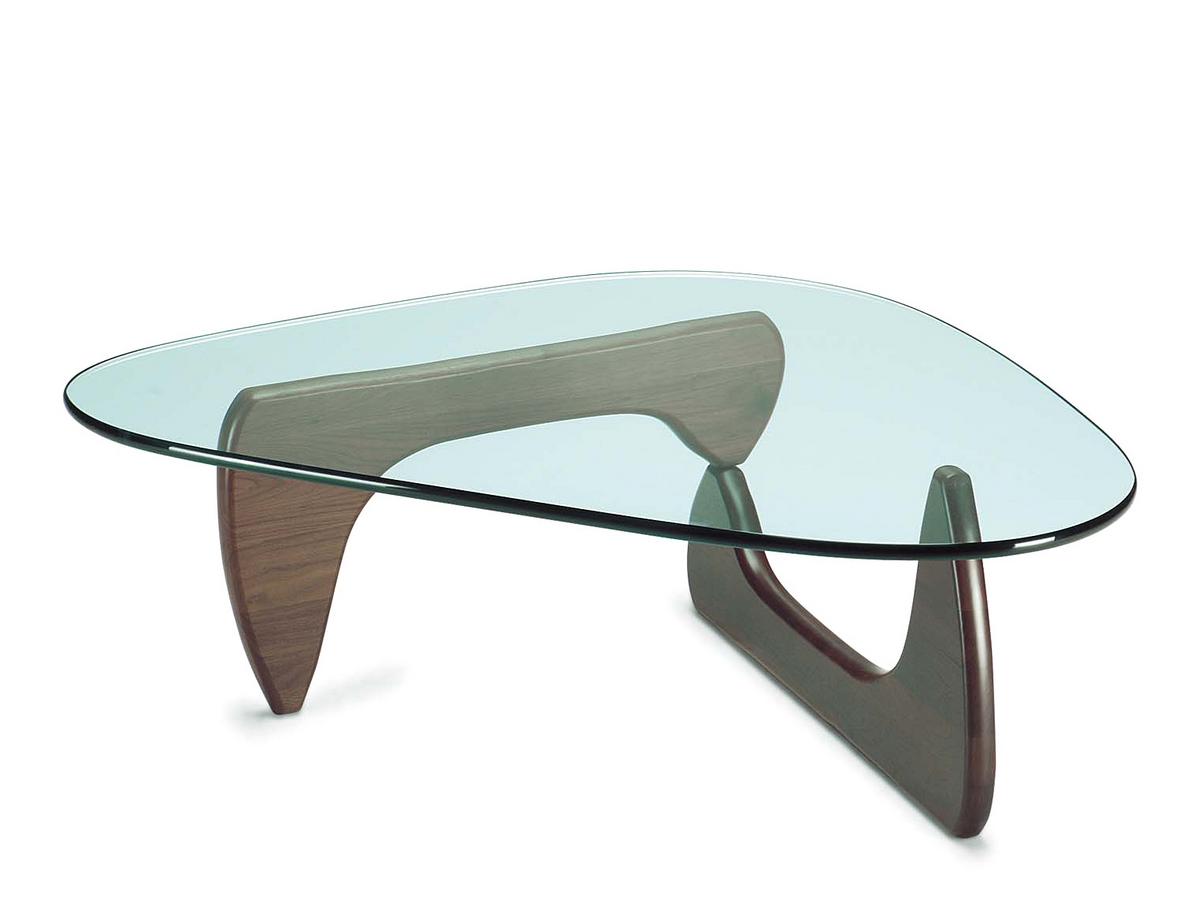 But the museum doesn’t make this table artful. Its relocation to a gallery doesn’t bestow beauty but simply highlights what is already there—the imaginative, playful design already in that table when it held canapés and cocktails in my son’s living room.

When Duchamp placed the famed urinal on a pedestal and called it “Fountain,” he was not thereby transforming something ugly and unmentionable into art. Rather, the recontextualization illumined the beauty in this “unmentionable” object: its sculpted, curvaceous lines; its pristine white like precious china; even its ergonomic response to human bodies and their needs. What a remarkable work of creativity and ingenuity, hidden away unseen. Even in our privies, Duchamp was saying, we find feats of human imagination.

In the same way, consider a visit to the decorative arts gallery an exercise in perception therapy, retraining your eyes to see the delights of design all around you, each of them its own tiny pleasure twinkling with the allure of artifice. It might be the handle of a chef’s knife, or the leathery sculpture of your best friends’ boots; you might notice the minimalist beauty of a Bauhaus lamp or the pleasing lines of your favorite writing instrument; you might find a special joy in the kerning of typography or the careful piecing of an heirloom quilt. When we become attuned to the artfulness of the objects closest to us, a living room or a sanctuary or even a stock exchange floor can blaze like a constellation of imagination.

Calvin Seerveld calls this “encapsulated” art or “double-duty” art. If fine art is the art we contemplate, double-duty art comprises things artfully fashioned to accomplish some other function like sitting or slicing or dwelling. Today we might simply call this design. But at the end of the nineteenth century, in a manifesto for the significance of the decorative arts, Oscar Wilde called it the “art we live with.”

In his Socratic dialogue “The Critic as Artist,” Wilde’s stand-in Gilbert considers the qualifications of a “true critic”—one who not only recognizes beauty but makes art in the very work of criticism. The “primary requisite for a critic,” says Gilbert, is “a temperament exquisitely susceptible to beauty.” But how to acquire such a temperament? Well, says Gilbert, it’s caught more than taught. It’s less about a curriculum than immersion in the right surroundings. Such an education is possible, Gilbert goes on to argue, even in dreary industrialized England:

even for us, there is left some loveliness of environment, and the dullness of tutors and professors matters very little when one can loiter in the grey cloisters at Magdalen, or listen to some flute-like voices singing in Waynfleete’s chapel, or lie in the green meadow, among the strange snake-spotted fritillaries, and watch the sunburnt noon smite to a finer gold the tower’s gilded vanes, or wander up the Christ Church staircase beneath the vaulted ceiling’s shadowy fans, or pass through the sculptured gateway of Laud’s building in the College of St. John.

A sentimental education can be had, Wilde suggests, simply by moving about such marvelously designed spaces.

But such an education is not only for the privileged elite who can attend Oxford and Cambridge, Gilbert emphasizes. Such susceptibility to beauty can be carried in wallpaper, he avers. “Certainly, for the cultivation of temperament, we must turn to the decorative arts: to the arts that touch us not to the arts that teach us.” In wallpapers and vases, draperies and floor coverings, the soul is schooled by design.

[T]he art that is frankly decorative is the art to live with. It is, of all our visible arts, the one art that creates in us both mood and temperament. Mere colour, unspoiled by meaning, and unalloyed with definite form, can speak to the soul in a thousand different ways. The harmony that resides in the delicate proportions of lines and masses becomes mirrored in the mind. The repetitions of pattern give us rest. The marvels of design stir the imagination.

Fine art doesn’t have the corner on either the imagination or beauty, because we inhabit a workaday world that is suffused with design. These quotidian arts that touch us, the arts we live with, evoke the imagination more subtly while also serving us in other ways. Their embedded artfulness is like a soundtrack for everyday life, in the background, unnoticed, yet affecting us. Just because these designed objects serve a function doesn’t mean their form doesn’t pluck the strings of our imagination.

It’s exactly why our souls shrivel and shrink from the hideous pragmatism of so much of late-modern culture: the corrugated metal boxes of retail stores (and far too many churches); the cinder-block doldrums of too many classrooms; the ubiquitous plastic chic of hotel lobbies and glass tower condos; the stamped metal cutlery in cafeterias; the garish visual noise of billboards.

In many ways we are prepared and primed for encounters with artworks by the environments we come from. Our everyday surroundings furnish the imagination—or not—for encounters with art. Decorative art, Wilde argues, “not merely prepares the soul for the reception of true imaginative work, but develops in it that sense of form which is the basis of creative no less than of critical achievement.” The furnishings of a living room are subtly training the soul to encounter the nuances of color in a painting. Putting your feet up on a Noguchi coffee table over time is its own apprenticeship for an encounter with a Calder sculpture. A young person is prepared for poetry by the song of speech carried even in a parent’s admonitions.

But notice: Wilde’s point isn’t just about the reception of art; it is also a claim about its creation. This cultivation of the soul’s sensibility doesn’t just prepare us to encounter fine art; he suggests this is a subtle formative factor for those creating fine art. Which is an occasion for those of us who aspire to be artists to ask: How are we furnishing our imaginations? What does the wallpaper of our lives look like?

Our challenge is not that of late-Victorian Britain. We find ourselves facing a different kind of bleakness—one born of a certain kind of visual saturation. We are trying to create in a world where fine art has been commodified and now is papered ad infinitumon coffee mugs and throw pillows and tote bags. The fate of “the work of art in the age of mechanical reproduction,” as Walter Benjamin put it, is to become a deracinated decoration in which the likes of Van Gogh and Picasso are rendered kitsch by Ikea, and the alluring tropes of Sexton and Plath are hollowed out by insta poets. When fine art becomes decoration, it doesn’t thereby become art we live with: it just becomes one more thing we consume. Indeed, furnishing our imaginations will require a certain kind of constraint, an intentionality that carefully chooses what will constitute the backgrounds of our creating, the soundtracks of our making.

Wilde is once again ahead of us here. You’ll note that many of his examples of spaces that can hone our aesthetic temperament are public, shared—recalling, one must admit, an era in which public architecture and design reflected a democratic commitment to beauty that was accessible to all. Perhaps one strategy for intentionally furnishing our imaginations is seeking out such spaces and dwelling in them.

For years, one of my favorite spaces to write in was the periodicals room at the main branch of the Grand Rapids Public Library, built in 1904. To get there I would climb a veined Carrara marble staircase surrounded by Corinthian columns and vermillion walls that were so striking I felt like I was walking through a tunnel to another world. The tall, arched windows poured light into the space, and the amber-colored walls were soothing under cathedral-high ceilings. On the long oak tables stood Tiffany-ish desk lamps, friendly to literary ambition. And here it all was for me, each day, for free: a somber but delightful space in which to make, I hoped, pleasing but serious things.

If one way to furnish our imaginations is to find shared spaces bequeathed to us by generations that have gone before, another strategy takes me back to that coffee table in my son’s living room. Suffice it to say, my BFA-degreed son has not won the venture capital lottery. Instead, he has cultivated a Wildean aesthetic temperament, developing an uncanny eye for finds at garage sales and thrift stores. That Noguchi coffee table was an estate sale steal. A marble Angelo Mangiarotti bowl that sits atop it was twelve bucks at an out-of-the-way thrift shop. His home is more Apartment Therapy than Architectural Digest, but that hasn’t stopped him from creating a space that is characterized by exactly what Wilde celebrates. Whenever I visit, it always feels like a room where I am inhaling with my imagination.

While we creatives apprentice ourselves to various crafts, aspiring to art that is “fine,” we might also look for subtle ways to decorate our daily lives with new intentionality. There is a training of the soul in the arts we live with.