WHAT DO I LOVE WHEN I LOVE A POEM? What’s happening when a new poem worms its way under my skin such that I keep returning to it, sometimes just for the delight of reading it aloud? I think, for example, of Leila Chatti’s mesmerizing “Echo (All That She Lost)” in a recent issue of Poetry. It is a revel in language that mourns the loss of words.

—–All she lost she lost
—–at once. Her mouth could no longer offer,
—–at breakfast, apricot,
—–acerbic syllables on the tongue. Acquiesce  was gone, allure
—–and ardent, ache  refused to be named
—–but remained a thorn in her

The poem wends through the alphabet like a tour of a museum of privation. After the brief opening line, the rest is one long sentence; each comma delays the finality of the hard stop, the end of speech. In Chatti’s hands, the mongrel that is English becomes a song in which the echoes of Saxon and Romance ring sacramentally.

———————-…she wanted
—–want, wanted wrong, it exhausted her, her
—–xenogenic lexis, her inexpressible grief, what she would give to whisper
—–yellow  just once to what was, petals and morning
—–yawning brightly before her, to sigh
—–yes, to say  you, oh, to say you—but her maw hung open. Futile
—–zero, destitute.

Echo’s speech is being lost, but the poet’s language is so charmed that we readers are lavishly gifted with something new. The poem performs what philosopher Charles Taylor argues: that we are “language animals.” Words, for humans, are both oxygen and breath, and Chatti’s poem attunes me anew to breath and pause, to the way consonants can be soft and languishing or, as she notes, acerbic, like ruptures. Words are portals that let the world in, making experience possible; but words are also like gentle fingers we use to feel our way around the world. To lose them is to be lost. Perhaps that’s why we sometimes need the poets to sing for us.

I read Chatti’s poem over and over, losing myself in it, then re-emerging to ask: Why do I love this poem? Do others? If not, why not? Should they? Should I?

The same questions arise in negative when I see people enthusiastic about poetry that, to me, feels predictable, clichéd. Am I missing something? Are they? 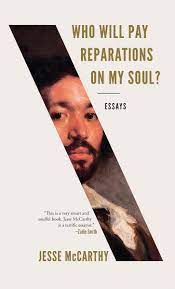 This is why we need criticism. Criticism is an exercise in understanding why and what we ought to love. My catalyst for thinking about this is a virtuoso book of criticism by Jesse McCarthy, Who Will Pay Reparations on My Soul? McCarthy’s criticism—whether it’s an essay on trap music or the poetry of Sappho, Kehinde Wiley or Kara Walker—is deeply humanist insofar as he imagines that the best way to wrangle with fundamental questions of who we are called to be is through criticism, that intersection of art and intellect. For McCarthy, criticism leads us to wonder, because the best critical question “generates new and even better questions.” Criticism is how we steward an inheritance into a future: “It is through acts of remembrance and flights of imagination that tradition conjures the future.”

To critique is to wonder. On its surface, this might seem like a strange conflation. Criticism, after all, is about judgment (from the Greek krino, to separate, discern, judge). Judgment feels restrictive, a way of shutting down, whereas wonder has the feel of openness, like a path that emerges into a clearing and leads to more paths beyond.

But criticism is not just evaluation and assessment; the critic doesn’t merely corral and categorize. Criticism is an invitation to encounter; it plunges us more deeply into the work of art. The best critics take us into a poem or a painting in a way that feels like passing through the narrow door of a church to have the sanctuary explode in spaciousness. The best criticism reverse-engineers our experience by finding words for it. The critic enables us to interrogate our experience of a film or album or novel or exhibit in such a way that we confront new aspects of ourselves.

The New Yorker critic Peter Schjeldahl once wrote a moving review of a Piero della Francesca exhibit at the Frick. As he often does, Schjeldahl found words for what moves us. Piero’s saints and believers are not impassive; they are “preternaturally calm,” communicating a deep cosmic trust for which we might pine. Piero has a “magnetic dignity” that draws us. Revisiting these works in 2013, Schjeldahl recalled touring Tuscany on a Vespa when he was just twenty-three years old and first seeing Piero’s Madonna del Parto. The encounter compelled him to find words to describe “the picture’s held-breath tenderness and its air of sharing a deeply felt, urgent mystery. In another age, the experience might have made me consider entering a monastery. Instead, I became an art critic.”

Called to judge? Indeed. Criticism is an act of judgment for the sake of all the urgent mysteries that press upon us in the arts. Like an episode of How It’s Made, criticism shows us how art works. The critic lets us glimpse the invisible forces that move us. I’ll never forget James Wood’s explication, in How Fiction Works, of a single sentence by Henry James, guiding me into the mysteries of free indirect style. “The sentence pulsates, moves in and out, toward the character and away from her—when we reach ‘huddled’ we are reminded that an author allowed us to merge with his character.” I never read novels the same way again. In this sense, you might call good criticism a form of faith seeking understanding: Lord, I believe this is beautiful; help me understand why.

Good criticism also helps us see why some art doesn’t work, or works poorly, activating the worst in us. When criticism is judgmental in the sense of being censorious, that too is in the service of art and our experience. The critic is showing us why we need and deserve better. Like a nutritionist helping me to see my addiction to corn syrup, a critic who helps me to see my sentimentalist proclivities loves me enough to tell me I need more, and why my soul deserves better. A critic who shows me what’s simplistic and tired about the poetry I gravitate toward is inviting me to experience language afresh as a way to discover new corners of myself.

If criticism is the path to wonder, it is also the way to learn what we (ought to) love about art. The best criticism helps me reevaluate some of my aesthetic devotions. It is an exercise in rightly ordering my (aesthetic) loves. One feat of McCarthy’s criticism is to make trap—a subgenre of hip-hop that is a million miles from my comfortable, privileged existence—something essential. Through a masterful compilation of examples, McCarthy demonstrates that the “magic [of trap] was born out of a unique historical and material experience in world history, one that no other group of people underwent and survived for so long and in such intimate proximity to the main engines of modernity.” To listen to trap is to hear “the funeral music that the Reagan revolution deserves.” Sometimes the critic is the artist.

Let me come back to the poetry that others love but I cannot. I have to confess that, all too often, it is “religious” poetry—what we might describe as sacred or even liturgical poetry. Unlike the surprise I experience when Chatti sets my world atilt and brings it to light, the proliferation of sacred poetry often feels more petrifying than resurrecting.

There’s a sad irony to this. Taylor also talks about what he calls “the fragility of ‘poetic’ language.” Poetic language always does more than it says; it performs, makes, creates. Taylor describes this as poetry’s unique allure of “resonance,” the way language can make us aware of corners of creation by sending out sounds that reverberate and return. But such resonance is vulnerable to time: “What reveals by resonance can cease to. The language may go dead, flat, become routinized, a handy tool of reference, a commonplace, like a dead metaphor.” Taylor looks to Gerard Manley Hopkins’s poetry as a response to the sordid doldrums of Victorian England, like shards of neon in the sepia of an industrial wasteland. But the fragility of poetic language means even Hopkins can cease to resonate. Even pied beauty can go flat.

Hence the irony: too many sacred poets who imagine themselves heirs of Herbert and Hopkins only reproduce the commonplace. Such poetry is subcultural, created to confirm the identity and convictions of an in-group, rather than inviting a wider world to wonder.

Indeed, I’d say what’s most missing from such poetry is the world, or at least the world I know, the one we collectively inhabit in the now. Such poetry breathes the air of some quasi-biblical atemporality. It retreats from the world into a religiosity that feels less real than Chatti’s apricots on a breakfast table.

The “art and faith” conversation would benefit from an embrace of criticism. We do art no justice when we celebrate the bland and welcome the mediocre simply because it is produced by our friends or validates our religious affiliation. Both our aesthetic and spiritual diet is hollowed out when we opt for the comfort of camaraderie and the easy assurances of familiar pieties.

In one of McCarthy’s most incisive essays, “To Make a Poet Black,” he traces the reception of Sappho and unveils the disturbing means by which her Blackness was either erased or invoked as a reason for her dismissal. But in the midst of this story, he also testifies to ancient entwining of poetry and religion, the enduring belief “that spirituality can be activated by poetic use of language.” Poetry has the power to do this, he argues, because—and only when—it operates on the margins of predictability, when language pushes the boundaries of what we expect.

Poetry, in this sense, is one of the vehicles human beings have proposed as most capable of staging an encounter with the limits of empirical experience, an art uniquely suited to expressing threshold states of being that usually suggest deep symmetries between the cosmos and the beholder. The poet is not only the singer of the collective mythos then, but one who casts a spell in the pyramid of our oldest hopes.

The liturgical poets I’m thinking of rarely cast a spell. Perhaps their charms elude me, but I suspect, rather, that their magic has worn out. We need, and deserve, a better enchantment, like the poetry of Leila Chatti, who bears witness to “love, perhaps this is what she longed for / most, as unbearable as it was to be so monstrously human.”

Tags: Charles Taylor criticism James K.A. Smith poetry The Way of the Critic To Judge is to Love