From the underworld, I’itoi led our ancestors, the O’odham, upward into their land, a land stark and dry, yet beautiful. With patience the O’odham came to understand the land.

CARLOS LAMADRID RAN. Beneath him, the ancient earth bore witness. Igneous, metamorphic, and sedimentary rock plumbed ten thousand feet below the surface of the Douglas basin on the lip of the Arizona border. Around the man, who outpaced a fog of dust from border patrol vehicles, the mountains birthed from millennia of tectonic movements sat watchful, stretched out across northwest-trending fault lines. The force of Carlos’s sprint sprayed the thin strata of silt and rock and clay behind him. He paused for a moment to reach down, to grip a brown slab of sanded rock. The earth was his defense against border agents whose tires ground into the streak of red dirt. Carlos took the rock, broken from the weighted promise of the planet’s resilience, and hurled it behind him.

Before the invisible boundary of settlers coiled around the land and called it a reservation, before San Xavier Mission in New Spain, before the Treaty of Guadalupe Hidalgo, before the army began testing bombs on the sacred mountains, before the cattle ranches—life in the desert was a fragile peace. 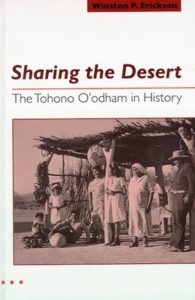 Winston Erickson’s book Sharing the Desert: The Tohono O’odham in History tells the story of people and land to the Tohono O’odham children in their classrooms, the descendants of ancient people who shared the desert with other tribes before it was slashed into pieces called Mexico and the United States. Before O’odham children hear the history of the people who came with surveying tools to carve up the mountains and valleys, of how the land was tricked away, in this book, the O’odham children learn the story of water.

The San Pedro River converges with the Gila River and flows north, meandering through the valley that marks the eastern boundary of the O’odham land. It is the last free-flowing, undammed river in the American Southwest, one of the rivers that cradles the vast territory of the O’odham, a clutch of bright mountains and deserts. The rivers, life-makers in the Sonora, were given names—Santa Cruz, Altar, Magdalena, and Concepción. The settlers named them for the miracle of faith.

Not all the rivers run year-round. They are useless as borders to parcel out land for money. In certain seasons they vanish altogether. The waters of the Sonoran Desert are scarce and wily. In O’odham lands, shy rivers will retreat underground, seeping into the sand, as if to rest from the seen world for a while. A few miles later a river might reappear in its channel, a shifting boundary of collapsing edges. As if to mock the idea of borders, before white settlers and conquering Spaniards made their way to the land of the O’odham, one kind of flood would spread thin across the valley, submerging miles of border under a freshwater sea inches deep.

The water is unpredictable, but it never disappears for good. In the rainy season, the arroyos—washes that gather into channels—flood with the monsoons and nourish the land. For centuries the ocotillo, sagebrush, and galleta grass slowed the flow of the rains to spread the water evenly over the land.

It’s different now. The O’odham tell their children the story of how settlers and cattle ranchers broke the earth. The arroyos run with anger and danger. The rivers seize up. Erosion cuts a clean path for monsoon floods to gather at a ferocious speed. The water takes the land and drowns the people.

It was not always this way.

The border fence sits against a back row of houses in the middle of the neighborhood of Douglas, Arizona. Standing in the street, it is a monster so old it blends into the scenery for neighbors walking dogs and buying groceries. I walk down the sidewalk past white and gray houses, a dull checkerboard, to the place where the massive stutter of rusted steel towers separates me from those who go about their lives in Agua Prieta, Mexico, a few feet away.

Along the path, only wide enough to create a dusty shoulder for patrolling vehicles, there is a shrine for Carlos LaMadrid, who was shot three times in the back for throwing rocks as he ran from the border patrol. Between the rails of the fence, I see the plastic replica of la Virgen crowned with plastic flowers, an altar of stubby candles, a sun-faded picture of a young man.

The border fence is the work of structural engineers from the best universities in the United States. The beams bend inward, assuring that a fall will result in a compound fracture, a pale bone jutting through the skin, as if the body itself testifies to the trauma of walls, of policing the unpoliceable. “The US-Mexican border es una herida abierta where the Third World grates against the first and bleeds,” writes Gloria Anzaldúa. It is an open wound.

Where I live, fresh water is available on demand. I was told the desert is dangerous. But I learn from the Sonora that is not cruel, only careful. The death here is the kind made by collective violence, then blamed on the elements. For the patient and the cautious, for those who remember where, water waits to be found.

The O’odham knew the location of potholes, the tinajas, where long-running streams carved out basins in the rock to cradle water in the dry season. “It is real desert people who lift their faces / upward with the first signs of moisture,” writes the poet Ofelia Zepeda, remembering in her body, the body of her people. Her people followed the water upward into the mountains with the animals, basin to basin, finding the pools stored there. Life has learned how to find the water that disappears from the surface. Life has learned to save and conserve. Life has learned what is necessary and what is spare. “The humming, buzzing, clicking of water life, / the miracle of desert streams / on smooth boulders.”

The desert is movement. Water retreats underground; the roots of the creosote push out like a maze in the sand; pollen filters through the air; birds cross the sky unbounded; tectonic plates slide in the deep places below; migrating jaguars and long horn sheep traipse with internal precision; people trail the movement of water in the land, above and below. Life moves. Life finds the water, follows where the water goes, follows what is needed to survive. Unless a fence blocks the way. The border works against the grain of life.

In the morning, the air is a cold breath from the temperature’s drop in the night. A roadrunner, body like an arrow with tufted head, darts between the rails of the border fence.

Settlers turned the desert into a weapon. I walk further west, out of town where the border fence recedes, shrinking into the rocky wilderness. Finally it is no more than barbed wire against a barricade of wood. There’s no need to protect the border here. The desert will do the work of death on behalf of politicians.

Migrating peoples will look for a way to cross. They skirt the cities and the checkpoints, past the weary immigration judges and the watchful cartels. The desert is not designed for carelessness. It has everything needed for life, all the water it takes to survive, if we can find a way to it.

The border architects who cut apart the land with steel also made an enemy of water. During the monsoons, debris piles up against the fence, drowning the land while killing cattle and migrants. In 1997, eight men attempted to cross the border and died in a grate, overwhelmed by the flood that pounded down the concrete ditch. The silty tirade pinned them down below the rush of piling rain.

There is a cemetery in Douglas where a few plots are carved out for those who died of thirst and heat in the county. Those killed by the border are buried here if their desiccated or drowned bodies go unclaimed. For a long time, the graves were marked with the word “Unknown.” Nameless death is what waits here, the stones warn. The strategy of la migra, the guardians of the border, is that this word will travel back to Mexico, to the cities of Tecomán and Juárez, among the fleeing migrants who will decide it is better to die from hopelessness or bury a child in hopelessness than die of thirst in the cattle land of Arizona. But it is not so.

I put my hand on the fence. I want to pray the fence to ash, but I cannot pray. I take my hand away, and the red flakes of rust cling to my palm.

Along the fence, as I walk back toward town, there is a gate, a medieval-looking lock sealing two hinged doors. This is where the rains, heavy in their season, once ripped a hole in the metal fence. During the monsoons, the water pours into the naturally formed washes, channels unconcerned with border security. And so it was that one year erosion, construction, ranching, and the erection of a massive steel and concrete structure unleashed the power of water, and waters raged through the valley. Twenty-six-foot steel beams reinforced by rebar sunk seven feet into concrete moorings were destroyed.

In response, engineers huddled over their topographic maps. They dug deeper, pouring concrete nine feet underground, raising the wall higher, reinforcing it with an extra ton of metal.

The next wash took the fence out again.

So they built a gate.

They will open it when it pleases them.

As I walk away from the border, back past the gray and white houses, my finger is pricked at my side. A flash of heat spreads up my palm. Without knowing it, I’ve brushed my leg against a cholla, with its barbed spines and a pulse that tells it to spread, that life must move. Several joints of thin spindled cactus have attached to my skirt, traveling with me along the mile of border fence I walked today. I pause to plant them in the ground.

Melissa Florer-Bixler is pastor of Raleigh Mennonite Church and author of Fire by Night and How to Have an Enemy (both from Herald).