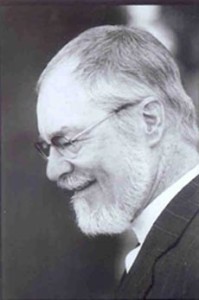 If everyone who fusses over the relationship between Hollywood and mainstream religious America would just follow the life and vision of Ron Austin in search of answers, we’d all be a lot better off. Ron has done it all over the years, from screenwriting and producing to teaching at film school and helping to form a collective that is bringing a fresh approach to movie-making. He has acted for Charlie Chaplin, written episodes of Mission Impossible, produced powerful documentaries, and spoken before Vatican officials at large international events. Through all the hubbub, he has preserved a spiritual equanimity that conveys profound thought, openness and curiosity, and a grounding in the timeless. His insightful writings on film have graced the pages of Image over the years, pointing to a form of filmmaking that neither panders to mass tastes (including mass religious tastes) nor advocates an esoteric high-art approach. The film Blue in Green , created by the Unica collective he helped to found, is funny, accessible, real, and moving. It may seem that such a quiet man will never be heard in the clamor and glitz of the City of Angels , but we have a sneaking suspicion that Ron Austin’s influence is already rippling out to a new generation of filmmakers.

Ron Austin was born in 1934, and was raised in Hollywood. At age 12 he became a child actor, initially working under the direction of Charlie Chaplin and noted teacher Viola Spolin. A graduate of the UCLA film school in 1956, he is a veteran writer and producer in the Hollywood industry, with over a hundred credits in film and television. He is also a member of the Academy of Motion Picture Arts and Sciences and the Directors Guild, and has won two life-time achievement awards from the Writers Guild of America for his service to writers and the Hollywood community.

His television credits include the original productions of Mission Impossible and Charlie’s Angels, Matlock, The Father Dowling Mysteries, and the mini-series Q.E.D. He has also produced numerous documentaries.

A teacher, lecturer, and author of film criticism and history, he has taught at the USC School of Cinema, the American Film Institute, the WGA Open Door workshop, and the Act One: Writing for Hollywood program.

He has served as a director of several organizations, including the Center for Media Literacy and the Writers Guild Foundation, and is president of the Windhover Forum, a Catholic educational non-profit corporation. He is also a founding member of Catholics in Media, Open Call, the City of the Angels Film Festival, and Unica, an interfaith film cooperative. He also serves on the editorial board of Imagequarterly. His published articles include critical appreciations of Charles Chaplin, James Agee, Walker Percy, Federico Fellini and Woody Allen.

His essay, “Blue Screen: Miracles and the Movies,” is in the anthology Things in Heaven and Earth, published in 1998 by Paraclete Press. His essay on the ‘encounter’ of Hollywood and Christianity, originally printed in Image, is included in the anthology Behind the Screen, to be published this fall by Baker Books.

“My most recent activities include serving as executive producer of the documentary The Hidden Gift: War andFaith in Sudan, which premiered at the United States Holocaust Memorial Museum in Washington , D.C., and as advisor to the Unica experimental feature, Blue in Green, which has screened at several festivals in the United States and Europe. I currently reside in Eden, Utah, and am completing a book based on my workshops, offering a spiritual approach to filmmaking.”