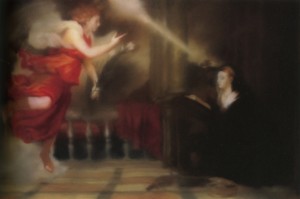 Of all Gospel passages, I think the Annunciation is the scene most represented by poets over the centuries. So I’m always amazed when a new poet has the confidence and vision to re-imagine the scene for us afresh. And that’s exactly what Katharine Coles does in “Annunciation.” I’m taken first by her daring doubling in the opening line: “what occurs occurs…” The mirror imaging of the words expands into the mirroring of the angel and the virgin: neither of them, astonishingly, “matters.” The poem then moves into what does matter: images of light, scissors, openings catch my breath as I realize that the Incarnation is what is being figured here. Then, “we” enter the poem; and, disturbingly, we don’t behave in the self-forgetting way that the angel and virgin do. The poem is dotted with particular questions (“Of? Or to?”); yet really the whole poem hangs in the air as a question: where do “we” fit into the Incarnation? Can we even comprehend it as along as “we can’t forget ourselves”?

What matters is what occurs occurs
Between them, not to them. It’s only that
The angel doesn’t matter, nor the virgin.
A blade of light scissors the air

Between them. To them it’s only that:
A glancing blow, or a kind of cleaving,
A blade of light. Scissor the air
Wide open, then it happens:

A glance, a blow, error a kind of cleaving—
Of? Or to? So something else can enter.
Open wide then. It happens
Those two forget themselves, not knowing—

What, or who?—so something else can enter
And, in entering, replace them.
We can’t forget ourselves. Knowing
Carelessness has brought us to the point

Where in entering we replace them.
The angel doesn’t matter, nor the virgin.
Carelessness has brought us to the point.
What is matters. What occurs occurs.

Katharine Coles’s sixth poetry collection, Flight, will be out from Red Hen Press in 2016. Recent poems and essays have appeared in Virginia Quarterly Review, Poetry, and Crazyhorse. A 2012–13 Guggenheim Fellow, she teaches at the University of Utah.