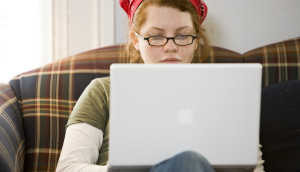 I came to Christianity in my mid-twenties and joined a Protestant church whose denominational arm publishes devotional booklets that called to mind the copies of Watchtowers Jehovah’s Witnesses used to foist on me.

As a new believer, I was supposed to develop a disciplined spiritual life, the cornerstone being morning devotions: Rise at dawn, open the booklet, read the single line opening prayer, open the Bible to the selected lectionary verse, etc.

But I’m an insomniac who began my sleep-deprived days with a quick shower and breakfast eaten while commuting. I tossed the tiny booklets with their small font and facile prose in the recycling, unread.

By the early 2000s I was writing poetry, prayers, and meditations for my congregation and denomination. Finally, in the act of writing itself, I had found a form of spiritual discipline. I never woke at dawn, but I remained faithful to the practice.

Though I was adept at writing the devotional formula, it quickly began to feel constrictive. I wanted to read outside the “inspirational” genre. I began to hunger for risky, authentic, platitude-free writing that could inspire my own clumsy efforts.

I shared my longing with an artist-painter-pastor who recommended Image.

Reading the journal, I noted a back cover ad about the formation of a low-residency MFA program for writers who “care deeply about faith and literature.”

Five years later, as a new student in that MFA program, I heard about Good Letters for the first time. I launched Image’s website and read this introduction:

For the humanists of the Renaissance, literature mattered because it was concrete and experiential—it grounded ideas in people’s lives. Their name for this kind of writing was bonae litterae, a phrase we’ve borrowed as the title for Image’s blog. Every weekday, one of the gifted writers on our blogging team will offer a personal essay that makes a fresh connection between the world of faith and the world of daily life, spanning the gap between theology and experience and giving language a human shape.

In a culture where words are too often divisive, here was a forum for personal vulnerability and thoughtful, respectful engagement with politics and theology across differences.

This was the daily devotional I was looking for.

During my final MFA residency in 2011, which ran concurrently with The Glen Workshop in Santa Fe, I boarded a bus headed to a thank-you reception for donors and friends of Image aware that, other than my oft-lapsed subscription, I’d contributed nothing.

But with each conversation that evening, I became increasingly aware that Image was—and is—more than a quarterly journal, a daily blog post, a weekly e-newsletter, an annual workshop, and the impetus for an MFA program.

It’s a community whose reach is wide, one that sees beyond divisive labels, that provides an oasis for honest, edgy artistic expression.

Image even welcomes interlopers like me, who crash a party for free snacks, but leave convicted of somehow, someday becoming a true friend.

That fall my husband and I bought a fixer-upper 900 miles from our California home of twenty-five years where we didn’t know a soul, but Image beckoned across Puget Sound in Seattle.

I emailed Image’s founder Greg Wolfe. “I’m moving your way, how can I help?”

His reply: “How about editing Good Letters?”

For over four years (one which I job-shared with Jan Vallone), I’ve had the privilege of being the first reader for each of our regular contributor’s posts.

During that time I’ve lived in three towns, a home-renovating nomad with one constant in my life besides my husband: Good Letters.

These bloggers, who I’ve never met in person, are my scattered community. My close attention to each word they’ve so carefully written is my daily devotion: Editing as lectio divina.

Caroline Langston, A.G. Harmon, and Peggy Rosenthal have written for Good Letters since it debuted in February 2008. A.G. and Peggy have penned almost 170 posts each, with Peggy also introducing twenty-two poems for the year-old feature “Poetry Fridays.” Caroline, who lost count after a hundred entries, writes of life in the South, the District of Columbia, and Eastern Orthodoxy.

I could go on cataloging this abundance which is offered daily, and free of charge on both Image’s website and Patheos.com.

Each essay itself is a gift from its author, who receives no compensation (other than compliments from readers and heartfelt thanks from Image’s small staff) for his or her efforts. Producing Good Letters takes countless hours and a huge commitment from the volunteers who make it happen—writers, publisher, editor, marketing associate, and interns.

Why this devotion? Because once we find ourselves welcomed into Image’s expansive domain, we discover in its programs and publications something rare and beautiful, something that deserves the widest possible audience and participation.

Image nourishes and befriends us and we respond in kind. Join us by becoming a friend of Image today.