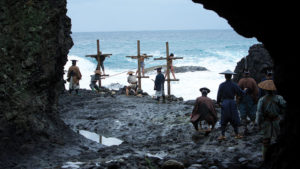 It’s been nearly a month since I finally saw Scorsese’s Silence, and what I remember most is the cry of cicadas and how crucial sound is to the film’s translation of Shūsaku Endō’s novel. The cicadas’ song is loud, and in Silence, they sound a sorrowful note.

We hear the cicadas and the crickets before we see anything onscreen. When the title screen appears, there is an abrupt cut to silence. The cue is helpful because we’ve learned to ignore most sounds, let alone nature’s song. Scorsese has much for us to see, but we’d better listen, too, or we may miss everything.

In any film there is a relationship between sound and silence. In Scorsese’s film the relationship is fundamentally theological: Does God speak?

The question is old, but in certain times and places God’s apparent silence seems deafening. My sense is that in America—in a culture where incessant distraction and consumption tramples the habit of being attuned to the cosmos—ours is a time when it’s easy to come to consider God silent.

One ancient way of thinking is that creation is God’s speech, and as such all things are filled with his presence. From this vantage point, image and sound are inextricable. God speaks that we might see, if only our eyes and ears are open.

Like sound, images have rhythm. In long stretches of Silence, especially when Fathers Rodrigues and Garupe reach Japan, it’s a slow encroachment. In traditional “God’s-eye-view” shots, the Fathers get lost amidst the tall grass; in extreme long shots, the locals are barely visible against the looming landscape; with regularity, the ocean persists against the screen space. The total effect encourages contemplation of both distance and danger. In this visual space, the viewer enters a kind of silence where nature’s potential for brutality is accented.

Persecution of professing Christians involves nature’s elements—usually fire or water. Crucifixion happens on the beach where the tide drowns them, their suffering bodies barely visible. Then their bodies are cremated on a funeral pyre in refusal of Christian burial. In the quest to obscure their bodies, the Inquisitor aims to silence the professing Christians. To step on the fumi-e is to trample Christ’s carved body; resistance requires that it be stamped out of their bodies. The Inquisitor aims to have the final word.

In the midst of brutal suffering and evil, God’s speech becomes a question of theodicy. If to be human is to live a life that effectively talks back, we sometimes throw up our hands at God for bringing us into conversation, not only with him, but with others.

God gives the Word, but some moments we’re left to wonder: Is there a logos for this?

Again and again, Silence pours forth the diegetic sound of the cicadas and the crickets.

Not long after Father Rodrigues reaches the village of Tomogi, the secret Christians notice his crucifix. In extreme close-up, the cross passes from hand to hand. The cicadas’ and crickets’ loudness increases, slowly isolated to a single cricket’s chirping. Image and sound coordinate to convey intimate presence.

Silence features the traditional sense of the sacramental, too. Father Rodrigues performs the sacrament of baptism for an infant in the village. At the water’s contact, the child flinches as if in pain. The image recalls the film’s opening scene when Father Ferrera, who we come to find out has apostatized, watches in anguish as ladles of scalding spring water slowly pour over the professing Christians’ heads.

A logos of the cross emerges: These sacramental moments disclose the voice of a God who suffers alongside the suffering, even in their very bodies.

If God speaks in these ways, it doesn’t redeem Rodrigues so much as it means his Christian mission is a genuinely conversational encounter where wisdom is not one-sided.

In an interview, Kim Allen Kluge and Kathryn Kluge—the husband and wife who composed the film’s score—wrote that they needed to create “a new Shinto music” composed with nature’s sounds. They drew inspiration from the text, where they noticed the repeated mention of the cicadas. They read them as the voice of God, but also say that Rodrigues “couldn’t hear it.”

Instead, Rodrigues worries that the Japanese Christians are too desirous of “tangible signs.” Later, Ferrera discounts their faith because to them the Son of God rises each day when the sun rises. With good reason Christians maintain that God’s immanence is inextricable from his transcendence. Yet, while these Japanese Christians may not fully appreciate God’s distinction from creation, perhaps a culture steeped in a highly animistic Shinto tradition intuits something about the presence of God—about his voice—that we in the West may be apt to miss.

Once the contest of wills between the Inquisitor and Rodrigues begins, I’m frankly not sure whether the cicadas and crickets grow quieter or totally quiet. I don’t want to know because such is the effect of some sounds: They stay with us even when all goes silent.

After Rodrigues tramples and seems to hear the audible voice of Christ (perhaps because he couldn’t hear him otherwise), Scorsese cuts to a medium shot of Rodrigues a year later, and the sound of the cicadas is the loudest yet. Rodrigues has a contemplative look, as if he’s interiorized something he’d not known. Later, he reflects, “Everything I knew, everything I’ve done, speaks of Him. It was in the silence that I heard your voice.”

Difficult questions remain, including the mystery of the cross.

Don’t miss some of the subtleties of Scorsese’s final shot, perhaps a revised God’s-eye-view of what is hidden to everyone in the film’s world: Rodrigues has kept the handmade crucifix given to him by his fellow Japanese. The iconography of the scene is that in some sense it is their martyrdom and their insight that helped sustain Rodrigues’s faith until his end.

After the final image, all goes dark; we hear the cicadas’ song again.