THIS IS THE BEGINNING.
A single mark is applied to a surface. This primitive action makes up the elemental condition of the act of painting, and nothing can substitute for it, neither idea nor concept. It is by this first mark, belonging to the world of the visible, that the inanimate substances of paint and surface are realized as the quintessence of painting.
Without it, painting does not exist.

Painting is a process.

It is a thickening of the visible that is agitated by the ongoing appearance of forms, lines, and shapes. Every mark that appears is not so much in addition to but in fundamental transformation of all the preceding ones.

As the process continues, the tension between painter and painting increases. Materials have their stubborn qualities, the composition its own logic. Like a parent bringing up a child, the painter must avoid imposing his own vision on the empty canvas and come to terms with guiding a living organism that has a mind of its own. 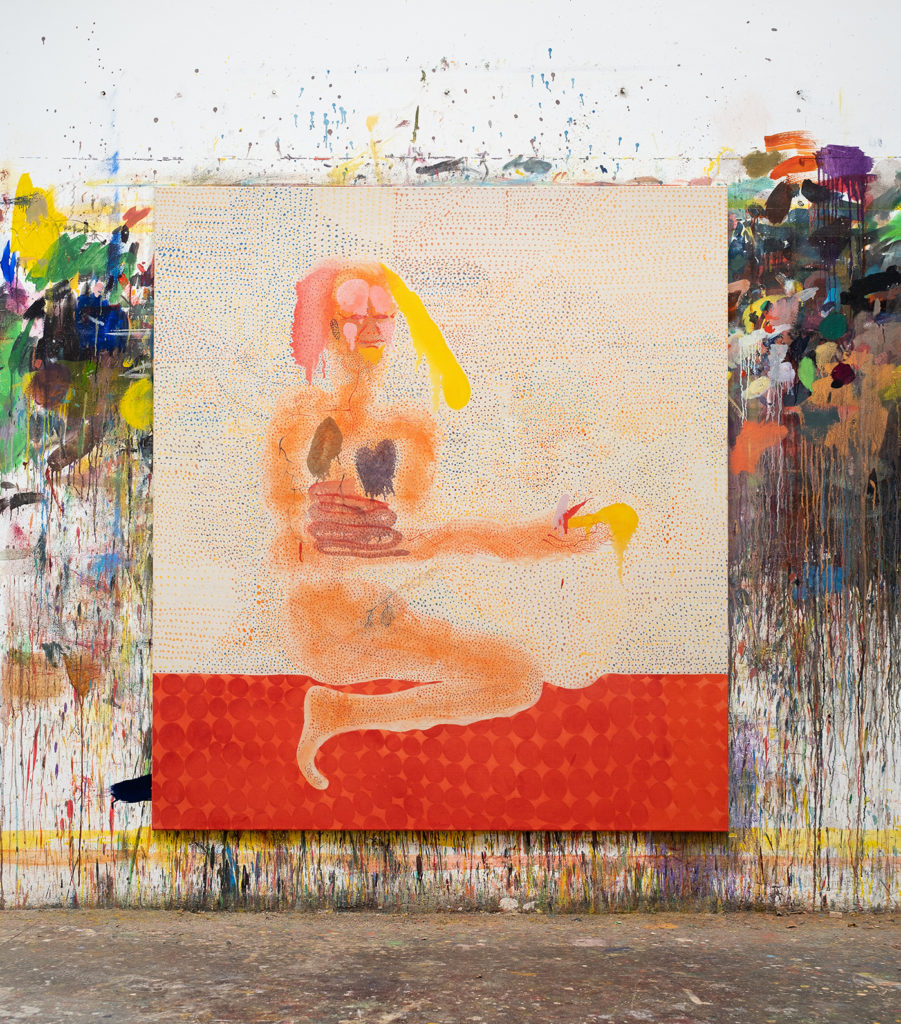 There is also tension between a painting and the picture it generates: A picture tends to compress the very complexity a painting attempts to preserve. It finalizes and solidifies the medium’s natural continuity, ossifying the openness of the pigments suspended in slow-drying oil.

Of course, this is the source of our fascination with pictures: They simplify our human experience and give us a sense of closure about areas of life that are in reality too fluid to grasp. Paintings, on the other hand, pierce through the superficial ideas we have of ourselves and the world around us. They unsettle us, and by that unsettling, bring us face to face with the truly porous nature of our identities and lives.

Art in one sense dispossesses us of our habitual perception and restores to reality a dimension that necessarily escapes our conceptuality and our control. It makes the world strange.

The distinction between a painting and its picture allows the pragmatic questions of process to come to the fore: How much can I darken an area of the canvas and still preserve the necessary contrast? How do I integrate the irritation of an accident into the overall composition? Rarely do I get a clear sense of what the painting might be like as a coherent structure. It feels as impossible as piecing together sequences of a dream.

While certain details come into focus, others grow more opaque. The harder I look, the more my gaze loses itself in the thickening of layers, textures, and disappearing familiarity. By sacrificing the certainty of the picture, I may truthfully engage the uncertain terrain of painting. 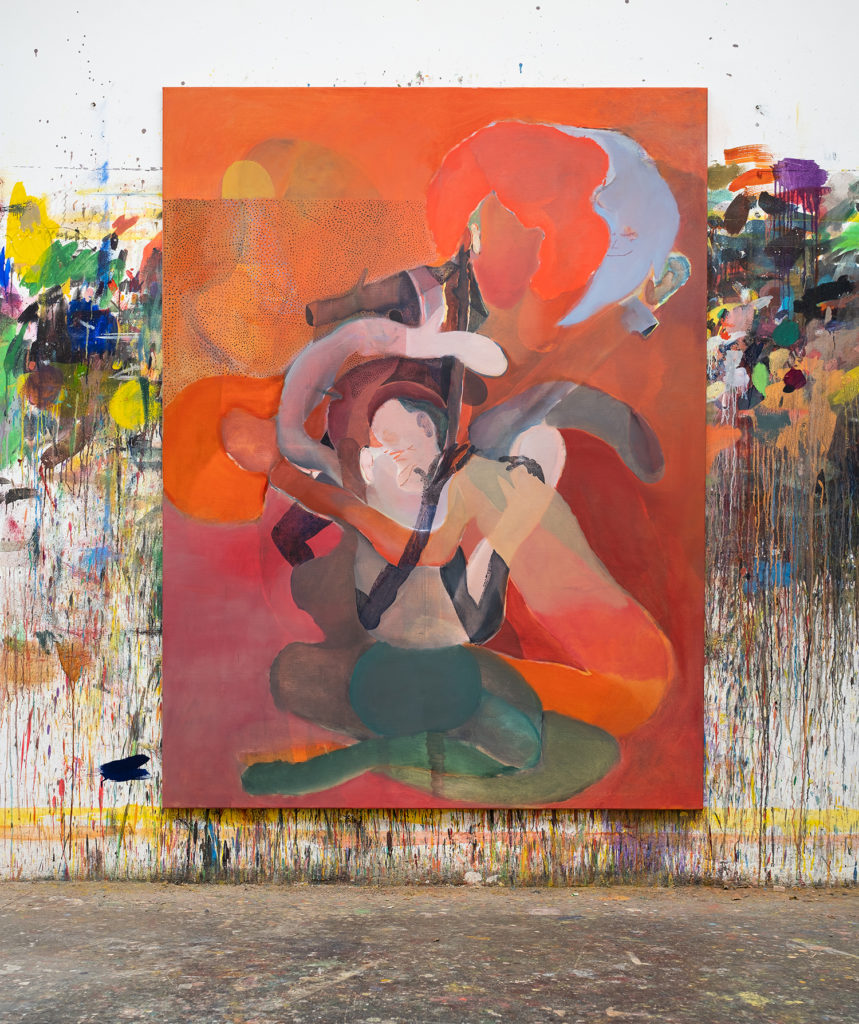 Painting should be seen in the flesh.

Reproductions give us an idea of the work but not a physical encounter. The encounter begins with realizing that painting always escapes our cognitive grasp. It reveals itself to our senses rather than our thinking and ignores our obsessive need to understand. The presence of form and color in all their rawness undercuts all our theories as we try to sidestep actually being in front of the work.

As words fail us, there remains a real sense of hospitality in great painting. It offers itself to the gaze of strangers and opens up space to experience the unexplainable.

I once had a wonderful experience with a friend in front of Jan Vermeer’s Allegory of Painting (1668). The encounter was so rich and dense that it required us to linger, mostly in silence, for several hours as the painting unveiled layers of possible readings and material facets. Nothing in this work was imposed on us. Rather, it invited our gaze to plant itself into the thicket of the visible. What intrigued me was how the painting supported our growing awareness and interaction with it. It did not let itself be distorted to meet our needs as observers.

If I were to visit the work again, I doubt I would experience it the same way. Moments like these are both highly subjective and frustratingly unrepeatable. For all the meaning and beauty that art weaves into our lives, it is almost impossible to pinpoint its source or grasp it directly.

Painting is a spectacle of the visible.

This spectacle, however, cannot be forced. It is not a painterly effect that can be removed if unwanted. Should it show up, the painter usually cannot explain why and struggles to recreate it. Approach it directly and it refuses to appear. Everything worthwhile in painting comes in the form of a fragile moment; when contrived, it hardens and is lost. The painter must humble his gaze and redirect it to the unspectacular tasks of his vocation. For it is the unspectacular which allows the spectacle to take place.

Painting is a struggle with the material, not the pictorial. The painter is constantly in danger of resorting to illusions, visual tricks, or clichés. He wrongly assumes that by making a picture he can resolve the tensions of his material. It does not matter if the picture is abstract or figurative; it is devoid of spectacle and sustained only by the injection of meaning, concept, or narrative. 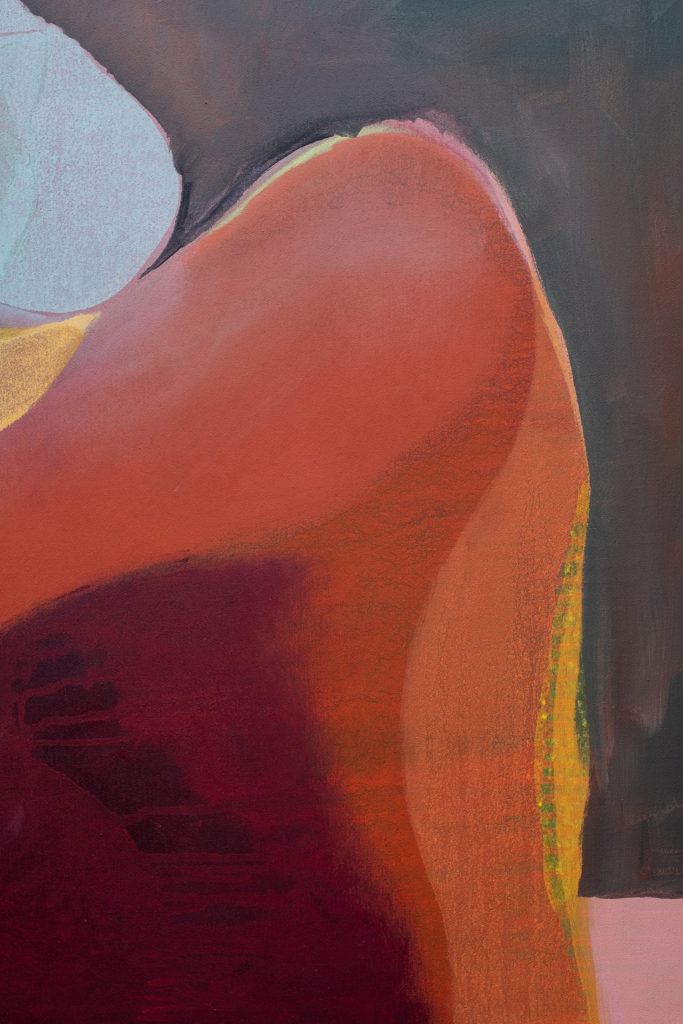 Liberated from the picture, it embeds itself deeper into the material and grows more obscure. This immersion begins anew in every painting and offers the painter an opportunity to familiarize himself with the nature of the medium: the blurriness of new shapes, the resistance of materials, the paradox of accidents and fertile insecurities. Maturation comes not through any lucidity of these workings (they are anything but lucid) but eventually appears as a deeper sensitivity and trust towards the undercurrents of a pictureless practice.

The painter works from a point of anticipation.

He is attentive to that which is still unseen. Navigating by intuition, he ventures into the thicket of the invisible, the primordial state of his material, to gather what he finds into a bundle of form and color. This newly found visible, the essence of painting, does not immediately make sense. It interrupts the progress by refusing to smoothly integrate itself into the composition. But it is precisely as a moment of irritation, rather than relief, that anything original asserts itself.

I have a desire to put paint on. That I know. There’s a surface in front of me. I think, “Well, I’ll just start from scratch, I’ll put brush in paint, I’ll put it on the canvas.”

A continuous layering of paint in varying states of fluidity can transfigure the entire composition. There is neither addition nor subtraction but only the economy of forms: this shape or color replacing that shape or color. 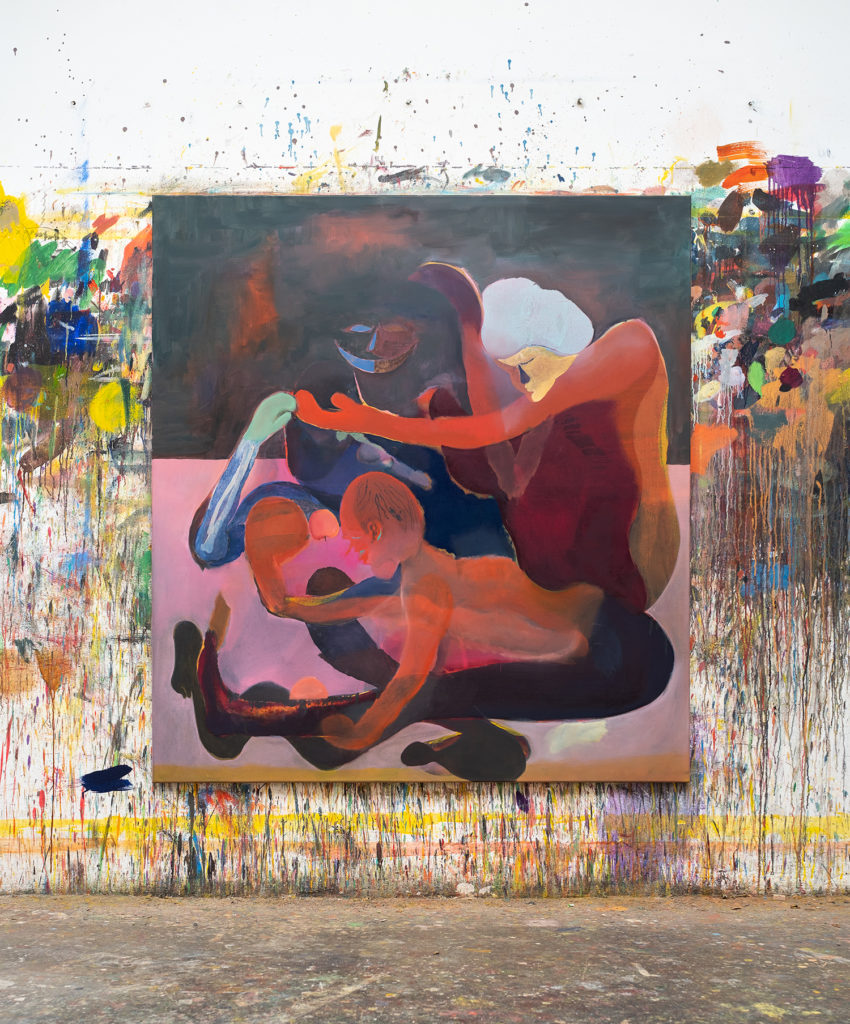 There is no neutral surface. Even a blank canvas is already loaded with possibilities, pictures, and ideas waiting to be actualized. The activity of painting steadily reduces those ideal possibilities to their material reality: a cluster of marks and the surface supporting them. Each intervention substantially transforms the painting and will either dilute or thicken the visible. It is the correspondence between the markings and their antecedents that sustains the phenomenon of painting—turning the pure potential of the painter’s materials into the something on the canvas that may become more than the sum of its parts.

There is no invention in painting, no true creation.
There is an unfolding and unveiling of color and form.
There is a reshaping of the raw and inanimate material of paint.
There is the thickening of the visible.

Thickening most often resembles a mistake: the imperfections of a line, the ineffectiveness of a shape, the failure of an attempted correction. It requires surrendering the idea of the picture to the process of painting. The lack of overview creates an intimacy that begins to activate the material. Areas that most annoy the painter are probably the ones where the visible is most alive.

This fate of the painter is not the fate of the viewer, who is invited to wander through this cultivated chaos of new shapes. To truly gaze at a painting is to turn over one’s sight to a particular visible reality, one that produces our seeing as much as it is predicated on it. This gaze recreates our perception, drawing us into a space of density and thickening. It is a balancing act between the visible and the invisible that must be contemplated with expectation.

Painting is a spectacle of presence, a careful unfolding of the unseen that ordains the clearing in the thicket in which form, line, and color not only appear, but emulsify. There are no longer any parts of the painting that can be separated from each other or the surface. Nothing can be removed or added without threatening the integrity of the new visible.

If a painting is worth experiencing at all, it must be affirmed as this emulsion, which reveals itself only to the attentive gaze, though a glance might be the first encounter.

Often painting fails.
It fails us as painters and we fail it as viewers.
But failure has a habit of shaping
its own poetic spaces:
a new beginning. 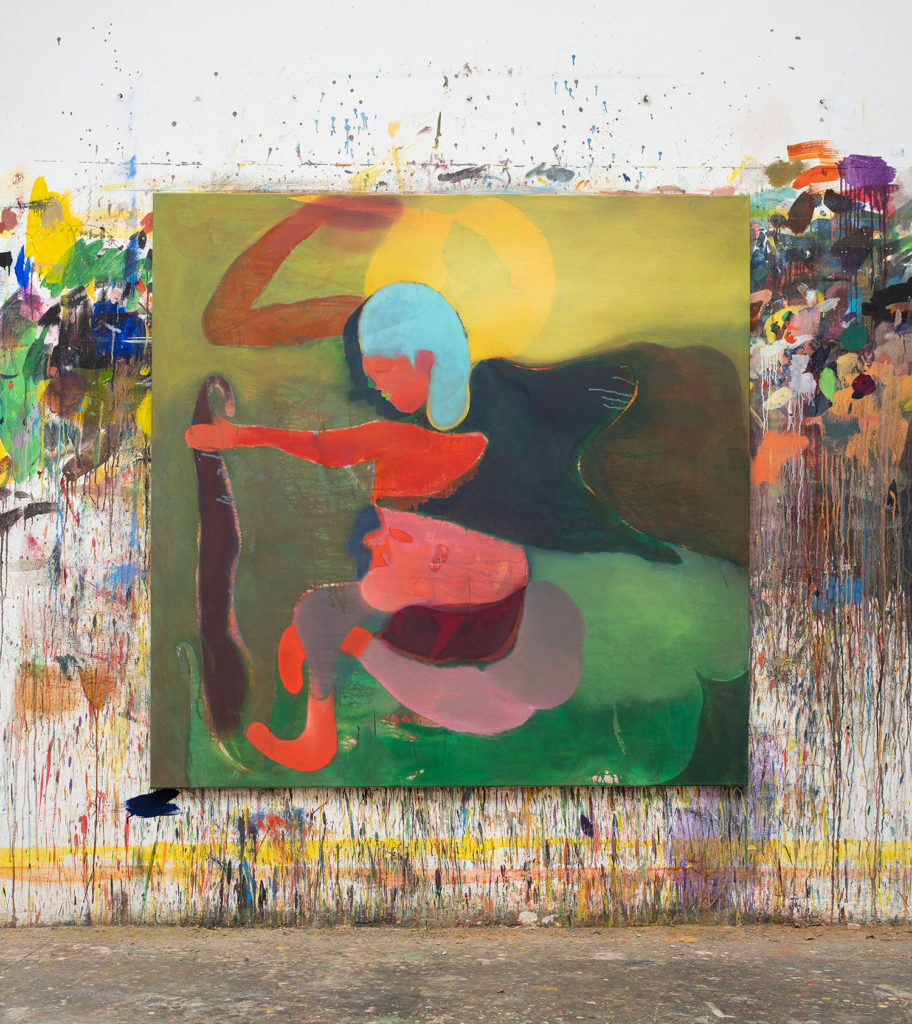