WE CAME FOR THE BLUES AND REDS, the angels and animals, the Jewish Jesus and the Bible’s drama cascading across canvases. We came for ethereal whimsy that doesn’t shy from horrors. We came to the Chagall Museum in Nice expecting to be entranced again by the painter’s vivid, cosmic faith. Little did I realize I’d be arrested by a video screen, my gaze commandeered by an artist I’d never heard of.

While the swirling colors of Chagall’s Bible cycle called from the main gallery, somehow we were first drawn to a contemporary exhibit to the left. Perhaps it was the flickering light, or the title: “From the Profane to the Sacred.” We stepped inside.

When visiting a museum or gallery, I think studiousness can be a vice. Too much diligence—earnestly following the sequence laid out by the curators, studying each label, expecting every work to be significant—can protect us from actual aesthetic exposure. Sometimes playing the connoisseur, with its haughty dismissal of sentimentalism, insulates us from being moved, changed, perhaps even called by a work of art. And so, perhaps heretically, I’m an advocate of roaming, of unburdened wandering the gallery, as a practice of attentive availability. My pilgrimage through a museum is a contemplative glide. Alert but promiscuous in my looking, I refuse to be held down until I encounter a work that holds my gaze. I’m waiting for that strange experience when a picture speaks, sometimes in a whisper, sometimes with a shout, sometimes with a reverberating silence that pulls me to the edge of a precipice where I’m not sure whether I’ll fall or fly.

This was my experience in Nice. As we tentatively enter, my gaze casts about the long gallery and is immediately pulled to a video screen mounted on the wall. It is dark but undulating, as if a machine could breathe. As I inch closer, already mesmerized, I sense a pulsing and begin to hear harsh reverberations and what sounds like a worrisome scream. I am watching a film of I know not what. The frame and distance of the shot make the image abstract; there’s a sense of watching a crowd, but individuals are lost in what is now one organism—a dark, throbbing, thrumming beast.

Tiny lights begin to emerge, a few, then a wash of them, as if a thousand eyes have blinked open. A strobing flash illumines the dark with its own pulse, a light greater than these lights. A rhythmic clapping erupts, hungry, as if the beast awaits a sacrifice it can taste. And then subtitles appear. They have an ominous, apocalyptic feel: Let the Archangel now, the dangerous one, from behind the stars, take a single step down and toward us: our own heart, beating on high would beat us down. And then the screen fades to black.

Only to come to life again. The film is a loop. Unsure what I’ve seen, I stay. Again. Again. Squinting and scrutinizing, I think we’re at a concert; the invisible heavy-metal band is breathing life into their instruments, their screech baleful. The crowd throbs in anticipation. The blinking eyes, I now see, are a thousand cell phones. The film has excerpted and framed this spectacle in such a way that we feel its ritual nature, the collective surge of devotion. Screening this in the vicinity of Chagall’s Bible cycle, where pilgrims bring a certain kind of expectation, means this short film is encountered with spiritual antennae up. Viewers are primed to sense the ritual and feel the yearning of this multitude.

When I finally glance at the museum label, I learn the work is called Élégies, by Clément Cogitore. And those eerie subtitles are lines from Rilke’s Duino Elegies, “like the inner voice of an invisible narrator,” the artist suggests. These contextual insights only deepen the forbidding spiritual energy I first sensed—these lights alongside Chagall’s stars, this archangel in communion with Chagall’s heavenly messengers.

I recalled this experience while reading Rita Felski’s fascinating new book, Hooked: Art and Attachment. Calling into question the ideal (and illusion) of a disinterested spectator or a dispassionate critic, Felski argues for an art appreciation that makes room for affect without devolving into sentimentalism. “Any case for art,” she says, “cannot brush aside the salience of first-person response; it is via such response that artworks come to matter, to make claims upon us.” Drawing on actor-network theory—a theoretical frame in which things are seen as “actors” precisely because they shape us, affect us—Felski grants an agency to artworks. These creations are creatures that do something to us. “We need to do justice to what the artwork does. The poem intervenes; the painting arrests a nonchalant viewer; the movie makes something happen.”

This honors the mystery of how such creations surprise us, claim us, unexpectedly affect us—sometimes with a new devotion we can hardly explain; sometimes with a sense of foreboding we can’t shake; sometimes with a melancholy that pierces our numbness. These are the works of art that get under our skin, that we carry—yes, let’s risk saying it—in our hearts.

A work like this forges a tie, an attachment, and the realization of such a connection is, in a sense, essential to the art. “Artworks must be activated,” Felski says. “We make the artwork even as it makes us.” So rather than being embarrassed about this subjectivity, we should own and celebrate that an artwork finds its end, even its completion, in our subjective experience. Jane Austen only comes to life in you. 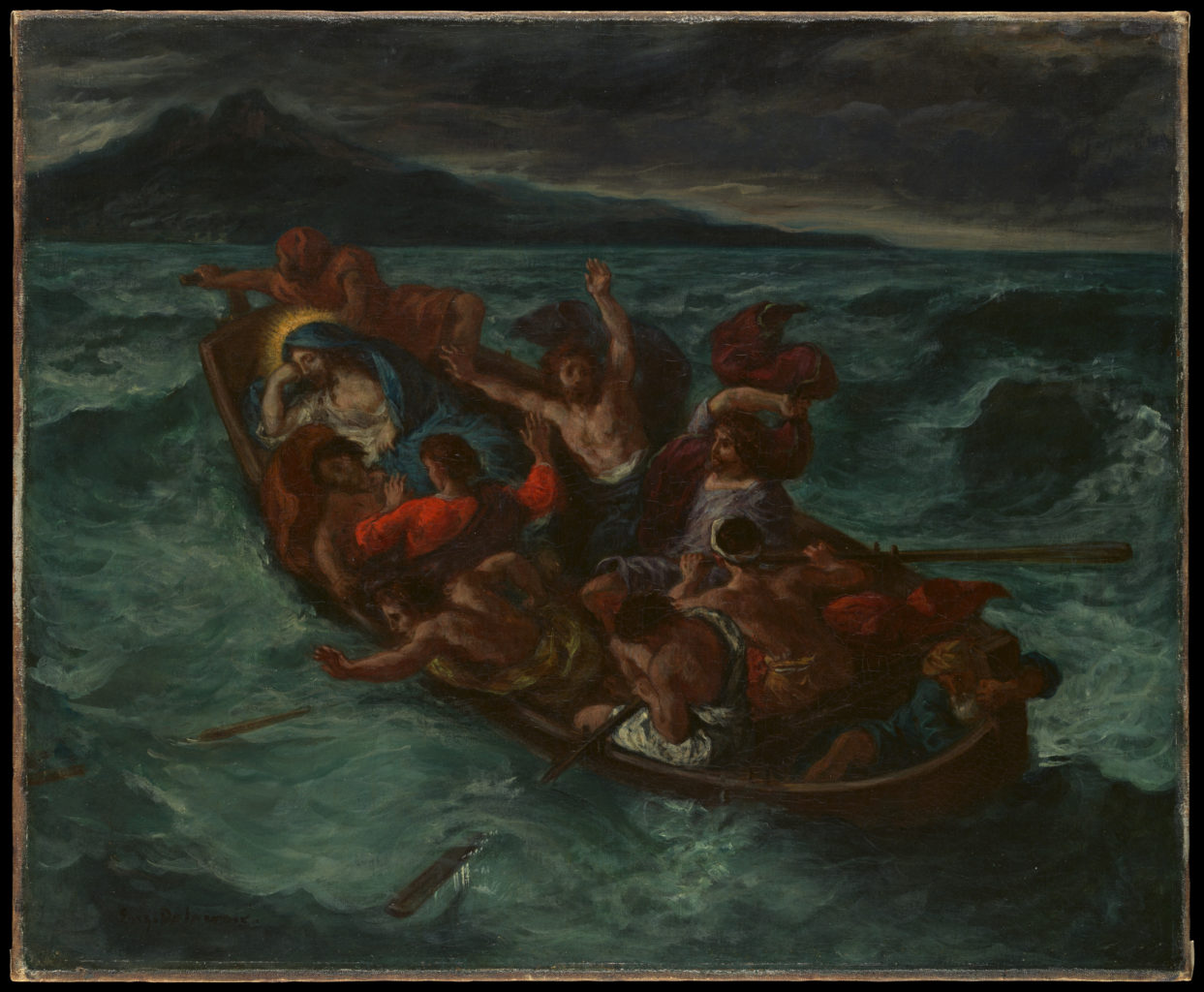 Eugène Delacroix, Christ Asleep during the Tempest, 1853. On view at The Met Fifth Avenue in Gallery 801.

Felski highlights the deep contingency of these experiences, their temporal peculiarity, the mystery of why this work affects me (and not you) at this point in time. Surprising attachments can emerge. What happened, for example, on the day I visited the Met, coasting through galleries I’d seen before, to suddenly make the roiling teal of Delacroix’s sea pull me into the boat with Christ Asleep in the Tempest? What changed, except something in me, around me? Maybe I had to be in the storm for this painting to speak. Like reading The Plague in a pandemic, or listening to Bruce Springsteen in your fifties. James Elkins has written an entire history of people who have cried in front of paintings.

There’s an inexplicability to this that eludes even our own understanding. I may read a poem that everyone agrees is moving, but for me it’s lifeless; then a poem in the corner of a magazine grabs me by the collar, and I can never see the world the same way again. This mystery, of course, is also why we share our enthusiasms cautiously. We know the vulnerability of claiming such ties to artworks, because what we can’t explain ourselves is often not shared either. I don’t want to hear your critical, knowing take on Wallace Stegner’s Crossing to Safety because I don’t need you elbowing your way into a relationship I share with my wife and our best friends. Every artistic affection harbors secrets.

And there’s often a hint of possessiveness about such mysterious connections: I want to keep this artwork for myself, a private affair. There can be an exclusivity to the intimacy of this attachment. Not even I understand this relationship, and I don’t want to risk losing it by sharing it.

The possibility of being surprised, hooked, so to speak, requires the cultivation of a certain kind of availability. There’s an irony to this: I need to make choices that make it possible, once in a while, for my will and intellect to be bowled over, overwhelmed by an arrival that grabs hold of me. In other words, once I’ve purposely journeyed into unknown territory, sometimes I need to put down the guidebook and simply drift. There might be long seasons of incubation that feel like walking through the same gallery over and over again, unaffected. But that is the discipline of aesthetic availability: training for surprise.

It is this necessary cultivation for surprise that is undermined by the cliché. The arts in the vicinity of faith seem especially prone to give us what we already love, to keep returning to tropes that are familiar, hence comforting. This is how to make the world smaller, shrinking it to the size of what I’ve come looking for, what I’ve come to expect. The comfort of the cliché is a buffer against surprise.

Felski is attentive to those attachments that take me unawares—aesthetic experiences I didn’t go looking for that burrow their way most deeply into my psyche. Those are only possible if I am cultivating a way of life that puts me in front of artworks that don’t conform to my preferences. That might mean signing up for the disciplines of an aesthetic way of life in which I am puzzled or frustrated or decentered by the feeling of “not getting it.” It means approaching paintings and poems without expecting immediate returns. In my experience, the way of surprise lies in listening to a community of friends bear witness to what has captivated them and letting my puzzlement be an impetus to explore new territory. When Shane McCrae gushes about a poet who has felt inaccessible to me, I assume I have something to learn. And so I taste and see. A life hungry for aesthetic surprise does not settle for daily doses of predictably poignant comfort; instead, I need to expose my palate to strange, maybe even unsavory tastes as a way of making myself available for the sublime. While we can’t manufacture the surprise, we can learn to make ourselves available.

It’s the ambient music that makes it possible for me to hear something I’ve never heard before, even if this playlist has been looping in my study for three years. The beauty of contingency, I think, is a feature of time’s flow and unfurling. The affecting encounter is a crystallization of possibilities built up over time, and only possible because of the unique history I bring to the work of art here, now. Granted, there’s an objective force to works of art that can do this. It’s no accident that Bach and Cézanne hook so many. The mystery is what it takes for them to hook me. What did I have to go through for the epiphany to dawn, for the artwork to arrest me, unsettle me?

Would Cogitore’s Élégies have affected me in the same way if I weren’t already familiar with Chagall? That prior exposure led us to make this pilgrimage; and all the Chagall dancing in my head primed me to enter that museum expecting an experience that would verge on the religious. But like truth that comes slant, somehow that was preparation for an encounter I never planned—and one I can’t shake, now part of what I bring with me to the next.