Image: Do you have any ritual as part of your practice, either before you begin working or as you paint?

Barbara Takenaga: Unfortunately not—no yoga warm-ups or mind-clearing exercises. I rarely make preliminary drawings, except an occasional doodle. Because the process begins with random pours of paint in a kind of faux abstract expressionist process—tipping the canvas, flinging paint, all of those historical dance moves—the image is determined by how the paint dries. I guess that could be the ritual, actually.

Image: Your paintings often seem to have a cosmic force whirling, flowing, or bursting through them. Is that there from the start, or does it pick up momentum as you paint?

BT: I like that description. In some ways, it’s the nature of the paint itself, without me doing much to encourage the outcome. Liquid paint tends to pool or drag as it dries. It’s a wonderful micro view of bigger forces—gravity, momentum, natural patterning. When I start working with brushes, I often just follow the direction of the paint in a kind of collaboration. But I must have a pull toward that kind of cosmic imagery, because it keeps emerging. 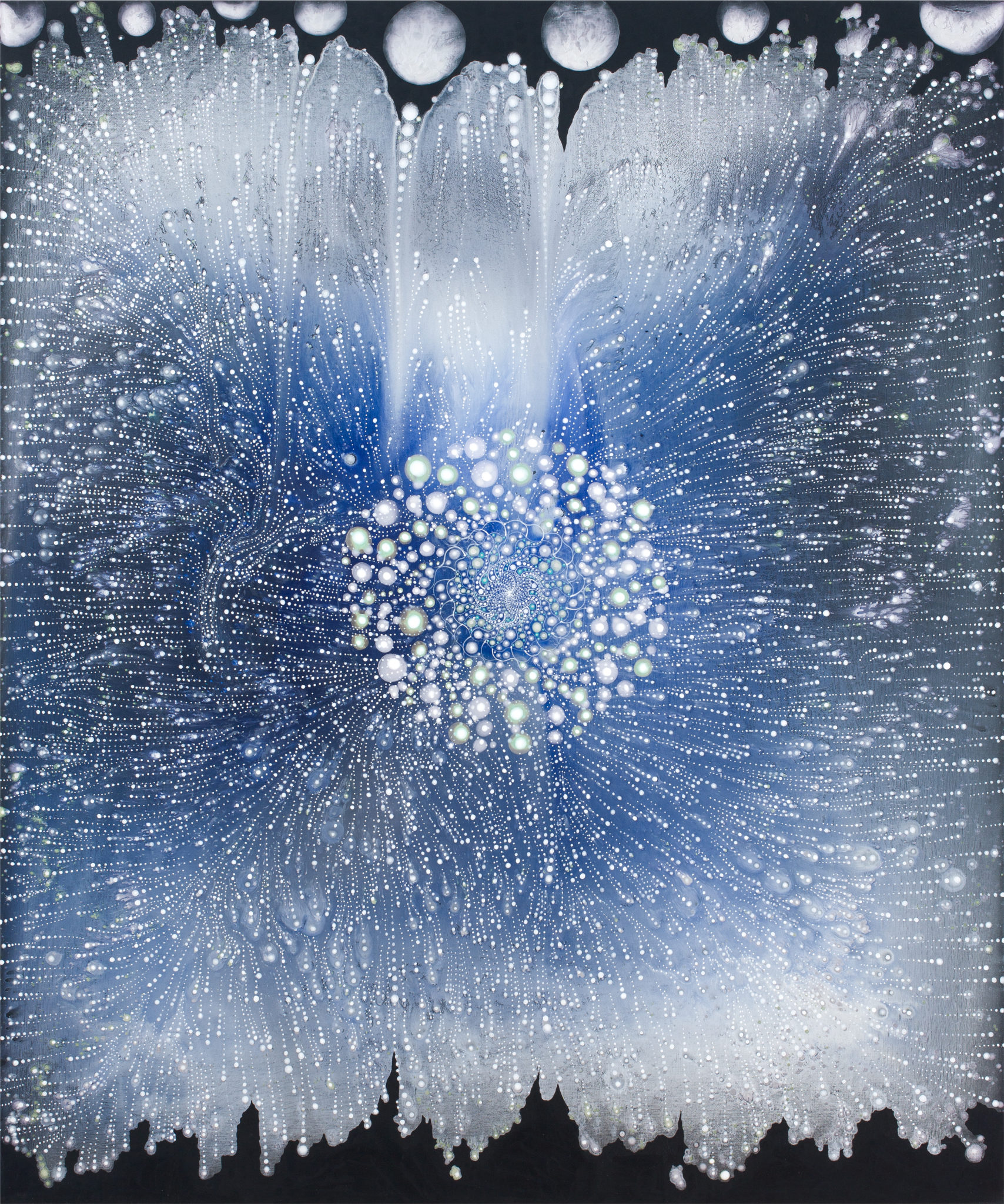 Image: What forms have you created on canvas that have most surprised you?

BT: Although I’m a bit of a control freak, I want to incorporate more randomness. So I often have to problem-solve images that are outside my comfort zone. Sometimes the underlying image is so blatant and awkward that I just have to give in and go with it. Those difficult ones, the ones that I have to wrestle with, are often the most surprising and rewarding.

Image: Some of your works remind me of the heavenly patterns in the ceilings of religious spaces from the Dome of the Rock to Saint Peter’s Basilica. If you could imagine your works filling a vast space, whether a ceiling or a wall, where would that be and what might it look like?

BT: That’s a lovely idea and a really difficult question. Religious spaces have such beauty and presence, from the intention of the architecture, but also from usage. Who wouldn’t love to have an immersive, monumental work in such a contemplative space? Ceiling and wall! It’s an egomaniac’s desire, impossibly alluring. 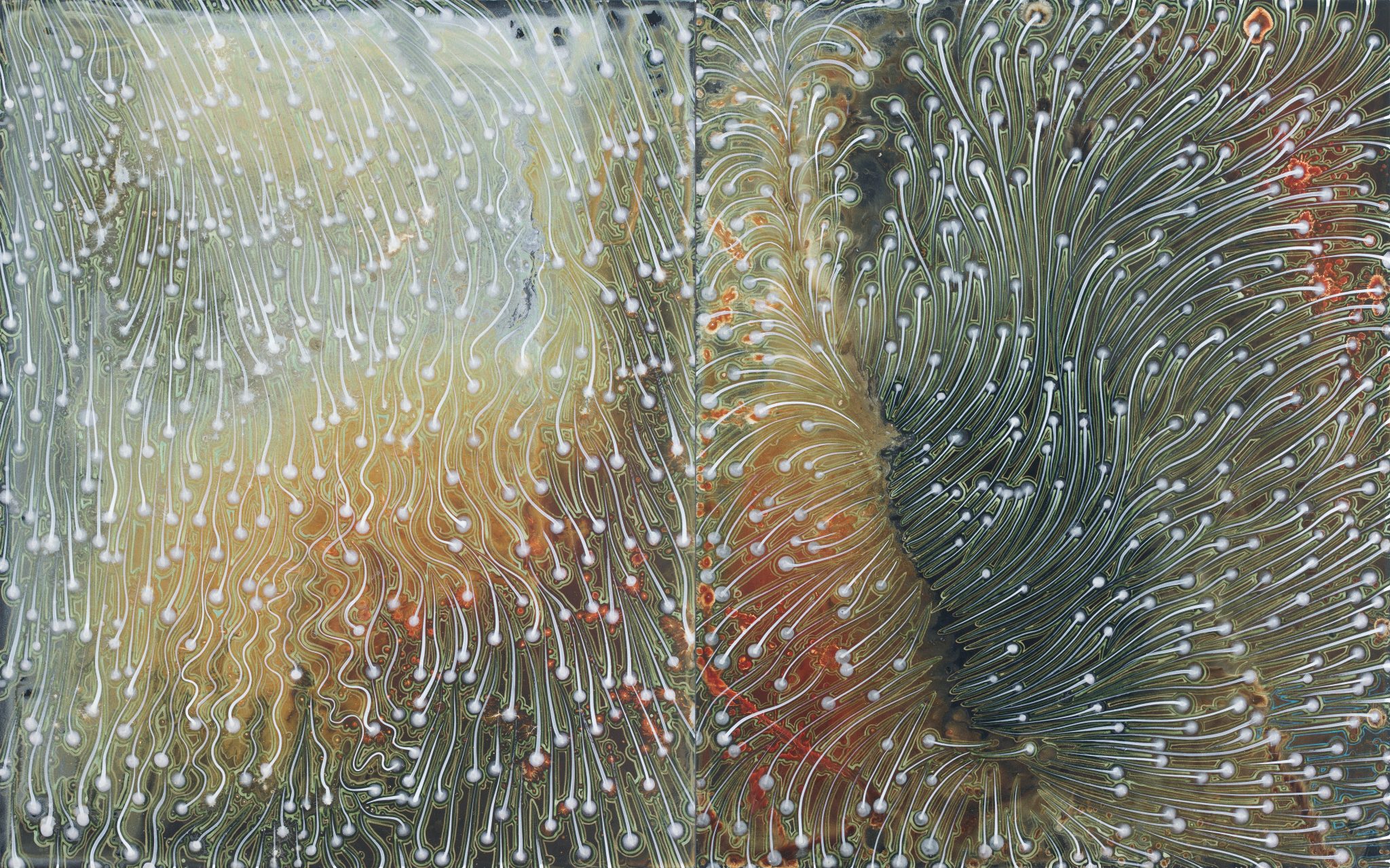 Image: There are a lot of ways to look at your works, not just interpretatively but visually. One could begin at the center or the perimeter, for example, or look into their space or dwell on their surface. Do you imagine viewers looking in a certain way when you paint? Have you learned any optic strategies from your viewers over the years?

BT: This question is actually at the center of the work. I like the idea of possibility—that the painting can carry multiple readings. It’s like standing in the middle, at a still point, the old idea of reconciliation of opposites. I like to think of “visual tolerance”: An image can be a cloud or a spaceship or a giant head. Missiles or falling stars. Cells or galaxies or bullet holes. I also started using iridescent paint. I love how it changes color with different kinds of light—it’s a different image in the morning than in the evening. Or the color shifts as the viewer moves position. The painting has a little life of its own. It interacts and is not static. 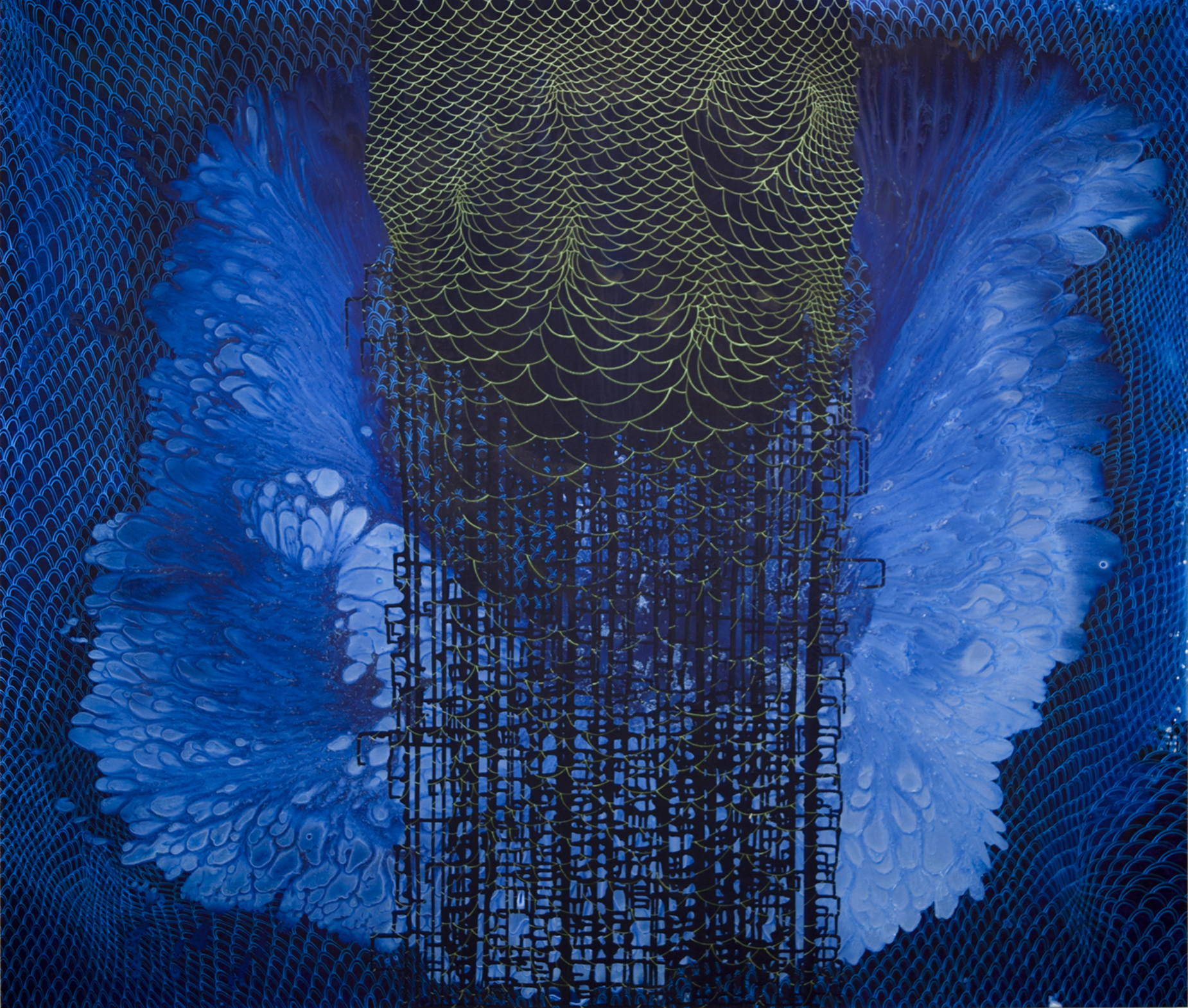 Image: How have the strange events of this year impacted your work, whether explicitly or more subtly?

BT: 2020 has been a bounty of horrors. But I know that for a lot of artists, the quarantine meant hunkering down in the studio with not much else to do but work and wash our groceries and sanitize our keys. That was a small upside, all that concentrated studio time. No doubt the events of this year—pandemic, awful, divisive politics, wildfires, climate change, the beloved RBG leaving this world, as well as the examination of racism in our culture brought on by the Black Lives Matter movement—have had a big impact on my work. How could they not? But I’m still in the midst of it and myopic. I’m hoping 2021 is, as my father would say, more better.

Barbara Takenaga is an abstract painter working in New York City. A 2020 recipient of a Guggenheim Fellowship, she is represented by DC Moore Gallery. A twenty-year survey of her work at the Williams College Museum of Art was published by Delmonico|Prestel in 2017.