THERE ARE MANY WAYS to enact violence, and the drawing was one of the most violent things I’ve done.

A vase occupies the lower and middle foreground. It rests on a small foot, and immediately above it the vase’s bottom curves upward in lines that narrow at the neck, fluting subtly at the opening. The light draping the vase’s right side, and particularly the light at its lip, employ the white of the paper; where the light appears strongest, the pencil hasn’t touched the paper.

The carnation’s stem rises from the vase’s narrow opening with a slight lean to the right. The single visible leaf leans to the left, and the opposing directions of stem and leaf create a density of perpendicular angles and intersecting arcs. The human eye moves instinctively to convergent points, and the shapes of leaf and low petals jar against the smoothness of the vase. These few inches give way to the frenetic chiaroscuro of the petals against the negative space of the hot-pressed Bristol paper’s smooth surface. 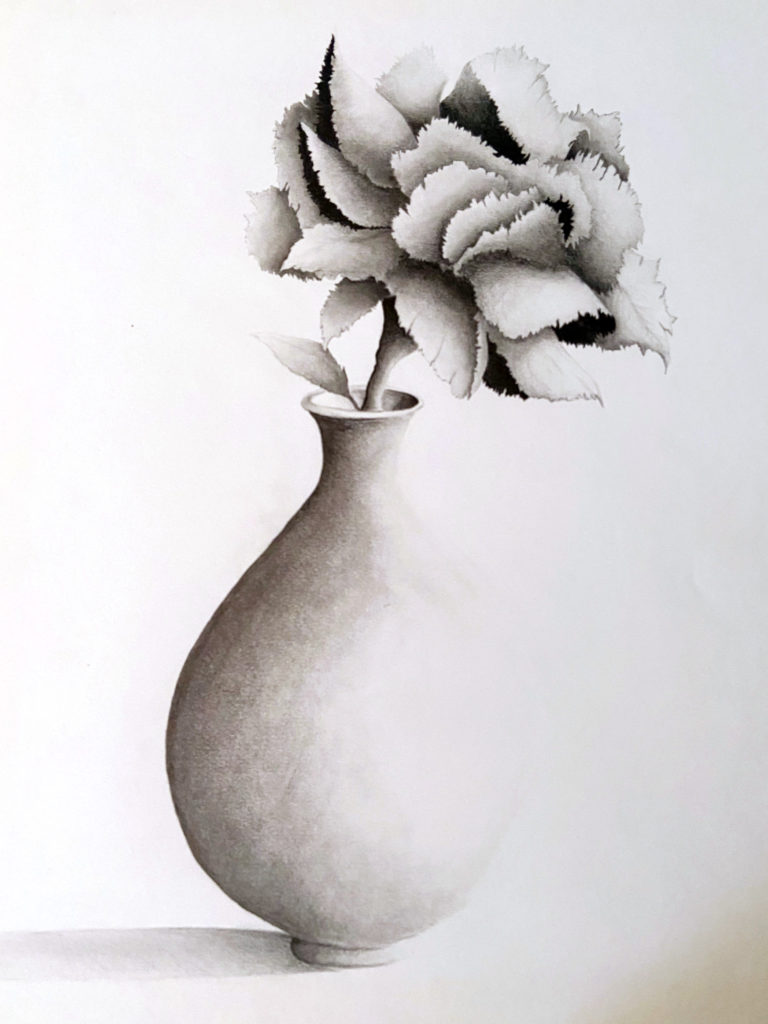 Grant Wood’s American Gothic is sometimes mistakenly thought to be a painting of a farming couple, resolute in their solidarity. In fact, it is a painting, many complicated generational layers deep, of conflict. The stalwart father stands with his shoulders squared to the viewer, the lines of his pitchfork mirrored in the pane of the gothic-arched window behind them. His steadiness on the land is ancient, reverent. The daughter’s steadiness beside him, however, is a seeming. Her hair is pulled back, save for a strand that falls elegantly behind her right ear, opposite her father. And while the pattern on her apron is mirrored in the curtains behind the arched pane, visually embedding her in the background, it is the turn of her head to our right that betrays her.

My drawing is clunky in its rigidity and immature in its way. It is a long way from American Gothic, but I was careful to draw the flower’s head leaning to the right, like the head of the daughter in the painting. They both are looking away. Their turn is determined and disrupts.

Grandpa has no formal education but always had a draftsman’s dexterity with a pencil. A carpenter by trade, he’d sketch house plans with precision and draw, with fervent attention to scale, the furniture he’d build. To my child’s eye these drawings were little graphite miracles. By the time I was a teenager, I could see his drawings’ weaknesses: the predictability of the line weight, the inattention to value contrasts, the gestural tropes he couldn’t think beyond.

The Midwest is not an uncomplicated place. There in the foothills of Appalachia, I was young and the adults of my youth seemed to be mostly suffocating beneath their blue-collar jobs but were quick to claim their pride in being blue-collar people. Some became tired. Others, like Grandpa, became mean. As he aged, he folded so tightly into himself as to make even standing in place look pained, as though he could hardly bear the skin he was in.

The drawing was a gift for my mother on her fiftieth birthday. I wanted her to have it, but I also knew Grandpa would see it there, at the party, among family and friends. He and I would watch everyone share the knowledge that he couldn’t have made the drawing. I wanted to take something away from him.

The drawing was laid out on a table, and Grandpa leaned over to study it. He stared, his nose inches above the gray vase. He straightened but looked intently at something near the floor and said something about how he used to think he could draw. It wasn’t clear to whom he was speaking, but it was clear that something in him was injured.

If you were looking to purchase one, you’d need to look for a taboret, but it is really just a studio workbench. A tall, wide table sits over five drawers with a vertical door on either side. It is made of wood and unnecessarily heavy.

Grandpa built houses for decades, and then he made small things in a workshop. Now, he sits by a window. I have to take care not to think of him in past tense.

I asked him to make the bench for me because I wanted to love him, or at least be friendly. I was living away from Ohio while he was working on it, but I imagine the carpenter’s pencil behind his right ear, only ever sharpened with a knife so that the pencil’s lead emerges from a craggy grouping of planes rather than forming a smooth point. I imagine him in the woodshop working, alone in the boredom of an aging body, funneling meanness, or frozen kindness, into wooden corners that fit with pathological exactness. Fingers thick at the knuckles but forever dexterous.

When I hear my parents’ voices lilt with Midwestern shame, our pernicious lineage, I want to set the bench on fire or bury an axe head into it. I dreamt once of beaver teeth gnawing it to death. On days when I do not anthropomorphize it into oblivion, it is a pretty good workbench.

Famous people, wealthy people, have seen my bench, leaned on it and put their coffee cups on it while needing their hands to gesture. I know what Grandpa would think of these people. They’d speak to him the way the privileged speak to those with poor grammar, delicately.

Some days the bench is a monument of failure, but mostly it is a kindness spoken in the language he and I are allowed. I’d like to think it is an embassy for us, safe haven between territories.

I use it often, and it is flecked with years of paint and charcoal and turpentine. Every time I clear it of paint rags and piles of brushes I am thankful for the usefulness of its surface, and those drawers that open with graceful ease.

Andrew Hendrixson is a writer and artist based in Seattle. A graduate of the Yale Institute of Sacred Music, his work has appeared in New American Paintings and Princeton Theological Review. He was a 2020 artist in residence at both the Byrdcliffe Art Colony and the Chautauqua School of Art.